The Nationals' war on foreign investment in agriculture continues with more red tape in the water sector.

While Deputy Prime Minister Barnaby Joyce’s peculiar economic and fiscal views pose a threat to foreign investment, jobs and growth, yesterday there was a small example of his impact on issues that get less public attention.

Yesterday Joyce, who as Agriculture Minister holds responsibility for water, jointly released a consultation paper on imposing a “national register of foreign ownership of water access entitlements” with Treasurer Scott Morrison, a man who seems unable to tell the difference between a car and a house, let alone provide economically rational pushback against agrarian socialist idiocy.

Under pressure from the Nationals’ hostility to Chinese investment in agriculture (the Nats have traditionally had no concerns about the British, the Americans, the Kiwis, the Canadians or the Europeans owning agricultural production in Australia), the allegedly anti-red tape Abbott government slapped reporting requirements on foreign investment in agriculture (and real estate) last year. Now the water market is in the Nats’ sights as well.

The consultation paper doesn’t actually explain what the purpose of such a register is. All the paper says is that it will “enhance transparency” and “should assist in informing the Government and the community about emerging investment trends”. Normally that’s the sort of meaningless red tape this government pats itself on the back for sweeping away. What, precisely, is the concern about foreigners? Are the Nats concerned about Chinese investors somehow spiriting away all our water, like they’re stealing all our arable land and flying it back to China, tonne of precious topsoil by tonne of precious topsoil? And what about all those Chinese real estate buyers in cities like Sydney and Melbourne? Maybe they should be watched to make sure they don’t send back jerrycans of water to China.

Only last week, Infrastructure Australia produced an extensive report that covered, among many other issues, the success of the national water initiative over the last decade. “The flexibility and autonomy offered by water trading has increased agricultural production, helped farmers and communities to survive severe drought, and provided the mechanism for recovering water for the environment,” IA concluded.

The Nats, and Joyce, have always hated water trading. Right from his early days in politics, Joyce was railing at water trading. And when the Abbott government was elected, the Nats got something they’d long hoped for: the elimination of the National Water Commission, which oversaw the successful development of the national water market and drove the slow process of overcoming parochial resistance from the states and irrigators to achieve productivity gains in agriculture.

In fact, Infrastructure Australia, without directly rebuking the government for killing the commission, last week recommended “an independent national body to deliver a National Water Reform Plan and drive market reforms across the metropolitan and regional water sectors”, which is the National Water Commission, with an additional metropolitan remit.

And the function of the commission was, officially, to “assess, monitor and provide advice and recommendations on priority national issues related to water management in Australia”. Sounds a lot like the sort of body you might ask to tell you how many foreigners owned water rights … 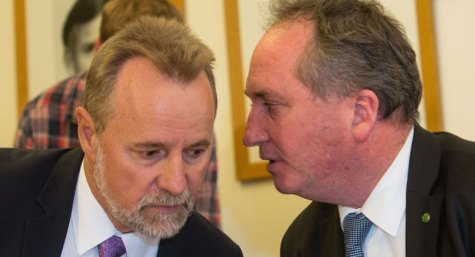 Ellison out, Nationals change leader in the Senate

A northern food bowl? Katter’s heard that one before

That is an on-water issue and is confidential

We might joke of our farmers fearing losing “… tonne of precious topsoil by tonne of precious topsoil”. But that is just what farming does, causing land to shed soil faster than it is being created by weathering. Having lost its balance of respiring vegetation, the (unmanaged) water table rises and salinates the root zone, accelerating the rate of loss. Worldwide the capacity of conventional farming to feed the population is shrinking even as the latter expands.

Isn’t there some sort of tie in with water rights and one of the loonier American religious cults? Melbourne/Sydney charter.)

Bernard, don’t you realise what a fraught issue water use is in Australia, the driest continent? Whether foreign-owned or not, agribusinesses using huge amounts of water can have dire consequences for the rest of us.