Tim Wilson let his colleagues on the Human Rights Commission know he would be resigning just a few hours before the Herald Sun let John Q. Public know the same.

Human Rights Commissioner Tim Wilson told his fellow commissioners he was resigning just a few short hours before telling the media that he was running for the seat of Goldstein, according to Wilson’s resignation email, obtained by Crikey.

At 9pm AEST on Sunday evening, the Herald Sun first reported what many had already speculated, that Tim Wilson would be running for Liberal preselection for the blue-ribbon seat of Goldstein, following the announcement that former trade minister Andrew Robb would retire at the upcoming election. As a result, Wilson had resigned from his $400,000 per year, taxpayer-funded job as Human Rights Commissioner.

Emails obtained by Crikey under freedom of information law reveal that Wilson notified his fellow commissioners at 4.56pm AEST, just hours before the story appeared online, and he asked them to keep it to themselves. 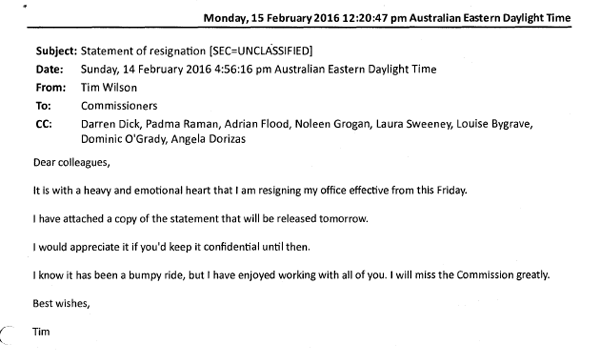 Wilson submitted his resignation with a “heavy and emotional heart” and admitted to colleagues it had been “a bumpy ride” during his time at the Human Rights Commission, but said he would “miss the Commission greatly”.

Wilson has served as Human Rights Commissioner for two years, after being appointed by Attorney-General George Brandis without the same sort of rigorous selection process that was undertaken for the new Sex Discrimination Commissioner Kate Jenkins.

Brandis this week said that Wilson had “single-handedly reshaped the human rights debate in Australia”, swinging it back from being “dominated by the priorities and prejudices of the left”.

Today marks Wilson’s last day as a Human Rights Commissioner before he will officially enter the preselection battle. His biggest rival is expected to be Alexander Downer’s daughter Georgina, who already has the support of former Victorian premier Jeff Kennett. Kennett was critical of Wilson speaking to media this week about his resignation from the commission while being careful to not talk about the preselection process, which is against party rules.

Wilson resigned his membership of the Liberal Party — in which he had been active for two decades — to take the role of Human Rights Commissioner. He will need to rejoin the Liberal Party in order to join the preselection contest. Considering the prospect that Wilson is unsuccessful in his bid for Liberal preselection and suddenly finds himself out of a job, Wilson said this week that “fortune favours the brave”.

It has been reported that neither Wilson nor Downer currently live in the Goldstein electorate, but in his resignation letter, Wilson said he had lived in Goldstein in the past, much of his family still lives in the electorate, and he had served on the board of the local hospital.

Does anyone else who’s read 1984, find it vaguely unsettling that Freedom Boy plans to run in the seat of Goldstein ? It’s getting all too weird.

I hope the good folk of Goldstein flick both Wilson and Downer. By the way, has not Wilson heard of the demise of the age of entitlement? Will he ask for his job back if he fails to be preselected?

It is with a heavy and emotional heart that I ponder Wilson representing an Oz electorate.

C’mon Zut, Have some compassion TW is taking the emotional toll of tearing himself away from his beloved Commission. He says that he will miss working with them, which could of course mean that he will ignore the Commission completely but, on the other hand, no politician has ever done that. I await. Unless of course he doesn’t get pre-selection or elected. Politics is a fickle game.

It is with a heavy and emotional heart that I ponder Wilson representing an Oz electorate especially mine! I’m calling on all Goldstein residents to join me in rising up against this IPA plant.

Let’s cast him back into the shadows where he belongs as one of the faceless IPA back room drones!