Did the ABC sneak into Nauru? And other media tidbits of the day.

ABC sneaks into Nauru? As Crikey neared deadline, the Republic of Nauru Twitter account said that the country would be changing its visa processes after the ABC “dishonestly entered [the] country as a tourist and failed to declare they were media”. Another tweet slams the “sadly deceptive” behaviour that “disadvantages others”. The tweets was deleted pending more information — the account said a statement would be issued shortly.

Apart from Chris Kenny, no journalists have been able to enter Nauru for 18 months. The ABC has been contacted for comment.

No wonder they love that negative gearing. Fairfax Media had its Domain real estate business and the purchase of the other half of MMP to thank for the reported small improvements in earnings and revenue in the December half year, In fact if it had not been for the real estate boom in Sydney and Melbourne boosting revenues and earnings at Domain (which has also helped power the results of News Corp’s 64% subsidiary, REA Group), Fairfax would have struggled to make a profit in the latest half year.

It is clear looking at Fairfax’s ASX report that without the sharp rise in EBITDA from Domain in the half year, and the smaller rise in digital ventures, and whatever MMP contributed, the small, $1.1 million rise in net profit would not have happened. Indeed, the result would have been a sharp fall. And Fairfax might not have been able to pay the 2 cents a share dividend, leaving the company weakened. Fairfax said it had net cash at the end of December of $6 million (that’s netting cash against debt). It paid out $111 million in a share buyback, which, given the weakness of the non-Domain parts of the business, looks to have been a bit excessive.

These results (and those for the September and December quarters for News Corp and REA Group), underline how the fortunes of the countries two major newspaper groups remain firmly tied to the real estate boom (and perhaps why there’s a questioning of the Labor Party’s crackdown on negative gearing and changes to the capital gains tax?). If the property boom fades, both companies — Fairfax more so — will struggle.

These results also help understand the latest re-organisation of the print side of the SMH and Age and the decision to give greater primacy to the websites. Domain is keeping the whole creaky edifice that is the trio of papers and some of the regional dailies afloat (at least in their present form). Should the property boom cool rapidly, then who knows what will happen to Fairfax print? — Glenn Dyer

God Gannett! America’s biggest newspaper group, Gannett Co, has joined the “club” of US print media companies suffering from weakening ad and sales revenues. The New York Times, News Corp, Time Inc and others are in the same boat. Gannett, whose major publication is USA Today, said this week that fourth-quarter revenue fell 9.7% thanks to continuing falls in advertising sales and circulation revenue.

And the pressure isn’t going away this year as Gannett’s advertising revenues will fall another 5% to 7% and circulation revenue by 2% to 4%. The company, though, believes rising digital ad and other revenues will offset those falls.Overall digital advertising revenues account for about a quarter of the total company-wide revenues, and at USA Today digital revenue gains are now top print revenue falls. Digital-only paid subscriptions rose to 125,000, still way short of The New York Times (1.041 million at the end of December), and The Wall Street Journal on 819,000.

Gannett is in the process of acquiring Journal Media, the owner of the Milwaukee Journal Sentinel and other newspapers, in a US$280 million deal. Journal Media shareholders are set to vote on the deal March 1. It also bought 15 small local papers as well in 2015, so it is still backing print. — Glenn Dyer

Woody’s wonder. Amazon has bought the latest Woody Allen movie to add to the six-part TV series the veteran movie maker is making for the online giant. US media websites are reporting that Amazon bought the unnamed film — which stars Steve Carrell, Blake Lively, Kristen Stewart, Jeannie Berlin and Jesse Eisenberg — and plans to show it in US theatres, before making it available to subscribers on its Prime Video service. The movie is set in New York in the 1930s. Amazon will need a film studio to release the film into cinemas. Allen has released his last seven films through Sony Classics. Deadline.com quoted Allen as saying:  “Like all beginning relationships, there is much hope, mutual affection, and genuine goodwill — the lawsuits come later.” Allen is writing and directing the six-part TV series, which stars himself, Elaine May and Miley Cyrus. — Glenn Dyer

Front page of the day. The Ballarat Courier’s front page has run images of the young victims of institutional sexual abuse “who have since died because the abuse was too great to bear” … 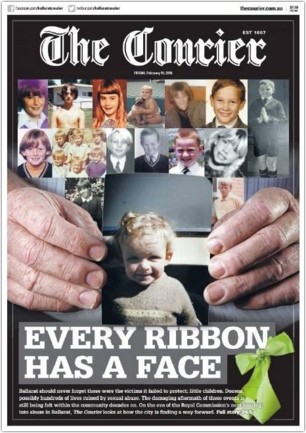 Speaking of negative gearing and the print media…..I’ve noticed our local rag (in the News Corp family) has a real estate “boom” story on just about every front page. I can’t help feeling they are trying to pump up the market because of their association with flogging real estate.

“Apart from Chris Kenny, no journalists have been able to enter Nauru for 18 months.”

You could’ve ditched the first four words of that sentence and it still would’ve been accurate.

Journalists tend to be more interested in having a colorful story than one which is accurate and deals with an important issue, aren’t they.