The Republic of Nauru said it had changed its visa policy because the ABC had "dishonestly entered the country as a tourist". But the ABC says no ABC journo did any such thing. Crikey journalists Josh Taylor and Myriam Robin report.

The ABC has said no ABC journalists have entered Nauru on tourist visas, in contrast to claims made by the government of Nauru.

The Republic of Nauru Twitter account tweeted this morning that the country would be changing its visa processes after the ABC “dishonestly entered [the] country as a tourist and failed to declare they were media”. Another tweet slams the “sadly deceptive” behaviour that “disadvantages others”. The tweets were deleted, and a statement was issued stating that “some media representatives” had entered Nauru on false documentation:

” No visas held by Australian and New Zealand workers who enter Nauru for legitimate work reasons are affected. Holders of visitor visas to Nauru should contact the Consulate of Nauru in Brisbane if further information is required.” 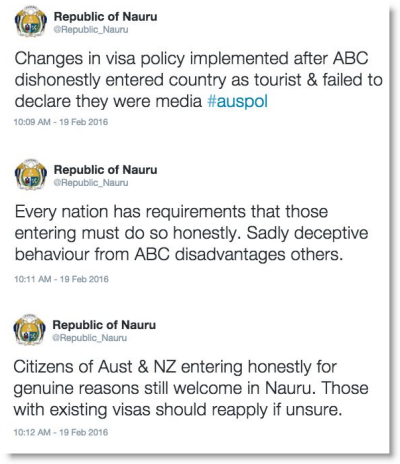 Despite deleting the tweets naming the ABC, and ABC not being named in the subsequent release, the Republic of Nauru Twitter account said it “stands by info in tweets deleted about journalists entering illegally”.

It’s not the first time the Nauruan government has picked a fight with the ABC over its reporting of immigration detention on the island nation. Australian PR Lyall Mercer has, while representing the government of Nauru, in the past refused to answer questions from 7.30 reporter Hayden Cooper, for example, telling him in an email: “Due to continued unbalanced and inaccurate coverage of Nauru by the ABC we will not respond to this request.” and “We can only assume that the ABC does not wish to report the facts and that political activism has replaced ethical journalism, therefore we will not be cooperating on this occasion.”

Apart from Chris Kenny, no journalists have been able to enter Nauru for 18 months.