Baird under top protection. Is NSW Premier Mike Baird so concerned about the reaction to Sydney’s lockout laws that he is installing bullet-proof glass? A request for information uploaded to the NSW government’s eTender website this week shows that the Department of Premier and Cabinet is researching “bullet resistant glazing”. According to the notice, they are looking for:

“Potential providers/suppliers that can retro fit a high-rise commercial window curtain wall(s) that will adhere to the Australian Standard A/NZS2343:1997 (Bullet-resistant panels and elements) for bullet resistant glazing, designed and applied to an R2 rating.”

It’s not an official call for tender yet, but a scoping exercise. So why is bullet-resistant glazing needed? Have threats been made against the Premier? A response from the Department of Premier and Cabinet says it’s not so:

“While there is no immediate threat, the safety of visitors, staff and contractors to state government facilities is of paramount importance to the NSW Government. Following formal threat and risk assessment by appropriately qualified external advisers, and advice from NSW Police, the NSW Department of Premier and Cabinet is investigating several options to strengthen infrastructure, including but not limited to windows. Security expenditure is considered through normal budget processes.”

Changes at The Courier-Mail. While Paul Whittaker has made his presence felt at The Australian, we hear the mood is quite different at The Courier-Mail, where former Townsville Bulletin editor Lachlan Heywood took over from Chris Dore. According to one tipster, Heywood is still “finding his feet” and is very different to Dore. According to one source Dore “had his foot on everyone’s throats”, pushing journalists hard for good stories, but that pressure is no longer felt. We hear that at a “town hall”-style meeting with staff last week, hints were made that the paper could be allocated more investigative resources. Another tipster has also reported that editor of the Sunday Mail Peter Gleeson, who missed out on the editor gig when it went to Heywood, could be on the way out, possibly to Channel Nine. But Gleeson tells us there’s no truth to that rumour. The Courier Mail‘s newsroom does sound like an interesting place right now.

Odd bedfellows. When he was in power, Jeff Kennett famously tried to block out The Age, refusing all media requests and engagement in a bid to unseat then-editor Bruce Guthrie. Which is why it was interesting to see Guthrie and Kennett on the same page in the Oz today, lamenting the Sydney-fication of The Age. Guthrie, of course, now runs New Daily, while Kennett is a News Corp columnist (in Age rival the Herald Sun). Not that you’d pick that up from the Oz’s report.

Future PM? Doesn’t look like it. Controversial deputy mayor of the suspended Auburn Council Salim Mehajer has attacked two of his fellow councillors on his Facebook page, calling them dole bludgers. The post addressed to Irene Simms and George Campbell comes after the new administrator of the council scrapped a contract to sell a council carpark to Mehajer, who is also a property developer. Mehajer, who has said in the past that he hopes to become prime minister, referred to the council as “the government” in the rambling post in which he defended his practice over the sale and appears to accuse the councillors of racism. The cancellation of the sale is expected to cost Mehajer up to $10 million in profits from a potential development of the carpark. He closed the post with this message:

“P. S – it appears that everyone must be reminded of their positions in life, every so often..and indeed i’d like to remind the two of you ‘dole bludgers’ that It is I, and indeed people like myself that is paying for that slice of bread and capsule of butter sitting on your kitchen table…

“Jealousy is a disease”

Good day to you both”

We got 419 problems. It’s been a couple of days since there was some bad news about Crikey’s favourite boondoggle, the F-35 fighter, but this week the head of the F-35 program was defending the plane against recent criticism. In the course of his defence of the plane that, variously, can’t fly, can’t shoot, can’t dogfight and is riddled with major software flaws, Lt. Gen. Chris Bogdan said that there were currently 419 problems with the F-35 “that we have yet to decide with the war fighters how we’re going to fix them, whether we’re going to fix them and when we’re going to fix them”. But that’s OK, because that number is down from over 1200 a couple of years ago. We like the number 419, though — those Nigerian scam emails are commonly known as “419 scams”, and we can’t think of a better parallel for what the taxpayers of a number of Western countries have been subjected to with this dog of a plane over recent years.

Feline friends in Parliament. Every now and then the pets of Australia’s politicians take their rightful place in the media spotlight, such as Kevin Rudd’s Jasper and Abby, Julia Gillard’s puppy Reuben and Senator David Leyonhjelm’s many libertarian cats. Now a Twitter account works out one of the most important vote winner — whether or not our MPs are cat people. @APHCatWatch popped up yesterday and has been asking pollies if they own moggies. So far the responses have been mixed, with Greens leader Richard Di Natale saying he owned many animals, but not a cat. Rob Mitchell confirmed he had a cat called Hank, and Julie Collins tweeted a photo of her kitties Tori and Toby. 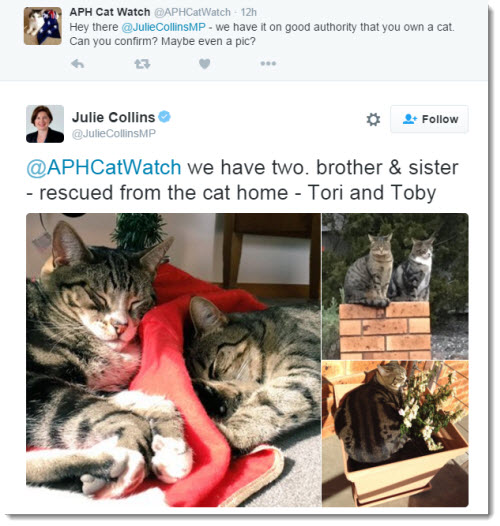 We hope this leads to a scientific analysis of which MPs own cats, which are dog people and whether that correlates along party lines.

I like to know who has the least common pet, axolotls, alpacas or carnivorous plants.