Will Fairfax's new editorial structure push its mastheads further down the road to clickbait and shareable online content?

Readers of The Age and The Sydney Morning Herald will no longer be able to look to the morning’s paper for fresh news and investigations, as Fairfax intends to downgrade the importance of its newspapers to promote its online offerings. Under a new structure unveiled yesterday, editors of the papers will no longer work closely with journalists and commission stories; instead, the print editors will scrape together material already put on Fairfax’s websites to fill their papers. The new power is the head of digital channels (the online editor), to whom the section editors will now report, as well as reporting to the editors-in-chief of both papers.

Fairfax journalists understand the tone of the newspapers will also likely change, to the lighter, more popular offerings that drive the Fairfax websites. There are no immediate plans to axe the print editions of the Age or SMH, but the new structure would make a decision to stop printing papers altogether easier.

An organisational chart of the proposed new structure leaked to Crikey shows the isolation of the new print editors.

The head of print channels, to whom the Monday-to-Friday and weekend editors of The Sydney Morning Herald and The Age will report, has no reporting lines connecting him to the journalists and section editors who will write the stories for the mastheads. The head of print channels does not even appear to report to the editors-in-chief of both papers, but reports directly to Fairfax’s editorial director. The publishing of print papers appears to be an activity now separate to the journalism done at Fairfax’s most famous mastheads. 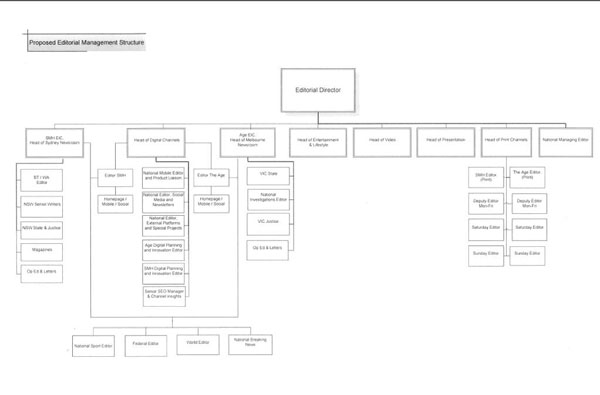 Journalists at Fairfax are fearful the primacy of online will result in the journalism at both mastheads going further down a route of clickbait and shareable online content, and away from the broadsheet journalism typically associated with the company. The prospect was raised with publisher Sean Aylmer at an hour-long meeting with Age staff in Media House yesterday (that Aylmer told staff not to tweet about or leak details of — for all the good that did). Asked how the papers would continue to run stories with more gravitas when the online sections often prioritised lighter stories, Aylmer responded by asking journalists why the papers could not just print the lighter stories. Presumably due to the departure of editor-in-chief Andrew Holden yesterday, Age staff were briefed before those at the SMH.

The culture at Fairfax’s online desks is ruthlessly traffic-focused. The online editors are tasked with maintaining and growing Fairfax’s 8 million monthly impressions (across both the SMH and Age websites). The vast bulk of traffic to Fairfax’s websites is directed at stories that do not, currently anyway, appear in the print papers.

Sitting under the online editors, and reporting to both the editors-in-chief of both papers, are the national topic editors, who will manage journalists across both Melbourne and Sydney when it comes to things like sports, politics and international affairs. A large group of journalists will work a round based on their state and report to the relevant editor of the SMH or the Age. State-based rounds like law and order, health and education will still report to someone in their own newsroom, rather than someone working nationally.

There were concerns yesterday that the restructure would have the Sydney newsroom reign supreme over The Age. But a day later and after staff were briefed by management, many now view those fears as premature. While it’s possible, if most of the topic editor roles are based in Sydney, for the SMH newsroom to gain some greater influence, the retention of a separate editor-in-chief for The Age, as well as a separate state editor for Victoria, has assured some that Victorian issues will still be well covered.

Gone are the AM and PM news directors at both mastheads. The positions, unique to Fairfax, operated something like chiefs of staff at other papers. Taking over many of their duties will be the new topic editors.

Yesterday was a day of great confusion at The Age. Senior managers were in meetings all morning, and in the meantime rumours swirled of the abolition of the editor-in-chief position, of Melbourne becoming a bureau, rather than a main newsroom, and even of the print editions being closed down. “There was an element of paralysis in the building, it was pretty stressful,” one journalist said.

But when the managers started speaking to sections later that day, fears of Sydney swallowing The Age subsided. Also helping things is that it appears management is not cost-cutting through the latest exercise — staff were assured there’d be no reduction in their numbers.

Tributes flowed yesterday for Holden, who briefly addressed staff at the meeting. As of this morning, some still reckon Holden was pushed, though it is always possible he left because he didn’t like the new changes. Fairfax’s official statement put it as Holden “decid[ing] to leave”. Asked if Holden had been sacked, a Fairfax spokesperson told Crikey yesterday afternoon that his departure was “by mutual agreement”. Make of that what you will.

Holden had emailed staff on February 10, saying: “I hope to have the new online editor in place early in March.” Needless to say, Holden will be gone by then — he finishes up next week. Whatever his departure was, it appears to have been sudden.

God help us. I cancelled my online subscription to SMH because the predominance of clickbait trash was becoming too much to bear. I understand that quality news media is in financial trouble, but I’ll be damned if I’m paying for fatuous Facebook-friendly crap. I can get it for free elsewhere.

Goodbye Fairfax. You were great once upon a time.

Really disappointing to read. I’ll give Fairfax a few months to see how it turns out, but I don’t expect it’ll be pretty.