Bad luck, Kerry. And other media tidbits of the day.

Cost-cutting had readers’ editor go at SMH. Former SMH editor-in-chief Peter Fray is now in America, where he’s studying entrepreneurial journalism at City University in New York. Writing on CUNY’s Medium profile, he muses about, among other things, his experiences on how the Australian media treats readers:

“I also know that despite the co-dependence of journalists and their readers (certainly from the journo side), many editors still have trouble seeing the relationship as an equal partnership or in fact one in which the audience should by rights have the upper hand.

“A small example: one of my proudest moments as editor-in-chief of the Herald was to establish an independent in-house readers’ editor/quasi ombudsman, a senior member of staff whose job it was to question the decisions, practices and methods of the masthead and its editors in response to reader inquiries.

“Soon after I left the Herald, my successor closed the job down. His rationale: why waste good money paying someone to shit in the paper’s own nest. Sure, he’s more than entitled to make hard calls. They were and still are tough times. But what sort of message did that action send to the readers? They are the last people you want to put off side. Right?”

Fray established the reader’s editor position at the SMH in 2011, at a time when many other Australian papers were also turning to such positions to foster trust with their readers. The Herald’s inaugural readers’ editor, veteran subeditor and staff trainer Judy Prisk, took redundancy after a little more than a year and was replaced by a “community editor“, which is a rather different type of position that involves curating the best reader letters, comments and posts rather than using them as a jumping-off point to critique the paper’s coverage. — Myriam Robin

Bad luck for Kerry. You can dominate the ratings and hold the biggest share of TV ad revenues for yet another half year, but as we have seen in the past few years, that doesn’t translate into rising profits for Seven West Media.

No massive impairments this time round, but trading conditions are still tough and the outlook hasn’t brightened, so after another round of cost cutting, it’s more of the same for Seven West Media, which chopped the interim dividend by 33% to just 4 cents a share for the half year to December 26. Revenues fell 4% to $896 million, earnings before interest, tax, depreciation and amortisation fell 4% to nearly $186 million, but net profit after tax rose 2.1% to $140.37 million.

A year ago the operators of the Seven Network, owners of The West Australian newspaper and Pacific Magazines, revealed nearly a billion dollars (after tax) of impairments and write-downs, producing a massive first-half loss, which continued to the full-year loss of $1.8 billion. A sliding share price, falling ad revenues in the newspapers and magazines businesses and weak outlook for TV forced the impairments on the company, which is dominated by diminished billionaire Kerry Stokes.

The group’s profit margin (based on earnings before interest, tax, depreciation and amortisation) dipped to a still solid 25.7% from 26.6%, the TV profit margin edged up to 29.8% from 28.4% (still very profitable, despite the revenue drought), but newspapers profit margin slid to 28.6% from 31.3 and Pacific Magazines’ profit margin slumped to just 7.6% from a weak 12.2%, raising more questions about the future of the business (those December quarter and 2015 circulation figures were very weak for Pac Mags). At best Seven West is marking time, at worst it is slowly going backwards. And it is one of the better run media businesses in the country. — Glenn Dyer

Is depression an excuse? Beyondblue ambassador Oliver Shawyer has weighed in on the media coverage of the Garry Lyon saga in yesterday’s Mumbrella. The central question he seeks to answer is “Has the media set up depression as a justifiable excuse for people’s mistakes?”, and the column is a fierce attack on what he sees as an irresponsible media’s coverage of a potentially life-threatening condition:

“I feel our media may be setting a very dangerous precedent: associating depression with excuses — something you can use to explain your behaviour during tough times, because that’s the way it’s being presented in the media.

“As professional writers, whether for traditional newspapers, online publications or social media posts, you have a duty to give the topic the justice and context the respective stories deserve. That the respective sufferers deserve. If depression is central to the story, outline why. Don’t just throw it in. Lazy journalism reproduced from press releases supplied by those with an interest in protecting a client rather than communicating a truth will prove to be very dangerous.

“Writers must grasp the significant reality that ‘off-the-cuff’ comments and throw-away statements of depression to potentially justify a piece or sell a story can be the difference between someone fighting for another day or giving up then and there.”

Paper pains. The Telegraph in London is heading for an unknown number of staff cuts as hiring and pay rises remain frozen until a review of the paper ordered by the owners, the reclusive Barclay brothers, is completed in a couple of months’ time. London media reports have fleshed out earlier reports of the review, being conducted by Deloittes, the accounting and services group. Called a strategic review, the examination of the paper’s costs and staffing has raised fears of job cuts.

The Press Gazette published figures overnight showing that employment at the paper is at its highest — 662 people — since the Barclay twins bought The Telegraph and The Spectator 12 years ago for 665 million pounds, (around A$1.4 billion). Employment dipped to 577 in 2007, but has risen as the paper has expanded its digital publishing operations and website.

In the same time, revenues have hardly changed — 318 million pounds in 2014, the last published figure, compared with 313 million in 2004, the year the paper was bought. Operating profit though has risen to 46 million pounds from 31 million in 2004, but it peaked at 60 million pounds in 2010, meaning there has been a steady slide in the past five years while revenues have gone nowhere. A spokesman for the Barclay brothers told The Press Gazette that the there were no plans to sell the Telegraph Media Group or any part of it. So the media reports say staff are resigned to sweeping cost cuts and job losses later in the year. — Glenn Dyer

Video of the day. The song everyone is talking about …

Front page of the day. Stuart Robert’s apologia in the Gold Coast Bulletin … 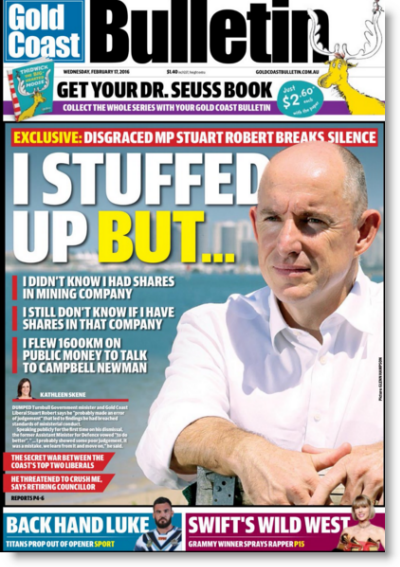