Isentia Index: Major reshuffle after PM loses five ministers in as many months

The revolving door of Coalition ministers continued this week, thanks to Turnbull's dynamic reshuffle.

Prime Minister Malcolm Turnbull started with a revamped ministry this week after losing five ministers since becoming PM last September, announcing on Saturday that NSW Senator Fiona Nash, Victorian Nationals MP Darren Chester and QLD Liberal MP Steve Ciobo will be stepping up to Cabinet, along with a range of new Ministers and Assistant Ministers. He said for the first time the Coalition has two female deputy leaders, with Nash — entering our index this week in eighth place — named deputy of the Nationals under new leader Barnaby Joyce. Warren Truss, Stuart Robert, Ciobo, Chester, Mal Brough, Jamie Briggs and Ian Macfarlane have all moved up this week’s top 20 with announcements of retirements and sackings.

Asylum seekers were also a top issue in media over the week, with a Brisbane hospital refusing to discharge a baby facing removal to Nauru, and the PM saying no decisions would be taken which would “imperil the health or security of any individual”, but confirming a strict policy to deter people smugglers. The government ruled out increasing the GST but Scott Morrison, down two places this week in seventh, and Opposition Leader Bill Shorten, in fifth, have switched focus to negative gearing reform, with the government arguing that the middle-class also benefit from the concessions and Labor pledging to limit negative gearing and capital gains tax discounts ahead of the next election.

Meanwhile, the PM also fielded calls from over 2,800 scientists from 60 countries to reverse cuts to the CSIRO’s climate research, which will reportedly result in close to 60 Australian job losses. 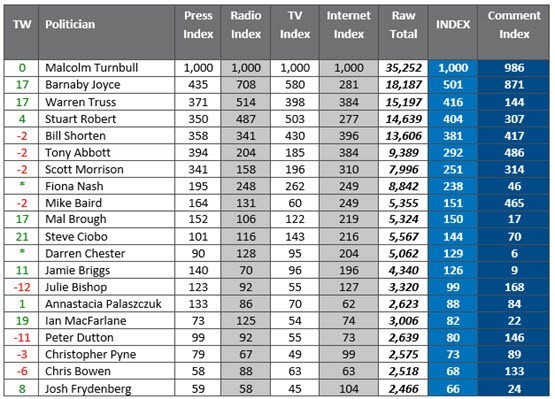 The PM posted a Valentine’s Day picture of himself and wife Lucy across his social platforms on Sunday, which some took as an invitation to discuss same-sex marriage…

…While talkback was more interested in Joyce as our new Deputy PM and leader of the Nationals.

Comedian Tim Minchin pulled no punches in ‘asking’ Cardinal George Pell to come home in a song that received plenty of coverage. Pell claims he is too ill to travel to Australia and give evidence to the Royal Commission into Institutional Responses to Child Sexual Abuse. He plans to testify via video link from Rome.

Didn’t Nash mislead the Senate, (then bravely refuse to stand down) in the early months of the Abbott government?