Was Lawrence Mooney right to call a journo a ‘deadshit’ over a bad review?

It’s true that comedians have been particularly poorly served by critics in Australia. All the same, Lawrence Mooney's reaction to a bad review in The Advertiser was over the top.

Lawrence Mooney has been a comedian for 22 years, working extensively in stand-up and on TV. But last night a review of the Adelaide Fringe season of his new stand-up show Moonman set Mooney off. The review, by Bella Fowler, a young writer for Adelaide’s Advertiser prompted a furious response from the Australian comedian.

As part of a lengthy Twitter tirade, the Dirty Laundry Live host had the following to say: 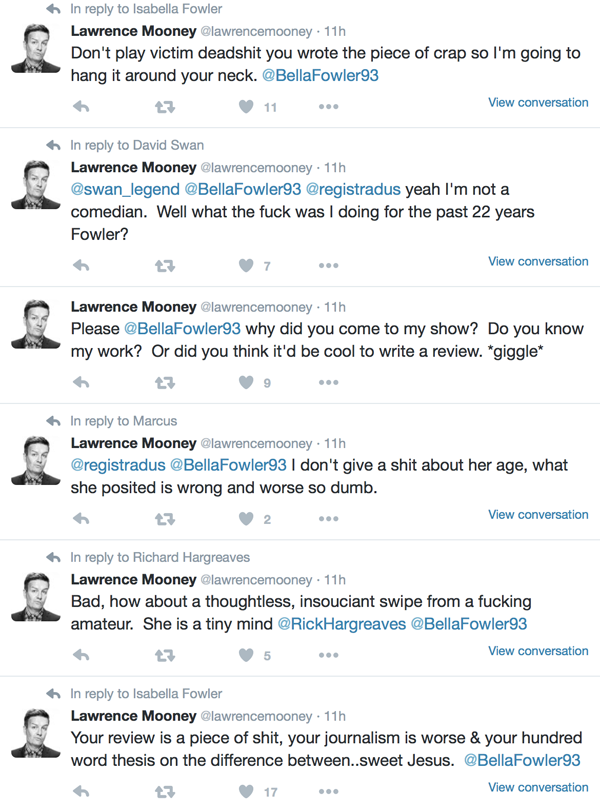 Here’s the review that, thanks to Mooney, is going to get infinitely more traffic than it would have otherwise.

It’s a total dummy spit on Mooney’s part, for sure. And his tweets turned what could have been an intelligent and respectful conversation about criticism into a personal attack (you can be pretty robust and forthright without calling somebody a “deadshit”.) This piece is not to defend his (over)reaction.

But is there a genuine complaint at the core of what Mooney is saying?

Well, yes. Comedy reviews published in professional Australian publications vary extraordinarily in terms of quality and the experience of the reviewers. It’s become standard now for newspapers to offer review tickets to any staff writers in their newsrooms with an interest in reviewing comedy, even if they don’t have a wide range of experience in any kind of critical writing.

We’ve employed similar practices at Daily Review for some festivals where there have been particular shows that we’ve wanted to cover but our regular contributors haven’t been available. But I like to think we’ve at least spent the time as editors to ensure the reviews we publish are fair, reasonable, accurate and decent pieces of writing.

The situation is slightly different with Fowler, who has written album reviews and some live performance reviews over the last few years — although her primary writing gig is as a real estate writer with The Advertiser.

But the review opens with the extraordinary assertion that Mooney might not actually be a comedian (a pretty big call from somebody with limited experience in reviewing comedy) and has almost nothing positive to say about him. Yet somehow the show has been awarded three stars, which seems strangely high, given just how scathing the review is.

A few people on social media have said they can’t believe Mooney lost his shit over a three-star review, but the incongruous star rating — her review reads more like a one or two-star write-up — raises questions about whether or not Fowler’s editor has given her the support she needed as a developing critic. An editor should probably ask “are you sure about this star rating?” if it seemed as bizarre as this one did (and maybe they did — there’s no way of knowing).

Fowler’s review was not a particularly insightful piece of writing, but Mooney’s response was pretty disproportionate. I suspect it was mainly a reaction to the idea that he mightn’t be an actual comedian, and some broader concerns that comedians have about local reviews.

There’s a regular gripe that Australian newspapers, in particular, are using inexperienced critics to review their shows. Every year at Melbourne International Comedy Festival (the third largest comedy festival in the world) there’ll be a handful of comedians who spit the dummies over bad reviews — often from the Herald Sun, which tries to cover as many of the several hundred shows as possible. Often they have quite legitimate complaints.

There is a trend amongst less experienced critics for comedy reviews to become entirely about personal taste. Personal taste plays a massive role in criticism, particularly in comedy, which is one of the most subjective art forms. But it has to be balanced with strong analytical skills and some sense of context.

When it comes to comedy reviews, I tend to think it’s better to use writers who have at least some experience in reviewing any art form, because they generally understand the role their own taste should play. I put myself in this basket — I’m not an experienced comedy reviewer by any stretch of the imagination, but I think my skills in theatre and TV criticism are relatively transferable.

It’s true that comedians have been particularly poorly served by critics in Australia — there are only a handful of experienced comedy critics; certainly not enough to review all of the shows at a major festival.

And I can understand why comedians occasionally lose it over negative reviews from writers who decide they might as well give comedy criticism a go (particularly when it happens in a major professional publication). These are comedians who devote their lives to their craft, and to be reviewed by somebody who might be a professional writer but just a casual fan of comedy could be very difficult.

All reviewing is kind of unfair in this regard — an artist will spend weeks, months or years crafting a particular work and then a critic will spend a few just a few short hours with that work before delivering their personal verdict. And comedians, who rely on just their own charm and wits, must have it harder than most.