Why's the Oz hawking Dr Seuss books? And other media tidbits of the day.

Synergistic promotion. Wonder why your friendly local News Corp Australia tabloid is offering Dr Seuss books with every copy? It’s just the type of offer to get you to part with a buck or two extra for your kids or grand kids, and from what Crikey can see the books are selling out. Luckily for News Corp, Dr Seuss is published by HarperCollins, which is also owned by News Corp. So no doubt News Corp Australia got a good price on all those books it is now selling cheaply to encourage the purchase of more copies of the struggling tabloids in the empire.

The latest circulation audit figures show that Rupert’s tabloids didn’t have a good year last year with sales sliding all over the place. For example, sales of the Monday to Friday editions of the Daily Tele in Sydney fell 6.5% last year, while the Courier-Mail in Brisbane slipped 5.6%. In Adelaide, the Advertiser lost 7%, in Melbourne, the Herald Sun shed 6.7% and the Mercury in Hobart lost 4.6%. The NT News seemed to have it figured out though — up 0.4%. — Glenn Dyer

The incredible, shrinking Bauer. NewsLifeMedia, the magazine arm of News Corp Australia, has emerged from December quarterly and half-year circulation audits as the best performed of the country’s major publishers, which also include Pacific Magazines, a division of Seven West Media, and Bauer, the German group that has managed to turn a large magazine business in the shape of ACP, into a smaller one in the three and a half years since they bought it from Nine Entertainment for around half a billion dollars.

There were no stunning surges in sales for NewsLife titles in 2015, magazines like Vogue, Vogue Living, Harpers, Country Living and Donna Hay enjoyed mostly modest increases. In fact Inside Out, a monthly, was one of the best performed magazines in 2015, enjoying a 9.6% jump in sales for NewsLife. The best performer was the Pacific Magazines title, Prevention, a bi-monthly, which enjoyed a 26% surge in sales to 56,016 copies.

Pacific and Bauer both reported rotten results for their biggest titles — we know Bauer has just killed off Cleo, but Dolly (sales down nearly 31%, year on year), and Cosmopolitan (sales down more than 21%) must be candidates to follow Cleo into the knackery. Bauer’s biggest selling weekly title, Woman’s Day had its sales slide by near 13% over 2015 to 275,120 copies a week in the fourth quarter.

Pacific’s biggest selling title, New Idea, shrank by 11.1% to 241,030 copies in the fourth quarter. That’s Life lost 10.8% of 2014’s sales last year as well. Better Homes and Gardens, which benefits from the weekly TV show on Seven, experienced an 8% slide in sales last year for Pacific to 330,017 copies a month. Bauer’s big title is the Australian Women’s Weekly, which lost its editor in chief, Helen McCabe, in January after six years in the job. Its sales slipped 7.3% in 2015 to 400,810 copies in the December quarter.

Among the independents, Frankie — a hipster homemaker type of magazine — and a big hit several years ago, continues to lose sales in 2015, reporting a 13.6% slide to a still solid 53,053 copies every fortnight. — Glenn Dyer

End in sight for media reform marathon? In the AFR, Laura Tingle reports:

“Communications Minister Mitch Fifield is close to achieving a breakthrough with the Nationals on local content in regional television that relies on a ‘points system’ to guarantee production of authentic local stories, paving the way for long delayed changes to media ownership rules.”

Front page of the day. Vogue UK has Adele photographed by Annie Leibovitz … 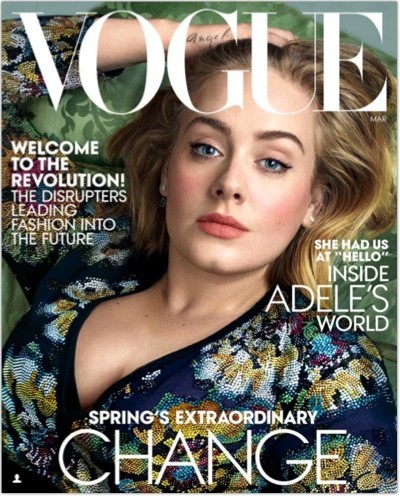