Voters are unhappy with the government's proposal to privatise government payments, but they're split on whether to send asylum seekers' children back to detention, this week's Essential Report shows.

The government’s plan to privatise the payments system for Medicare, pharmaceutical benefits and transfer payments looks headed for electoral trouble, with massive opposition in the electorate, this week’s Essential Report reveals.

More than 60% of voters disapprove, including nearly 40% who strongly disapprove, of government plans to test the market for private providers of payment services to replace current, often outmoded, government payment systems. Labor has sought to discredit the proposal as “privatising Medicare”, despite the proposal being unrelated to the provision of health services; the numbers suggest the ALP might be able to exploit voter confusion to demonise the proposal. 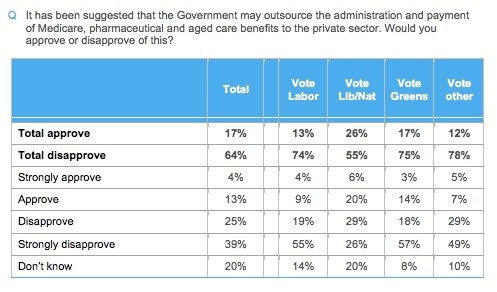 Worse, while there’s some difference between voters, more than half of Coalition voters disapprove of the proposal as well, including more than a quarter who strongly disapprove. At the very least, the government will have a significant challenge in trying to convince voters of its case for privatisation.

Meanwhile, use of illicit drugs remains far and away the health problem of greatest concern to voters, with 44% saying they were very concerned about it, while food safety was the next most often-cited cause for great concern, at 26%; high-profile recent international health events like the Zika virus or Ebola have relatively little impact.

It is also illicit drugs that is most frequently identified as the area where governments “should do more” (68%), while 57% nominate obesity and 50% food safety.

On voting intention, the Coalition is steady on 43% but Labor had dropped two points to 33%. With the Greens remaining solid on 11%, that leaves a two-party preferred result of 52%-48%, a better outcome for the Coalition than last week’s 51/49 split. And 28% of voters say the performance of the Turnbull government has been “better than expected” compared to 22% who say “worse than expected”; 41% say it was about what they expected.

The coalition should resurrect Labor’s “Malaysian solution” i.e. send refugees to Malaysia under an agreement whereby the Malaysian government will not send genuine refugees back to their country of origin but let tham settle permanently in Malaysia in exchange for Australia taking twice as many UNHCR verified refugees from Malasia. It could also also accept New Zealand’s offer, at least in part.
This would end the insufferable limbo that refugees have been left in by Coalition policy, which apparently values deterrence more than children’s safety and the lives of refugees, whose only mistake was to easy their money on boat trips organised by people smugglers.

I agree that it seemed better than anything else both parties have thought of, but I think that it can’t be resurrected because it got shot down by the High Court or some such.

Who can forget Joe Hockey choking back the tears as he contemplated the idea of refugee children being forced to live in Malaysia?

WoopWoo – only when Leventy was in opposition did he declare “over my dead body”. Once in office he had a miraculous a 2nd existence.

1. Medicare etc: why doesn’t the Government spend the money to upgrade its own systems? Then it can also monitor claims and expenditure etc as it needs to do ie retain control of the systems and the policy implementation and therefore retain policy knowledge rather than outsourcing it. Also private will probably = worse if other privatisations are anything to go by.

2. Refugees on Manus and Nauru: doesn’t matter in one way what the conditions are like, keeping people detained for lengthy periods of time is not good for their health and doesn’t solve the problem of what to do with them.

Keeping people locked up is not a deterrent to people getting on boats. Also regional solutions are unrealistic (except NZ) as most countries in the region are poorer and many such as Malaysia and Thailand also host many thousands of refugees already. They should all be brought to Australia