The "daft women on breakfast TV". And other media tidbits of the day.

AFP rejects claims it is spying on journos. Last week, in response to Guardian Australia journalist Paul Farrell’s report detailing over 200 pages of AFP files related to tracking down sources of his for a single story on border protection policy, the journalists’ union, the Media, Entertainment & Arts Alliance said the AFP would “trawl the metadata of journalists”. CEO Paul Murphy said this was what the union had been told by the government and AFP during meetings around the mandatory data retention legislation almost a year ago.

The AFP has hit back, however, stating on Saturday that the MEAA’s claim was “not accurate”, and that since the legislation came into effect in October last year, the AFP had not accessed or applied to access the metadata belonging to any journalist. The comments, the AFP said, were that in the 18 months to March 2015, the AFP had received 13 referrals for investigating leaks, but in the “overwhelming majority” of these investigations, there was no need to access journalists’ metadata and accessing a journalist’s metadata was “rare”.

The language used is very precise, and interestingly, the AFP does not confirm or deny that it has received referrals for investigation since October, just that it hasn’t applied for access, or accessed any journalist’s metadata since October.

The telling part of the statement is that the AFP says that because a journalist is not a Commonwealth officer who could be in breach of the Crimes Act for leaking confidential information, they are not the subject of the leak investigations. This means that the AFP could still be pursuing leaks handed out to journalists, but rather than trying to get at the journalist’s own metadata, the AFP can simply look into the metadata of public servants in the area of the leak, and then see which one of those contacted the journalists — assuming that they didn’t take adequate precautions to protect themselves. — Josh Taylor

Click matrixes. A 2013 Bain & Co consultants report measured senior Fairfax journalists, specifically five-time Walkley winner Kate McClymont, according to how many views per article she gets, The Australian reports.

Those daft women on commercial breakfast TV. The ABC’s Virginia Haussegger has slammed a corny and awkward Sunrise sketch that had Sex and the City star Kristin Davis take part in an awkward and corny skit, rather than speak about sexual violence experienced by refugees — the reason she was in Australia.

The unappreciated segment, which took place last Thursday, forced Sunrise host Sam Armytage to pull out of an event with Davis she was scheduled to MC over the weekend. Writing for The Sydney Morning Herald, Haussegger asks “what the hell is wrong with those daft women on commercial breakfast TV”:

“Why are they winding up the ditzy dial? And why are they so dead keen to present themselves as mindless bimbos?

“As a woman who has spent 25 years on television, believe me, I ask these questions with great reluctance. And frustration …

“And the sanctimonious nonsense that followed was utterly shameful – with Daddy Bear Kochie sitting in the middle of the couch, flanked by his po-faced girls, pulling their best “we’ve been hurt and it wasn’t our fault” expressions. Oh please!”

The fiery op-ed has itself been criticised by some of the Sunrise cast. Sunrise presenter Edwina Bartholomew wasn’t impressed …

And showbiz reporter and Sunrise regular Peter Ford tweeted that the “realities of commercial TV are different to your cloistered world. [R]efugee stories =ratings poison, lucky to get few minutes,” he wrote. In Haussegger’s defence, while she has presented the ABC Canberra bulletin for 15 years, she’s also worked for Channels Seven and Nine in senior reporting roles.  — Myriam Robin

Economics writer had the story yonks ago, says Gittins. Plans to drop an increase to the GST were written about in the Fairfax papers in November by Age economics editor Peter Martin, but no one paid attention because it wasn’t a ministerial drop, writes Ross Gittins:

“What was arguably the biggest political scoop of the year was ignored. Maybe the denizens of the House with the Flag on Top didn’t believe it. What’s an economics editor doing getting scoops? Why would you bury a scoop in a column? Why was he told when we weren’t?

“Or maybe it suited no one in the building to kill off the GST story so soon. Politics is like a drama, where each player sticks to his part. Labor didn’t want to know there’d​ be no change to the GST because it wanted to keep running its scare campaign. Similarly, the press gallery wanted to keep milking the story for scary headlines …”

Guardian could lose 200 journos. On Friday we saw not only confirmation The Independent and its Sunday edition would close late next month, but news on the progress of The Guardian towards cost cuts that could top $100 million. The decisions to close the two Independent titles and sell its i paper to Johnston Press had been signalled the day before when news broke of the plans to sell i. Some of the journalists from the two titles will be redeployed to i, 24 others to the websites of the two Independents, which will be expanded, but the rump of around 100 people face the loss of their jobs. The Independent will close on March 26, the Sunday paper on March 20.

But rival London papers printed a human resources memo to staff on Friday from The Guardian, which warned of possible redundancies. Plans for the 20% cost cut were revealed in late January when it became known that The Guardian will lose to $100 million in the year to March as it chews through the cash pile the parent company has created from selling other assets. Total losses in calendar 2015 were put at 100 million pounds — leaving the parent with 735 million pounds, which would be exhausted in seven years time if costs were not cut.

UK media reports say The Guardian had 968 core editorial staff last year (that includes the websites and their offices in Australia and the US, which were said to be exempt from the cost-cutting round). But a cut of 20% would mean close to 200 journalists’ jobs would go, but a spokesman for The Guardian made it clear that the 20% cut applies to all costs, not just journalists. That’s despite an HR memo pointing out that staff costs “are our biggest overhead”. — Glenn Dyer

Front page of the day. The Guardian’s Observer magazine allowed a reader to propose using its front cover on Valentine’s Day yesterday. For what it’s worth, she said “yes” … 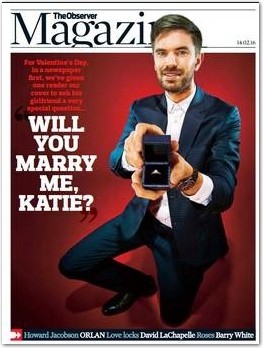 It was good of you to concede that [unlike what happens with the Crikey Land Commissariat] “The language used is very precise, (and) it hasn’t applied for access, or accessed any journalist’s metadata since October.”
You’re now in the position of someone who had no luck with the question “have you stopped beating your wife” and decides to point out his opponent hasn’t said whether he’ll stop beating his wife in the future.
That’s vintage Crikey at its inane best, isn’t it.

Crikey has missed the point of the AFP denial that wasn’t a denial – the previous enquiries did not need to use metadata as the old phone connection records are perfectly adequate to chase down all & sundry.
The more important point is missed – WTF will happen when they DO have metadata to play with.