Just after 4pm on St Valentine’s Day, 2016, Willem Westra van Holthe resigned as deputy chief minister of the Northern Territory and from all of his ministerial portfolios. 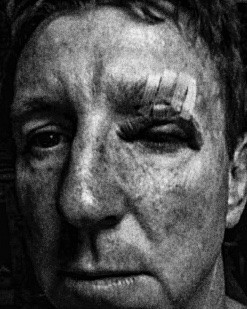 Van Holthe’s most recent troubles — the photo above was taken after a stoush at a Katherine club in October 2010 — have been an open secret for the past few months, with the NT News sitting on a batch of documents leaked to the media by van Holthe’s estranged wife following her Facebook revelations in early November 2015. Just over one year ago, van Holthe and fellow plotter NT Attorney-General Johannes “John” Elferink — both are of Dutch heritage and both are former NT coppers — staged a flawed midnight coup attempt on Chief Minister Adam Giles’ leadership of the Country Liberal Party.

That ended in tears for some, but as I reported at the time (see here and here) van Holthewas bizarrely rewarded with the deputy chief ministership and a swathe of (relatively) minor portfolios while his coup co-plotter Elferink retained the A-G’s gig.

As Sunday Territorian columnist Maria Billias wrote in November last year, van Holthe’s wife went “on a mass Facebook tirade labelling him a ‘bastard’ and his new girlfriend a ‘tramp'”. Billias said that van Holthe’s camp had sought the sympathy of Territorians by a frank admission that he had indeed “cheated on his wife of 27 years” but noted that van Holthe was concerned about the effects the revelations could have on his political career.

But van Holthe and electors in his home electorate of Katherine didn’t have to wait long. The Murdoch-owned NT News took its time in getting the story to press, but it was scooped by a front-page splash last Wednesday in the Fairfax-owned Katherine Times, where editor, Lyndon Keane, reported that van Holthe was furious at allegations arising from emails — leaked by his estranged wife — that “demonstrate a personal business relationship between the Member for Katherine and CT Group president Tran Kim Chung”.

CT Group had in 2014 signed off on a project facilitation agreement with the NT government on a $140 million project to grow 10,000 hectares of dragon fruit — a bland but colourful fruit popular during Chinese New Year.

The NT News followed up with further details of the relationship between van Holthe and the CT Group in a series of strong pieces by Christopher Walsh (see here and here). By Thursday van Holthe’s political future was on the line following ex-CLP member Robyn Lambley tabling one of the leaked emails in the NT Legislative Assembly that showed van Holthe’s current partner was employed by the CT Group during his “private trips” to Vietnam, where the CT Group is based.

Christopher Walsh reported that van Holthe, during a personal explanation to the Legislative Assembly on Wednesday:

“… admitted that pursuing private investment in the company for a mega mall project in Ho Chi Minh City was a ‘mistake’ but said since he didn’t go through with it, no conflict of interest existed. He denied ever accepting anything more than a 10-minute ride to the airport from the company and said all hospitality on his private trips was provided by his new partner, Theresa Phan. ‘Due to the nature of those trips, I have of course accepted, and gratefully so, the warm hospitality of my partner in her home country,’ he said. ‘That’s where any hospitality starts and stops.'”

On Friday, opposition leader Michael Gunner made a formal complaint to NT Police Commissioner Reece Kershaw about van Holthe’s conduct as a minister, stating that:

“Recent information obtained and published by the NT News, in conjunction with admissions made by the Minister himself, compel a conclusion that he has abused his power as a holder of public office, and, in addition, has misused taxpayer funds. This conduct is prohibited by certain provisions of the Criminal Code Act of the Northern Territory.”

Kershaw replied that afternoon, advising Gunner that “the matter has been referred to the Northern Territory Police Special References Unit for further consideration”.

Later that day ABC Darwin reported that senior Country Liberal Party figures were calling for van Holthe to resign. Willem was holding his ground and denying any conflict of interest “… because he never went through with the investment and … his relationships never compromised territory interests”.

“Government ministers this week publicly defended the Deputy Chief Minister, telling parliament the actions did not constitute a breach of the law or Ministerial Code. ‘There is no smoking gun, there is nothing that the deputy chief minister needs to answer here,’ Treasurer Dave Tollner said on Thursday.”

On other days van Holthe may have been able to tough it out — as locals are wont to note, things are very different up here — but his cause wasn’t helped by the furore surrounding federal Liberal MP Stuart Robert, in very similar circumstances to those facing van Holthe.

All this has left NT Chief Minister Adam Giles, already hamstrung running a minority government, with some very difficult decisions, not only as to who will be his new deputy — both Peter Styles and Peter Chandler must be high on that list — but also with a wider portfolio reshuffle.

For mine, Styles will get the gig as deputy, because although Chandler has served as deputy before, Styles — with his wife, Linda Fazldeen — is a key Giles supporter and number-cruncher. Styles holds the Darwin suburban seat of Sanderson by a slim margin and may want to stay out of the spotlight that inevitably shines upon the incumbent deputy leader and concentrate instead on the difficult election campaign ahead.

As for filling van Holthe’s four ministerial portfolios, look to newcomers Nathan Barrett and Lia Finocchiaro to both get guernsey, but they’ll be minor portfolios and Giles will have to undertake a much wider — and troublesome, in an election year — re-shuffle. Big losers in that process might be Attorney-General John Elferink — who will not stand at the election in August this year –and Treasurer Dave Tollner, who was overlooked for preselection in favour of Finocchiaro.

More pitfalls lie ahead for van Holthe and the CLP if the NT Police investigation proceeds, though it is unclear at this point what will emerge upon their “further consideration” of this matter. One thing that is clear is that van Holthe’s ministerial career is finished. The Northern Myth is already hearing mutterings from CLP members in Katherine that van Holthe’s candidacy for the August 2016 election may be reconsidered.