Abbott’s sleepover. Former prime minister Tony Abbott has updated his interest register to include the flights and hospitality paid for by the conservative American lobby group Alliance Defending Freedom. According to Abbott, the organisation paid for flights between Australia and the US for himself and his wife, Margie, and upgraded his hotel room in Washington. Abbott also received accommodation “at the Consul-General’s private residence in New York City”. That means that while Abbott was in town to speak about why marriage should stay as it is, he also dropped in on former Liberal powerbroker Nick Minchin, who has been Australia’s Consul-General in New York since 2014. And yes, that’s the same Nick Minchin Abbott put in after dumping former Labor premier Steve Bracks from that position before Bracks had even got on a plane. Just as well, a sleepover at Bracks’ could have been awkward for Abbott.

Joycean maths. With the ascension of Barnaby Joyce to the deputy prime ministership, at least some journalists haven’t forgotten just how remarkable Joyce’s ignorance of basic economics and fiscal policy is. The Australian Financial Review’s Tony Walker raised then-shadow finance minister Joyce’s ridiculous and hysterical claims in February 2010 that Australia was in imminent danger of defaulting. Absurdly, Joyce told Walker he now felt vindicated, claiming “Recently, I heard Glenn Stevens say exactly what I said. And I thought, ‘Well, do you ever in your quiet moments think, “that prick [Joyce] actually told us about this some years ago, and now I’m saying exactly what he’s saying”.’ But anyway such is life.” To use a favourite phrase of Joyce’s persistent Coalition critic Bill Heffernan: bullshit. RBA governor Glenn Stevens has said nothing of the sort, let alone exactly what Joyce said. And let’s check the facts. When Joyce made his claim that Australia was about to default, net debt was just under $22 billion. When Labor left office, it was just over $150 billion. According to a recent media release by Finance Minister Mathias Cormann, net debt is now $274 billion, while MYEFO projects net debt to reach nearly $350 billion in coming years. So net debt is now more than 10 times bigger than when Joyce claimed we were about to default, and Australia retains its triple triple-A credit rating that it earned under treasurer Wayne Swan. And it’s projected under the Coalition to expand to 16 times 2010 levels. Funny kind of “vindication” for Joyce.

Use-by date for Masters? Supermarket giant Woolworths is yet to announce just what fate lies in store for Masters, its failed chain of hardware stores. A tipster in the industry tells us that the stores have been set a deadline — sale or closure by June 16, to contain the company’s losses to one financial year. Woolies got back to us denying the deadline and emphasising that they were hopeful of selling the Masters business. We’ll check back in six months to see how that hope has gone.

CSIRO in Silicon Valley. It’s been a rocky few weeks for the CSIRO, with 350 jobs moved away from tracking climate science to other parts of the organisation. The move has been roundly condemned by climate change scientists and activists as well as the World Meteorological Organisation. It was revealed this week that other agencies like the Bureau of Meteorology were only given 24 hours’ notice of the announcement of the changes. It’s not a great time for CEO Larry Marshall to be spruiking the CSIRO’s wares in Silicon Valley, where the Silicon Valley and Down Under: Innovation Summit is due to take place next week. As has been widely noted, Marshall came to the CSIRO from the tech hub in California, where he managed a venture capital firm. The website for the summit, part of the Australian-US Business Week, says the government science agency will be there “to explore opportunities to collaborate and create ongoing value with leading corporates and senior executives”. The newly business-minded CSIRO is advertised as being able to “help companies leverage technology to reduce time to market … help investors find new opportunities to invest for long term value”, and “solve larger problems in the areas of water, agriculture, and healthcare”. Interestingly, while resources, water, agriculture and renewables are all mentioned as topics to be discussed, climate change is not one of them.

And now a word from Lambie. Maverick Senator Jacqui Lambie has announced that she will be speaking to the media about the secret volumes of the trade union royal commission report at lunchtime today in Melbourne. Lambie tweeted that Victorian Jacqui Lambie Network candidate for the Senate, Hugh Dolan, would also be there. Lambie’s access to the report has been somewhat controversial. It was reported last week that Prime Minister Malcolm Turnbull read the confidentiality statement from the volume to Lambie, and it was revealed in estimates this week that Minister for Employment Michaelia Cash emphasised to Lambie the consequences for revealing what is in the documents. Shadow attorney-general Mark Dreyfus also read the documents, but was given no special warning. Attorney-General George Brandis told the committee he thought it unnecessary to mention the importance of confidentiality to fellow QC Dreyfus and wasn’t sure why Cash mentioned the $2000 fine and possible jail term to Lambie. When it was suggested that it could have been an effort to intimidate the Tasmanian Senator, he hit back with this defence of Cash:

“Senator Lambie, I am sure Senator Cash is a very nice person and would be the last person in the world to want to intimidate anyone. I did not draft the letter that Senator Cash wrote. I do not know why she put that provision in the letter. It seems quite innocuous to me as a matter of fact.”

Babes of Bondi. Asylum seeker activists took to Bondi Beach this morning, placing cribs for the 37 babies due to be sent back to Nauru on the shore: 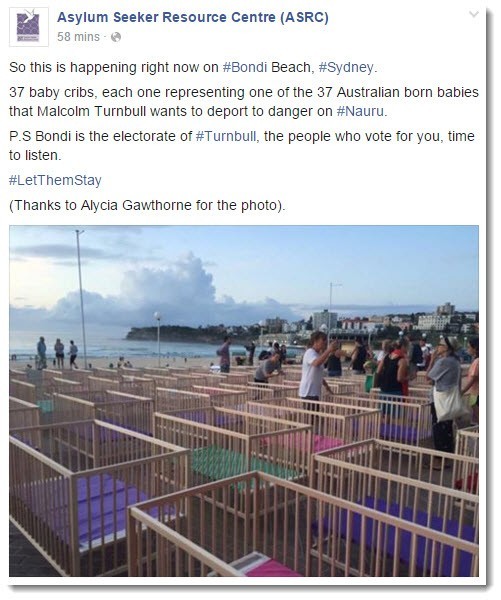 I think Lambie is essentially a decent and responsible person. The cross bencher that scares the hell out of me is Lazarus – all piss and wind, nothing intelligent to add. And his limited vocabulary is cringeworthy. Too many knocked I reckon ….

I pray that Lambie does blow the whole scam wide open and then dare the government to charge her.
Sanger – I’m far more worried about the hacks & apparatchiks from the “majors” without any inclination to independent thought.
I have been very happy with the other Indies growing into the Senatorial roles and look forward to many more.
Vote Indie, Green or NXT.

Someone should tell those activists that these sort of stunts change approximately no-one’s mind about the issues and are worse than useless.

My God, or yours, regional Australia is poorly served. Once in his life, Barnaby Joyce had the chance to truly serve his constituency by opposing VSU as it would damage the regional universities. My daughter was at one at the time (his old one). Of course Barnaby backed down. Backdown Barnaby always backs down. He will nevr stand up against coal mines. Hell’s teeth Mark Vaile chairs Whitehaven (more farms blighted). The Nationals stand for coal and CSG. The we have the even more hopeless Fiona Nash, who puts a junk food lobbyist in charge of food labelling. I live in the electorate of Parkes and am represented by two vacuous, blond grinning NP boofheads. One is unfortunately, the deputy premier of NSW. Nowhere deserves this.

Jethro and his bottom lines – he’s like a blow-fly.