Media briefs: Every move you make … choose your own adventure … Last days for the Independent …

What happens when you report on on-water matters. Plus other media tidbits of the day.

Every move you make. Eighteen months ago, The Guardian’s Paul Farrell wrote a story showing how Australia’s refugee patrol vessels had gone deep into Indonesian waters, which seems to have ruffled quite a few feathers at the Australian Federal Police. He requested police documents relating to that story and himself, and what he got back, he wrote this morning, was 200 pages of heavily redacted files, showing how far the Australian Federal Police go to investigate those who they believe may have given a journalist unauthorised information:

“The files are made up of operational centre meeting minutes, file notes, interview records and a plan for an investigation the AFP undertook into one of my stories. Most concerning is what appears to be a list of suspects the AFP drew up, along with possible offences they believe they may have committed.

“The documents show that during the course of an investigation into my sources for a story I had written, an AFP officer logged more than 800 electronic updates on the investigation file.

“It’s a mosaic in document form of state surveillance of journalists by police. The files give an insight into the fragile state of journalism in Australia and the ease with which the police choose to take up these investigations because of poorly defined laws.”

Choose your own adventure. The same NSW parliamentary committee hearing in Sydney yesterday and the same all-party MPs, but reporters from different newspapers. The result? Read for yourself (top is The Australian, bottom is The Sydney Morning Herald): 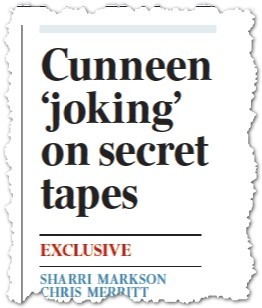 Crocs sell. Three cheers for the NT News, which in this morning’s newspaper circulations survey was the sole paper to raise its print figures (up 0.4%).

The NT News sold an average of 58 more copies this quarter more than it did a year ago. When you count discounted sales, that figure is dwarfed by the 600 or so extra copies the NT News gave out this year to hotels, or the extra 100 to airlines. Still, we have to find good news where we can.

The worst result? The Canberra Times lost a whopping 18.7% of its print circulation — down to 18,837 copies.

The Weekend Financial Review’s figures were down 8% year-on-year, which is only slightly worse than the average. We mention them though because for two surveys now the Weekend Fin appeared impervious to the circulation declines gripping the industry — it even posted a 1% circulation rise two surveys back. Seems all good runs must come to an end.

The Australian is only down 2.6% in print circulation, and only 1.2% for its weekend edition, which is the second-best result after the NT News. The Oz sits just above the 100,000 mark with an average of 102,068 copies. — Myriam Robin

Last days for The Independent. The slide in newspaper revenues and profits in the UK newspaper market is about to see its first casualties — the sale of metro paper, “i”, and then closure of its weak stablemates The Independent and The Independent On Sunday. UK media reports say Russian oligarch Evgeny Lebedev is in the throes of a decision on whether to sell the “i” and then close the two other titles. Lebedev would keep a fourth title, the Evening Standard, which he partly owns (its other owners are the publishers of the Daily Mail and local London TV station London Live).

The decision could convince other publishers, such as News UK, The Guardian and The Telegraph, to follow with big job cuts of their own. The Guardian is certainly well on the way with reports cuts of 20% are to be revealed in the next few weeks. The reported buyer of “i” is local and regional newspaper owner Johnston Press, with the purchase price put at around 24 million pounds (or just over A$50 million).

The “i” paper was founded in 2010, and relies on The Independent for the majority of its content. It costs 40p, compared with the 1.60 pounds price of its sister title. According to audit bureau of circulation figures, the i recorded an average circulation of 268,431 in December of last year. The Independent had 56,074 in sales and The Independent on Sunday, 92,914. — Glenn Dyer

MySpace — it’s gonna be huge! MySpace, the once-pioneering online social media website run into the ground and ruined by the Murdoch clan at News Corp, has a new owner: Time Inc, America’s biggest magazine group, which overnight revealed it had bought the current owner of the website, Viant, for $100 million. The Murdochs and their managers blew the best part of half a billion dollars in their MySpace adventure and they sold it in 2011 to Viant for US$35 million. But investors have not been very impressed with Time Inc’s move; they’ve given news of the deal, plus Time’s fourth-quarter and full-year results the thumbs down. The shares fell 9% in the big sell-off overnight, taking the loss in the past year to more than 52%.

As sales of its well known magazines continue to fall (Time, Sports Illustrated, People, etc), Time management have driven the company deeper into digital ads. The latest purchase fits that new approach to a T. It has paid an undisclosed amount for Viant Technology, which is a data-driven marketing group. Viant operates several digital ad technology and media companies including Vindico and Myspace. The move to expand its digital operations is needed with Time’s print sales continuing to fall. — Glenn Dyer

Video of the day. Funny or Die has made a 50-minute comedy on Donald Trump’s life starring Johnny Depp. But the New Yorker wonders whether Trump is “impervious to comedy” … 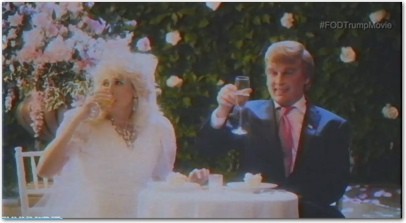 Thank Heavens the media don’t automatically receive the sorts of taxpayer largess routinely squandered on the metaphorical babies of the chattering classes.

Say something intelligent Norman. Just for me. One thing the Cunneen headlines make clear is that the ICAC was absolutely correct to investigate. It is also clear that the senior prosecutor has doubtful taste in friends. Surely, if you take the perfectly reasonable view that she was not joking, the the senior prosecutor appeared to be attempting to pervert the course of justice. How could this NOT be corrupt conduct? Whether this is true or not is irrelevant. That is what should be have been determined. Sounds like judges protecting one of their own to me.