Ruminations on an SBS/ABC merger. We haven’t heard the last of merging SBS and the ABC. In two weeks, Mark Scott will front the National Press Club in what will probably be his final big speech before he steps down in May. The topic is likely to come up.

One issue that complicates any discussion of a merger is what to do about SBS’ ads. When he spoke to the Press Club on the topic in 2014, former SBS chairman Joe Skrzynski said the commercial networks would throw a fit if the ABC took over SBS’ advertising. Still, there is another option, which is the ABC taking over SBS and turning it ad-free. Veteran media journalist Meg Simons says that most would admit advertising on SBS was “a mistake”. A merger — or, indeed, an ABC-led takeover — that would make SBS ad-free could be a chance to turn the clock back on that. An ad-free SBS could be welcomed by all sorts of people, from the commercial networks who don’t like the competition for revenue to the journalists who are uncomfortable with SBS’ commercial direction and the subsequent focus on ratings to community groups who fear it dilutes the broadcaster’s commitment to its charter. Of course, no ads on SBS could eat up many of the financial benefits of a merger, at least in the short term.

Now that SBS is down a chairman, the government has the opportunity to nudge the possibility of a merger one way or another. A chairman open to more integration with the ABC could kick the process off.

And some have suggested using SBS for another purpose altogether. Save our SBS’ Steve Aujard says SBS’ foreign language programming is very popular in parts of Asia. The ABC has a charter obligation to be an international broadcaster, but given it’s already broadcasting in international languages, Aujard reckons SBS might be able to do the job as well if not better.

Just in time. Canberra was abuzz yesterday with the news that embattled social services minister Stuart Robert, former prime minister Tony Abbott and Ian Macfarlane were all given $40,000 Rolexes by Chinese businessman Li Ruipeng while in opposition, but thinking it was fake, Macfarlane declared his a $300-$500 gift and went on his merry way.

“Obvious tell-tale signs — without opening a watch up — are clumsy lettering, slightly misshapen hands or numerals, mis-matched bezels and sometimes a battery-driven quartz movement where there should be a self-winding mechanical one.”

Liberal MP Ian Goodenough was keen for the public to know that his Rolex wasn’t a fake, sending out this missive, detailing his life story from days at Aranmore Catholic College to one day owning a Rolex: 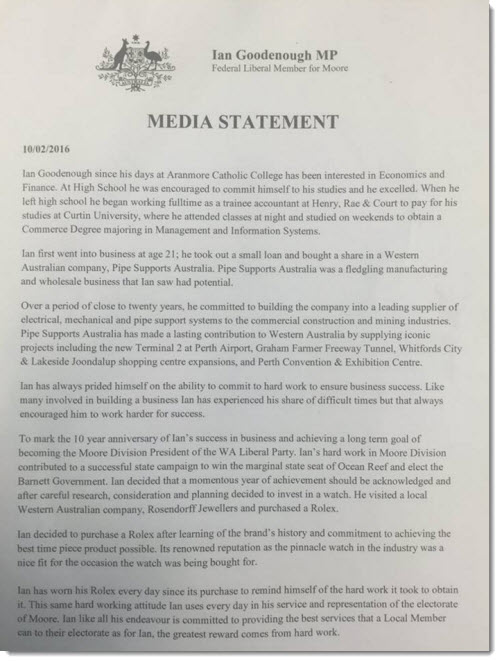 “Ian decided to purchase a Rolex after learning of the brand’s history and commitment to achieving the best time piece product possible. Its renowned reputation as the pinnacle watch in the industry was a nice fit for the occasion the watch was being bought for.”

So not from a foreign billionaire, and not a fake, Goodenough’s watch is a sign of his hard work and endeavour. Labor MP Alannah McTiernan decided this was the chance to explain her life of (possible) luxury, detailing the gift of a fancy handbag that marked her election to Parliament. 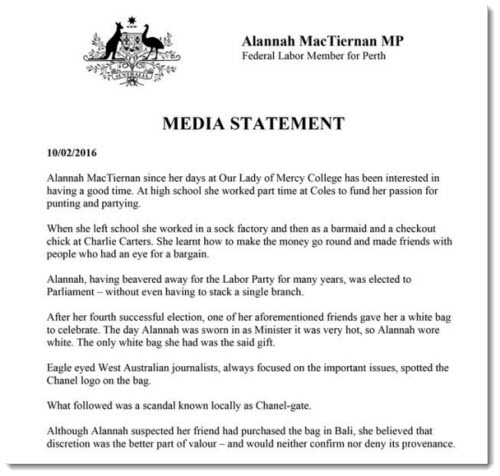 Lessons in why you shouldn’t embarrass the world’s most powerful country. Further evidence this morning of the government’s studied indifference to Australian citizen Julian Assange’s arbitrary detention. Up before Senate estimates, the Department of Foreign Affairs and Trade was asked by Greens Senator Scott Ludlam if the department had made any representations to Sweden about the fact that Swedish prosecutors have, for several years, employed every excuse short of “the dog ate my prosecution brief” to avoid questioning Assange. “We’ve made several representations to Sweden about ensuring due process for Mr Assange,” a DFAT officer answered. “Although the last one was in December 2011.” So for over four years, in spite of the Swedes refusing to follow normal procedure and interview Assange in the UK and in the Ecuadorean embassy, DFAT has raised no concerns about the “investigation”. Peculiar behaviour for the Department that under Bob Carr moved heaven and earth to get lawyer Melinda Taylor (now a legal adviser to Assange) freed from Libya.

New Nats leader. With Warren Truss (finally) announcing his retirement, Barnaby Joyce and other Nationals, including Victorian Darren Chester, are putting their Akubras in the ring to take on the role of deputy prime minister. Member for Mallee Andrew Broad ruled himself out this morning, saying: “I got a shocking haircut, so no one is going to vote for me while I’ve got this bad haircut.” 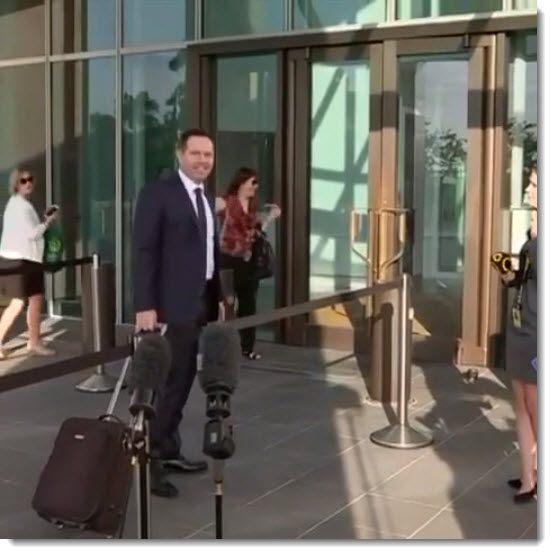 “I was fortunate in the extreme to be offered this role by Helen Coonan, and that it was so stylishly reaffirmed by Senator Stephen Conroy. Like my father, his father, and his father before him — Sir Austin Chapman, the real father of Canberra — I have had the opportunity to make a small, but hopefully useful, contribution in our national interest. It has been an unqualified privilege, Chairman, and I exhort anyone who has not been on the inside of the public service to find an opportunity to do so. Public servants are wonderful, caring, intelligent and committed Australians who are occasionally, so sadly and so pathetically stigmatised as grey cardigan wearers who — to paraphrase Theodore Roosevelt from his famous Citizen in a Republic speech — actually strive to do the deeds, who know great enthusiasms, the great devotions, who spend themselves in a worthy cause.”

Grey cardigans indeed — after this brutal decade of redundancies and outsourcing the only people in the APS in grey cardigans are the hipsters working for the IT and marketing firms we’ve outsourced all our functions to.

I still cannot get my nut around the fact the tory giftees were just dunky-hory thinking they were being given fake Rollex – call out the metadata copyright police..
If they truly had believed that they should be grossly insulted, if not then it is simple concupiscence rampant.
Choose, coz both stink.