Don't worry, the ABC says, former ANZ CEO Mike Smith is not reviewing our business coverage. And other media tidbits of the day.

What it’s like to freeze live on national television. On Monday, international politics academic Dr Benjamin Habib bombed, badly, on ABC News 24, where he’d been called on to talk about North Korea’s nuclear ambitions. He was unable to get more than two or three words into any of his questions before falling into a frightened silence. After two or three attempts, he said, “I’m losing it here”, and the interview was terminated.

If you’ve wondered what was going on inside his head, he’s written a detailed article on the experience on his blog.

“I am reflecting here on the worst public embarrassment of my career. Two days ago I appeared live on television on ABC News Breakfast … The interview was a disaster from the get-go as I melted down under the weight of anxiety. The experience was mortifying, the feeling afterward devastating and the humiliation very very public.”

Habib writes he suffered with severe anxiety, which rose steadily in the hours leading up to the interview.

“Michael Rowland introduced me and then threw to me with his first question. I have no memory of his actual question, my mind all of the sudden swimming in a haze. As I realised that seconds were ticking away without me forming a coherent answer, the physical anxiety reactions intensified. I babbled and stumbled, my carefully prepared comments slipping away from my conscious awareness. Michael and Virginia, seeing that I was struggling, asked prompting questions in an effort to change tack and help me out of the hole. I very much appreciated their efforts to shepherd me through the interview, but it was to no avail …

“I was in complete shock. I have never before experienced such an intense anxiety reaction, even as someone with a long history with social anxieties. I was grateful at this point to Virginia, grabbed my arm as soon as the live feed cut and said “don’t worry, it’s OK.” I was then led out of the studio room by one of the tech guys, who was also kind and supportive, as were the staff in the editing room. I was then led back out into the lobby and offered a coffee in the cafeteria, but I felt so terrible that I fled the building directly.”

Habib says he’s speaking out about his experiences to prompt discussion about mental health problems.

“After some reflection over the past couple of days, I’ve come to see feel a responsibility as someone with a position of influence, who has experienced extreme anxiety and associated period bouts of depression, to share my experiences and attempt to normalise mental health as an issue for the young people I work with … If I can help someone with anxiety feel better about themselves then my shitty experience on national television will have been worth it.”

Smith only sort of involved in review. Former ANZ boss Mike Smith is to review the ABC’s business coverage in its eight independent editorial review, the Fin Review told us this morning. Which had us scratching our heads. What’s next, Malcolm Turnbull to review NBN coverage?

Turns out we needn’t have worried. Smith will have some input, sure, but he’s not writing the review. The Fin got it basically right but gave the impression Smith was on equal footing with Kerry Blackburn. To quote: “Smith will work on the review with Kerry Blackburn, a journalist and broadcast consultant who has consulted for the BBC Trust for eight years.”

“Normally, the relevant program teams are informed about the review after the content which is to be reviewed has been broadcast and/or published, to assist in preserving the integrity of the process.

“However, given that this review has been the subject of some comment in the Financial Review this morning, I think it might be useful to set the record straight now.”

Meanwhile Smith, along with a few others, have been invited to submit their thoughts about the financial coverage.

“As part of the review, Ms Blackburn was keen to get a range of views from stakeholders about the ABC’s business coverage as well as reviewing a sample of the actual content. To achieve that, Mr Smith has agreed to provide input from the perspective of a former CEO of a major company. A wide range of other companies, business organisations and trade unions have also been invited to provide short submissions of their own.

“In addition, we are currently gathering audience feedback, complaints and comments in relation to our coverage.”

Drops and sources. Speculating on the sources behind a journalists story is fun, but fraught at the best of times. Yesterday saw a bit of inter-News Corp mud-flinging on Twitter, after Peter van Onselen claimed, in since “unreservedly retracted” comments, that the Herald Sun‘s Stuart Robert scoop was “a drop from the Abbott camp to hurt one of Turnbull’s backers”. “Dirty business,” PVO tweeted, to rebuke from the Herald Sun’s national political editor Ellen Whinnett. “You are completely wrong,” she wrote. “You didn’t break the yarn. You have no idea how we got it. You’re wrong.”

PVO, who we’ll note was tweeting all this while on live television, shortly later retracted his comments and deleted his tweets. “My apologies … Great yarn and obviously I don’t know the source/s. Withdrawn unreservedly!” —Myriam Robin

Fleet Street dead meat. The Guardian is losing millions — its website is successful but can’t make up the losses — Trinity Mirror, owners of the Mirror and other papers, has already cut dozens of jobs, the Murdoch empire is looking to cut costs and relaunch the Sun’s website in an attempt to arrest the decline in revenues, and this week news emerged that the wealthy but reclusive Barclay brothers have ordered a review of The London Telegraph with an eye to cutting costs or selling the paper outright. The Guardian is planning to cut dozens of jobs to cut costs to try and stop the drain from its cash pile, which would be exhausted in eight years’ time at the current 100 million pound rate. Like media sectors the world over, the old Fleet Street is hurting — but you wouldn’t know it with so many papers competing fiercely every day.

But beneath the vibrancy it is a very different story, as a long feature on the health of the UK newspaper sector on the Financial Times website this morning makes clear. It contains some terrible financial and sales details about what is supposed to be the best newspaper sector the world. The story quotes a report from well-known London based analysts Enders Analysis that print ad revenue fell 112 million pounds (or close to A$230 million) last year. That’s more than A$4 million a week.

At that rate bean counters can see the cash draining out of their businesses every week. And since 2010, national print newspaper spending has fallen by a third to 880 million pounds, or nearly A$1.8 billion. Sales of papers have slumped to 7 million a day from 13 million a decade ago. Online advertising in the UK was around 3 billion pounds (well over A$6 billion) last year. That’s risen from a very small amount a decade ago and eat the print ad revenue streams of the groups such as Telegraph, FT, News UK, Guardian Media Group, Daily Mail, Trinity Mirror and more, plus the contracting UK regional and local newspaper groups, which seem to be losing jobs by the week.

With the December quarter and 2015 newspaper circulation figures due out in Australia in the next week, and results from the likes of Seven West Media (owners of the West Australian), APN (owners of a string of regional dailies on the East Coast) and Fairfax Media (The Age, SMH and AFR), expect the bad news to continue in Australia.

US cable sector struggles. Time Warner has joined companies such as Disney, 21st Century Fox, Viacom and its offshoot, Time Warner Cable, in reporting weak or unimpressive revenue and earnings from its cable businesses, further underlining concerns about the continuing health of the sector. Time Warner shares plunged 8% (to a near three-year low) in the wake of the release of the poor quarterly report and ended the day down close to 5%. Investors were not taken with the surprise news that the company’s crown jewels, the HBO cable channel, had produced weaker-than-expected revenue growth, as had its Turner television network. On top of that the Warner Brothers film studio revenues fell 15% in the quarter, echoing the poor performance by Fox’s film businesses.

That helped push the Time Warner’s revenues for the quarter down an unexpectedly large 6%. Despite that the group reported higher earnings, raised its full-year profit figure for 2016. But it lifted dividends and announced a US$5 billion share buyback, a sure sign it sees rough times ahead this year for the shares which will need support in the market (Fox also has a buyback underway).

Disney shares fell 3.7% because of the weak revenues and outlook for the cable business, such as ESPN. Disney management tried a sleight of hand with analysts by saying ESPN subscribers had had an “uptick” in recent weeks, but didn’t put numbers to that claim. ESPN has lost millions of subscribers in recent years as consumers reject its high cost programming and that of other cable channels and “cut the cord”. Not even the obvious revenue and earnings boost from the latest Star Wars movie could arrest the decline in the share price because investors knew that was going to lift revenues and profits. — Glenn Dyer

Front page of the day. Well, that’s one way to put it. 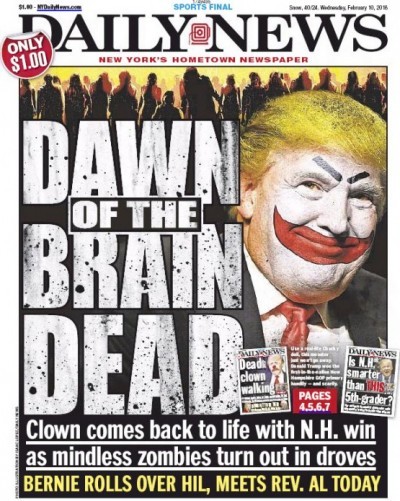 Having seen Bejamin Habib’s interview one can only feel empathy for his plight – live to air means there are no safety nets, any slip is permanent.

Doubtless Dr Habib has other strengths including expertise in an area where most of the Oz public would flounder for informed opinion. I hope he has an opportunity to be interviewed again & suggest he request it be pre-recorded. Simply knowing mistakes can be edited should have a calming effect on an interviewee.