Lambie on the warpath about, er, something ... Turnbull is upstanding ... minister for the undead ...

Mind games. Independent Senator Jacqui Lambie was on a mission at Senate estimates last night, but we’re not 100% sure what she was trying to find out. While questioning ASIO director of security Duncan Lewis, Lambie and Attorney General George Brandis had this exchange, in which Lambie seems to imply that ASIO should be investigating union thugs:

LAMBIE: “Royal commissioner Heydon said he had discovered grave threats to the authority and power of the Australian state. Have you been made aware of those threats by the Royal Commissioner?”

LEWIS: “Senator, I am aware of the royal commission, and I have had no contact with the Royal Commissioner at all. The matters as I understand it were in the area of the law, and are really law enforcement issues, not issues that impact on ASIO.”

BRANDIS: “Can I add to that? The Royal Commission was about law enforcement, or what we might more broadly call rule of law issues. The inquiry was quite specific to matters within its terms of reference. Those terms of reference did not [refer to] the two principal activities for which ASIO is responsible: counter-terrorism or counter-espionage.

LAMBIE: “Oh, OK. So, given the power and authority of the Australian state is under threat from a variety of Australian sources, do you expect to have access to the secret volumes of the Heydon Royal Commission?”

LAMBIE: “I’m just a bit concerned about the grave threat to the power and authority of the Australian state. I mean, phoa, blow me away, I would have thought that ASIO, given it was such a grave threat, would be involved.”

BRANDIS: “Senator, threats to the state can also take the form of threats to the rule of law by systemic criminality, which is what Heydon found in aspects of Australia’s workplaces and industrial practice. That’s not the subject matter that ASIO was created to deal with.”

LAMBIE: “No, but it would be there to deal with a great threat to the power and authority of the Australian state … those six or seven words are quite outstanding …”

LAMBIE: “So it is not a grave threat to the power and authority of the Australian state? Is it or isn’t it?”

BRANDIS: “No it is a grave threat, it’s just not of the kind that ASIO was established to deal with.”

LAMBIE: “But Heydon didn’t say he finds a grave threat from systemic criminality though, did he?”

BRANDIS: “I think if you look at public volumes of report, that’s precisely what he found.”

At this point, Lambie changed tracks, asking, “OK. Mr Lewis, do you have concerns about the legitimacy of the money coming from mainland China?” But, again, ASIO wasn’t much help. Or as Lewis put it, “I’m sorry, Senator, I can’t comment. What money?” As she later explained, she was trying to ask about corrupt foreign money.

Lambie also asked for a state by state breakdown of the number of “traitors and terrorists”, and how many were Islamic and non-Islamic. 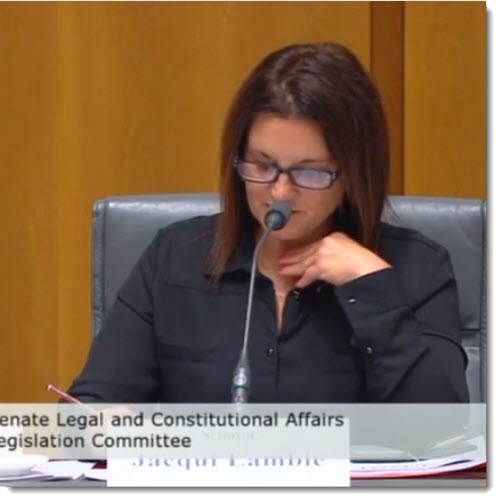 We also found out last night that Tetris is popular across the government — more specifically Operation Tetris. The process, which the government claims has saved taxpayers $200 million, involves minimsing the amount of space each department takes up, and sometimes putting two departments in the one building. Finance Minister Mathias Cormann told the committee last night the Department of Veterans Affairs had slotted into the Australian Tax Office’s building, meaning their lease didn’t need to be renewed. Believe it or not, the public servant charged with answering these enquiries is deputy secretary John Edge. Operation Tetris is due to be rolled out nationally. There will be more on our estimates live blog today.

Minister for zombies. In a move that has shocked people in all corners of Australian politics, Environment Minister Greg Hunt has been named Best Minister in the World at the World Government Summit in Dubai overnight. The award, which recognises leaders “who lead quality successful initiatives”, went to Hunt because of his work in reducing carbon emissions and is the first time the title was awarded. The World Government Summit is a four-day junket focusing on technology and the future. Before Hunt accepted his prize overnight attendees could also take part in a Zombie Apocalypse Preparedness Live Demo (not an undead demo). We hope that Hunt can bring back this knowledge and share it with the nation.

Be upstanding. We’ve written about Malcolm Turnbull’s standing desk before, but now we can actually see it for real. Turnbull’s official photographer, Sahlan Hayes, posted this photo of the PM to Instagram this morning, showing him “getting a language lesson from members of the Ngunnawal community”.

HP gets stroppy. A columnist for the Financial Times in the UK received an email threatening the loss of advertising at the paper after he wrote a column criticisng tech giant Hewlett Packard. According to this report, Lucy Kellaway wrote a piece on January 31 titled “Boneheaded aphorisms from Davos’s windy summit”, which pulled apart a statement by Hewlett Packard Enterprise chief executive Meg Whitman. The journo has revealed that after the piece she received an email from HP’s marketing and communications chief Henry Gomez saying “FT management should consider the impact of unacceptable biases on its relationships with advertisers”.

“It is my editors’ steadfast refusal to consider the impact of stories on advertisers that makes us the decent newspaper we are. It is why I want to go on working here. It is why the FT goes on paying me.”

Welcome to the ideas boom! It’s never been a more exciting time to be an advertisement in a newspaper (or getting paid for government advertisements). In case we forget to have ideas, the government is reminding us we’re in an #ideasboom: 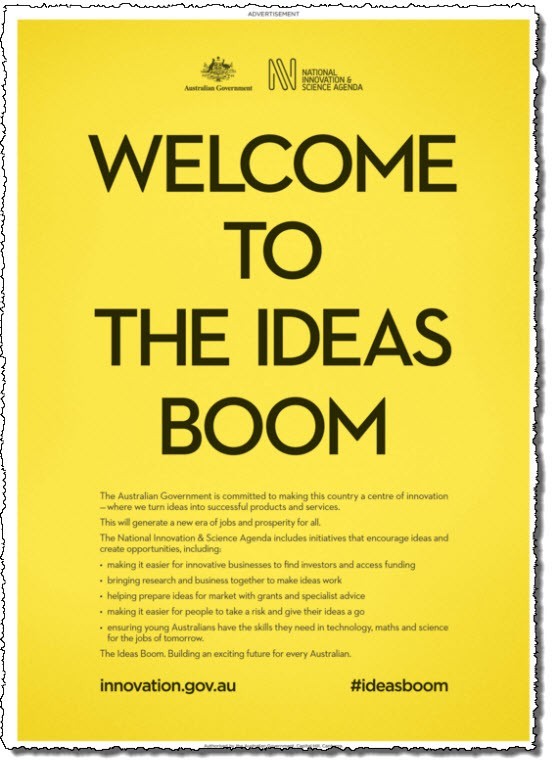 It seems clear to me that Jackie Lambie is taking the Mickey out of Dyson Heyson’s report-a political witch hunt that has been discredited. Good on her.

I saw the ideas boom ad on TV last night and wondered why we are wasting money on this bollocks. Was the short lived GST idea part of the ideas boom?

Tony Wright has written a funny piece re Hunt in today’s Age.

Agree Shasha, Lambie taking the pizz with Heydon’s overblown rhetoric. Ooh I have uncovered a grave threat to the Australian State but I have put it all in a confidential report that you can’t read. Now we are left to draw our own conclusions about the grave threat posed by those uncouth CMFEU bullies. And remember after 2 years enquiry and $50M spent he had only uncovered the tip of some enormous iceberg. No wonder Lambie is scared and wondering why ASIO hasn’t at least been briefed on this national threat.

Re Greg Hunt, he gets a gong for reducing carbon emissions! Haven’t they increased? A minor detail I know.

The country may not be in the very best of hands, but we can be thankful the Crikey Commissariat will never have sufficient support among Australian Citizens for its ‘ideas’ to become Law, can’t we.