Breaking "exclusive" news! Schools are encouraging kids not to bully each other! Clutch your pearls!

In a front page “exclusive” yesterday morning, Australia’s national broadsheet entered into a long-running campaign by the Australian Christian Lobby against educational material designed to reduce bullying in schools against LGBTI people.

Since July last year, the group purporting to represent Australian Christians has been lobbying the government to defund the $8 million program, which it says is “promoting radical sexual experimentation”. Back then it was over an OMG I’m Queer guide for queer kids, which can be handed out in schools that decide to opt in to the program (about 500 schools have done so nationally).

The current campaign is against a new so-called “gay manual” released late last year, which has long been available on the Safe Schools Coalition’s website. The All of Us document consists of seven videos and lesson guides designed for years 7 and 8. Far from a “how-to” guide for gay sex, the guide instead outlines how to create a safe space for LGBTI students.

The guide reports that 75% of LGBTI students face discrimination or abuse, and 80% of those experience abuse at school. The guide has lessons around whether students identify as gay, bisexual, transgender or intersex, and includes a large component on how straight students can help be an ally to those students.

One aspect highlighted by The Australian‘s article outlines that it should not be assumed that every boy has a girlfriend, or every girl has a boyfriend, and encourages straight people to stand up to bullying and mind language such as “that’s so gay” around other students who may be struggling to accept their sexuality. Controversial. 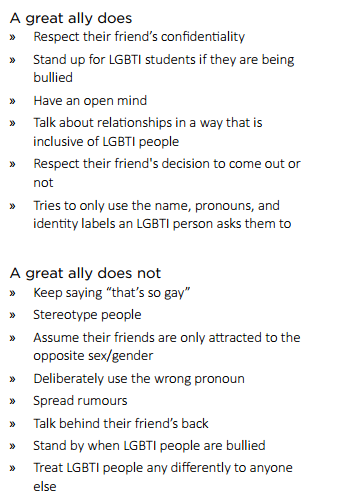 The “activists” who developed the guide do not go into schools to teach the material themselves; it is designed for teachers to use. Safe School Coalition is often approached by schools that want to teach students how to create a safe space for LGBTI students.

Far from being an “exclusive” for the national newspaper, the campaign against the Safe Schools Coalition has been running for months, and is being led by ACL’s Wendy Francis — a failed Family First election candidate — who wants to bring an end to anti-bullying material because essentially she argues that children should not be exposed to material of that nature at that age. The Australian Christian Lobby has issued a number of releases around the “rainbow politics” in schools — while taking a break from arguing against same-sex marriage and demanding LGBTI people not bully them by calling them bigots.

Complaints from the ACL against the program have escalated in the last week following news that Victorian mother Cella White was “forced” to take her children out of Frankston High School because of the All of Us program. In late January, before the news she was pulling her children out of the school was made public, White deleted her Twitter account. She had retweeted the Australian Christian Lobby’s Lyle Shelton numerous times, along with retweets of those opposed to abortion. In an interview she conducted with Shelton in late January, she revealed she had discovered the Safe Schools Coalition material online herself, before the school made plans to introduce it, and asked the school about it.

“I was given excuses that these kids need help, we’ve got to be tolerant, changing world, things like that … They hang up posters … and the posters are leading posters … It’s almost recruiting.”

White also complained about a rainbow footpath placed outside the Department of Education when she visited last month, during Melbourne’s annual Midsumma festival for the LGBTI community.

According to the ACL, a Perth mother also says she will be home-schooling her children because of the program. Some 490 schools across Australia (excluding the Northern Territory) have implemented the Safe Schools program.

The Australian Christian Lobby’s war on the anti-bullying program does not appear to be gaining much traction, with Safe Schools enjoying bipartisan support in Parliament.

The Safe Schools Coalition has existed since 2013 and receives modest funding from the federal government of $8 million, while the government spends more than $200 million on its school chaplains program. The overwhelming majority of chaplains in the schools are of the Christian faith (2312 chaplains out of 2336).

While strongly lobbying against this material being distributed in schools, the Australian Christian Lobby is also complaining about Catholic schools being targeted for distributing flyers arguing against same-sex marriage in schools, claiming it is a free speech issue.

Another group similar to the Australian Christian Lobby, the Australian Marriage Forum, seized on The Australian‘s report yesterday, claiming that the program is designed to “lock” young people into “sexual confusion” in order to have “more fresh young things joining the adult gay community”.

For what it’s worth, the Melbourne Age today has a page 27 comment piece from Kevin Donnelly of the Australian Catholic University against the Safe School Coalition making the same claims. So the Australian isn’t alone.

If Wendy Francis (pleasant enough person, but dim-witted and dangerous) and Lyle Shelton (outright loon and equally dangerous) can produce any sane person who was “recruited” into homosexuality by other homosexuals, then they have an argument. Currently, they have nothing but shrill diatribes, cherry picking “facts” and outrage of the most egregious kind.

(from me as an individual)

Thank you so much to Crikey and Josh Taylor for this piece.

If it means one less person believes the ACL and one more LGBTI young person is spared even one iota of distress it will make a difference.

I’m a complete outsider to all of this, but what I got from the article is that ACL seriously hates LGBTI people to the point where they want the bullying to continue in schools.

It’s a sad thing that there are some Australians who think it’s ok to behave like this.

The ACL and their supporters are motley bunch of wankers and weirdos, not at all fit for modern society, and hopefully shunned by the many decent christians out there…..