An Atlantic contributing editor has been caught swapping the promise of favourable coverage for an advanced copy of a Clinton speech. And other media tidbits of the day.

Scott says nothing to see on Nick Ross saga. ABC managing director Mark Scott appears reluctant to order or encourage an inquiry into the allegations of former ABC technology editor Nick Ross, telling senators he is “comfortable” in the judgement of ABC current affairs head Bruce Belsham and other editorial decision-makers.

Last month, Ross took redundancy from the ABC, and, on his way out, said he had been gagged from writing about the NBN because the ABC was reluctant to criticise the project being run by in-coming communications minister Malcolm Turnbull. Ross was a fierce critic of the Liberal Party’s NBN.

Belsham was drawn into the Ross saga when Ross released a taped conversation he had with him. In the conversation, Belsham asks Ross to find something critical of Labor’s NBN plan to write about, to provide some “insurance” in case of claims of bias.

The transcript, published by New Matilda, has prompted calls for an inquiry, both by Greens and Labor senators as well as former ABC staff-elected board director Quentin Dempster.

But Scott told Senate estimates he was comfortable with the decision-making of his editorial managers.

“I am comfortable in Mr Belsham’s judgement. I understood, and have been briefed, on debate around the coverage. I also knew about decision to end the website [the ABC technology portal that Ross worked for]. And I was aware that Mr Ross had left the organisation.

“Our feeling is there was disagreement about this. Ross has now left – I’m not sure there’s much more to investigate.”

Scott expressed his personal support and respect for Belsham, who he said was an “unfortunate victim in these circumstances”.

Greens senator Scott Ludlam asked Scott why no ABC program had reported on Ross’ allegations. Scott denied that he’d had anything to do with any directive telling ABC journalists to not report on the issue. — Myriam Robin

Why needs editors anyway. As part of his commentary on former ABC technology editor Nick Ross yesterday, Mark Scott said Ross’ now-infamous 11,000-word piece, highly critical of the Coalition’s NBN plan, had been published on the ABC’s Tech portal had been put online without any editorial oversight.

“He published that piece without any upward referral to editorial management,” Scott said. “No one went through it with him. That’s highly unusually. I cannot recall in 25 years that having happened”.

Crikey asked Ross if that was true, and he said it was. But he also added that the 20 or so pieces preceding it hadn’t been checked by his editors either. “It only drew eyebrows much later when Turnbull [was] grilled [about the piece] … It’s all hindsight.”

This raises plenty of questions in itself.

Until the ABC axed its technology portal and attempted (unsuccessfully) to integrate Ross into its broader business journalism team, Crikey’s understanding is that Ross had operated the portal largely alone. The portal published his commentary, as well as opinion pieces from vendors in the tech industry. Asked about Ross’ role at a previous estimates, Scott said he was there to “edit a website”.

It appears Ross’ writing on the ABC tech portal only began to be closely scrutinised after it drew controversy. Which begs the question — perhaps if the ABC hadn’t left its dedicated online technology coverage up to one guy who filed primarily to a website he edited, things wouldn’t have gotten so far from the ABC’s usual editorial processes.

The ABC has since rationalised its websites, and the tech portal managed by Ross was one of those that got the axe. — Myriam Robin

“It was the sitcom which spawned a fleet of opinion pieces more than a month before its premiere, but now Nine’s first home-grown scripted comedy in 15 years has finally been revealed. And even if the response on social media was mixed, it attracted 1.249 million metro viewers — well above the 900,000 Nine was reportedly hoping for — and plenty of positive responses …

“It’s good, if not yet great. There are some solid laughs — an early highlight is a scene in which Jack (Darren Gilshenan) gets himself seriously tongue-tied when trying to talk to his new neighbour Fou Fou (Michael Denkha) and ends up mentioning all variety of inappropriate things, including the Cronulla Riots and organised crime …

“The only major problem with the first episode is a slight structural unevenness — with just six episodes in this first season, the writers haven’t quite balanced the need to establish these characters and their backstories with the need to leap straight into the action of the series.

“But it’s a decent and promising start for the show. If it manages to attract decent audiences for the next few weeks, we could be seeing a lot more of the Habibs.”

One way to get the scoop. An Atlantic contributing editor has been caught swapping the promise of favourable coverage for an advanced copy of a Clinton speech. 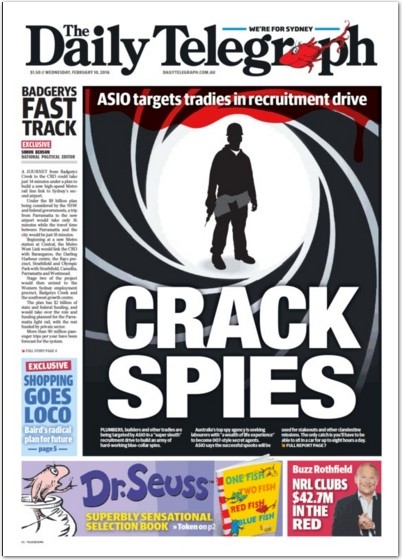 What else if the ABC doing to curry favour/insurance with this government – besides Sales, Alberici, Lane, Jones ….?
Scott can’t “recall” what happened (editorial management-wise) to Ross happening in 25 years? How long had Ross worked there? 26 years?

A shame that there are so few of the Ross tendency and so many Scott-type smarmers in the ABC.
Good riddance, no loss but I’m not heartened by his replacement, fresh from mudorc’s foetid clutches.

And Dr Seuss – now there’s contest?
Him or Limited News – which one is more believable?