The divide between government policies and popular opinion grew ever-wider this week.

Prime Minister Malcolm Turnbull is facing calls from Opposition Leader Bill Shorten to sack his Human Services Minister Stuart Robert — entering this week’s index in eighth place — after he tagged along with a major Liberal Party donor when he was Assistant Defence Minister to a mining deal with the Chinese government-owned company Minmetals on what he claims was a private trip to China. Turnbull has ordered the Secretary of the Department of Prime Minister and Cabinet Martin Parkinson to investigate Robert’s role and look into any conflicts of interest.

Foreign Minister Julie Bishop, up nine places into second this week, defended Australia’s $25 million pledge to assist Syria and Iraq after other nations promised relatively larger sums. She was also asked by Senator Cory Bernardi to not endorse former PM Kevin Rudd as the next secretary-general of the United Nations, and is considering imposing further sanctions on North Korea after it launched a long-range rocket.

Victorian Premier Daniel Andrews was the first state leader to ask PM Malcolm Turnbull to let the 267 asylum seekers affected by the recent High Court ruling stay in Australia, rather than deport them to the Nauru detention centre. He also took to social media to share his experience as he took a family of asylum seekers to the zoo. Other state leaders followed suit, including NSW Premier Mike Baird, SA Premier Jay Weatherill, QLD Premier Annastacia Palaszczuk, and ACT Chief Minister Andrew Barr.

Health Minister Sussan Ley has denied the government plans to privatise Medicare, as it considers outsourcing benefit payments, and announced new medicinal cannabis laws will be tabled and that she is optimistic it will have bipartisan support.

Shadow Treasurer Chris Bowen, jumping 18 places into twelfth this week, said the PM’s backpedalling on the GST was because it was unpopular amongst Turnbull’s backbenchers and that if he doesn’t proceed it will be “humiliating for Malcolm Turnbull”. As well as launching his own party, Senator Nick Xenophon called for a safety audit of Airservices Australia after two aircraft aborted landings at Melbourne Airport, and questioned Australia Post CEO Ahmed Fahour at a parliamentary committee as to whether the organisation has discussed the privatisation of Medicare payments with the government.

And “father of the House”, Howard government minister and former Abbott government whip Philip Ruddock has announced his retirement after being appointed Special Envoy for Human Rights, with extensive media debate about his legacy as Immigration Minister and Attorney-General. 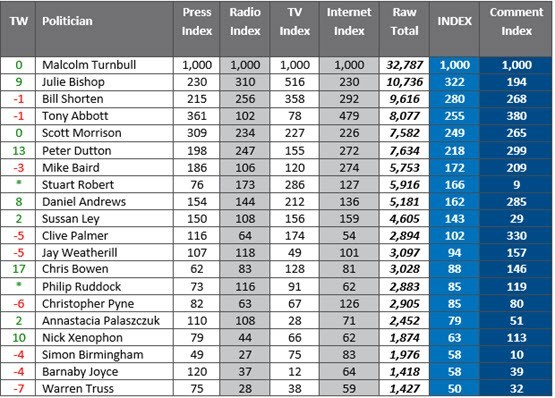 As #letthemstay trends on social, protests against offshore detention around the country are hoping to get the attention of the PM and Immigration Minister Peter Dutton.

Last week the United Nations said the Wikileaks founder’s period at the Ecuadorian Embassy amounted to arbitrary detention, and Swedish prosecutor Marianne Ny says she will renew attempts to question him over a sexual assault allegation.