Who needs a UN human rights ambassador? Not us, says Bishop. About a year ago, Professor Ben Saul, one of Australia’s leading human rights lawyers, wrote an academic paper proposing Australia create a themed human rights and international justice ambassador to the UN, based loosely around a role that currently exists in the United States. Australia already has ambassadors for terrorism, women and girls, and the environment, so one specifically targeting human rights makes sense, Saul argued. He wrote to foreign minister Julie Bishop suggesting the idea to her.

And he got a response back.

While he’s on holiday at the moment and can’t access the hard copy, he told Crikey yesterday, that, from memory, “the gist of her letter in response was that she believed it is unnecessary because Australia’s human rights diplomacy is already adequately well served by our existing embassies, including our mission in Geneva”. Which is why Saul was shocked to hear of Phillip Ruddock’s new position yesterday. It certainly seemed to him the government wasn’t keen on the idea not very long ago.

Under HRH’s watchful eye? Does Malcolm Turnbull’s prime ministerial suite in Parliament House retain a picture of the Queen? Penny Wong wants to know. She asked Department of Parliamentary Services staff in Senate Estimates yesterday what furniture had been shifted in the move from Tony Abbott to Malcolm Turnbull. They promised to take the question on notice, which means we’ll be waiting a few weeks to know for sure. We do know 15 other pieces of furniture have been moved, though, again, the question was taken on notice. It has previously been reported that Turnbull had a standing desk installed in the prime ministerial office after stepping up to the top job.

If the portrait of the Queen no longer adorns Turnbull’s office, Senate president Stephen Parry says he wants it. Seems there are still plenty of monarchists in Parliament.

Meanwhile, the office lacks one marble table (infamously broken during the post-coup party). The table is being repaired in-house and will presumably be returned to the prime ministerial suite soon. Under questioning it was revealed that the table would need a completely new sheet of marble, but DPS staff assured Wong that Abbott had paid for it — $1843 plus GST. The cleaners who reported the table broken were not punished in any way (Wong made made sure to ask). There’s more at our shamelessly wonky estimates live blog.

Say what now? Is this the longest committee name we’ve ever had? At 37 words we think so:

Happy 20th. Time flies when you’re having fun, and believe it or not, next month marks 20 years since the Howard government was elected. The Liberal Party is holding a reunion dinner at Parliament House on March 8 to celebrate the occasion, with tickets costing $135. The details say: “This reunion event has been priced ‘at cost’. All receipts are banked to the Federal Campaign Account.” Years ago, Crikey created this list of where former Howard government staffers ended up — some like Matthias Cormann and Peta Credlin went on to become household names. As our tipster writes of their current positions, “some gluttons for punishment have realized their political aspirations  …  Not surprisingly a large number are public affairs and government relations specialists”. So where are Howard, Rudd, Gillard and Abbott staffers now? Is there a pattern? Drop us a line.

Bishop gets the bacon. Members’ and senators’ list of declared interests mostly include pages of upgraded flights and tickets to sporting events, but Foreign Minister Julie Bishop recently declared something more than a bit unusual. In December Bishop declared two pigs as a gift from the Minister of Pato/Wapenamanda Community, and two pigs as a gift from the Mambisanda Immanuel Lutheran District Hospital. Both sets of pigs were apparently donated to local hospitals. Bishop’s register is back to normal programming though — the latest addition is tickets to the Portsea Polo. Bishop’s colleague Andrew Robb has also updated his register with a gift from John Short at Aurizon Australia — a framed original cartoon by David Rowe at the Australian Financial Review. Now we just wonder which cartoon it was.

Ruddock with that Hotline Bling. Much will be said of Philip Ruddock’s time in Parliament. We will miss this moment, which proves that he’s always been at the forefront of technology: 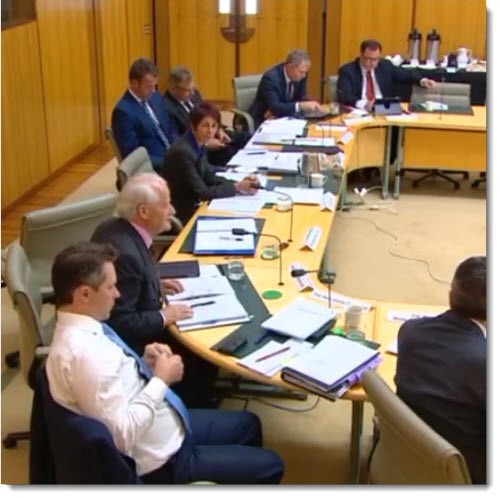 Good to find that all the necessary analysis of this thread’s relevance had been done before today.