What makes Rita Panahi tick? And other media tidbits of the day.

Is the ABC edging out SBS? No one at the ABC told SBS that Aunty intends to schedule Foreign Correspondent at the same time as SBS’ Dateline, SBS managing director Michael Ebeid told Senate estimates this morning.

“Given there’s very few international current affairs programs in Australia, I think it’s a bit of a waste, frankly, to have them on at same time. And Dateline has been in the slot for last four years. I’m disappointed, and still am.”

Ebeid said he had heard rumours the programs were being scheduled at the same time, but he hadn’t been sure until he saw comments from an ABC spokesperson in Amanda Meade’s Weekly Beast column. He said he still hadn’t been advised by the ABC if it was definitely happening.

The charters of both ABC and SBS say each should take into account the other’s programming. Senators noted it wasn’t the only time the ABC appears to have swooped in on SBS’ turf: last year, Aunty bid on the Asian Football League. As SBS has been airing football for 30 years and had hoped to air the league itself (though it couldn’t match the ABC’s offer), Ebeid strongly criticised Aunty for moving in. The broadcasts went on to rate very well for the ABC.

Senator Sam Dastyari asked whether there were any lessons in this for the government, given there have now been two situations where both broadcasters, each acting in its own self-interest, appear to be undermining the joint interest. Ebeid said given both organisations were independent of government, one shouldn’t ask what the government could do (though he noted both charters do require the organisations to be aware of each other’s programming).

No doubt the ABC will be questioned on this later today — we’ll be covering Mark Scott’s estimates appearance on our estimates blog.

On another issue, Dastyari asked Ebeid whether any SBS executives had received bonuses as a result of the ratings success of Struggle Street, a program that aroused fierce controversy last year. Dastyari assured him no one would have, saying no executive’s ratings KPIs were based solely on the success of one program. — Myriam Robin

Jaspan takes on Nine. It must be an awful week for CPA Australia CEO Alex Malley.

First, the Fin Review won’t give him a break (five slaps over five days in Rear Window and counting), and now, his Channel Nine show has to be rebranded, after The Conversation (the academic opinion website) argued “The Conversation with Alex Malley”, a new program featuring the CPA exec on Channel Nine, breached its trademark.

The Conversation has three separate trademarks over its name, across a range of classes. The naming of Malley’s show, which on social media was dubbed “Conversations TV”, is “unfair and potentially confusing”, according to The Conversation editor Andrew Jaspan. But he told readers yesterday afternoon that the issue with Channel Nine had been resolved.

“At our request, Channel 9 has agreed to cease referring to the program as ‘The Conversation’ and will, after 8 airings of the show, rebrand the program. Channel 9 have placed a disclaimer about the use of our name on their website and associated social media channels,” he added. 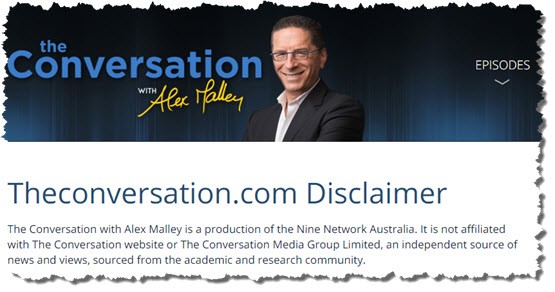 It appears the show won’t be rebranded until the end of the current season. The show premiered on February 6 with a guest Laurie Oakes, also of Channel Nine. — Myriam Robin

Catch a fox. No wonder the Murdoch clan is doing everything to wring every drop of publicity from the current series of Republican candidates debates and the ongoing feud between Donald Trump and star Fox host Megyn Kelly. The December quarterly results for Fox show that without another record performance by the cable channel and other Fox cable businesses, the key Murdoch clan company would have had a miserable quarter.

Like News Corp, Fox was hit by the stronger US dollar (which cut profit by around US$100 million in the quarter alone). Fox reported total quarterly revenues of US$7.38 billion, a fall of US$49 million, or 1%, from the US$7.42 billion of adjusted revenues reported in the prior year (adjusted for the sale of Shine). But the big attraction of Fox’s cable channels and especially Fox Network News is they have a much smaller exposure to the vagaries of the US dollar (it only impacts their international sales revenues, from markets such as Australia). Fox’s free-to-air TV business is also relatively insulated, but its production side (like the film studies) sells a lot of products into global markets where the greenback has crunched sales revenue and profits.

The latest results help explain last week’s surprise US$250 million in job losses and other cost cuts revealed last week. This will be concentrated in the film and TV businesses, with Fox aiming to buy out the contracts of some highly paid executives. Fox shares fell 2% in regular trading to US$25.54 and are down 26% in the past year. — Glenn Dyer

What motivates Rita Panahi? Right-wing firebrand Rita Panahi joined Young Labor in her youth, going so far as to volunteer to keep Paul Keating in power in the 1996 election.

On SBS’ new long-form features site (edited by ex-Monthly/Good Weekend editor Ben Naparstek), Meg Simons has a fascinating feature on the rise of the controversial Herald Sun columnist. It goes into detail about her rapid rise through the News Corp opinion empire (her first gig was a column in mX on the hotness of footballers), her childhood and background in revolutionary Iran, and her real estate portfolio, which makes her independently wealthy and able to focus on her writing with less of an eye to her finances. “She is full tilt at making it. I think she figured out at some stage that making it wasn’t just about money,” a friend of Panahi’s told Simons. “It’s about influence and profile. She is heading for the top.” — Myriam Robin

Front page of the day. A slightly off-colour cover of the Speccie … 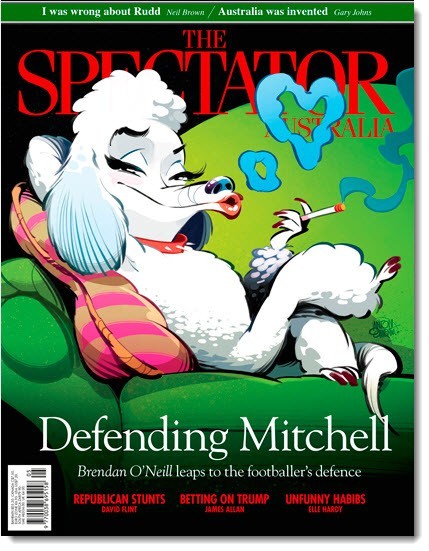 Why is the SpecciOz revisiting the old Chris Mitchell/Chaser matter? Has he come out yet again decrying the RSPCA having access to his metadata?