Essential: voters even more confused than the government on tax

Voters are confused about what exactly the government is trying to achieve on tax reform, but it hasn't tarnished Malcolm Turnbull's popularity with voters, today's Essential Report poll reveals.

Malcolm Turnbull has continued his effortless superiority over Bill Shorten, but voters are thoroughly confused about the point of tax reform, today’s Essential Report shows.

A distant second was maintaining government services, while encouraging economic growth was next, with fewer than 10% of voters identifying it, only a point ahead of “help business make bigger profits”. Coalition voters are particularly confused, with more than two-fthirds identifying the budget deficit as either the main or second reason for tax reform.

And for voters, “forcing multinational companies to pay a minimum tax rate on Australian earnings” is by far the most popular tax reform proposal, with 53% of voters strongly supporting it and another 25% supporting it. And it is uniformly supported across the political spectrum — indeed, 85% of Coalition voters support it or strongly support it compared to 81% of Labor voters and 84% of Greens voters. 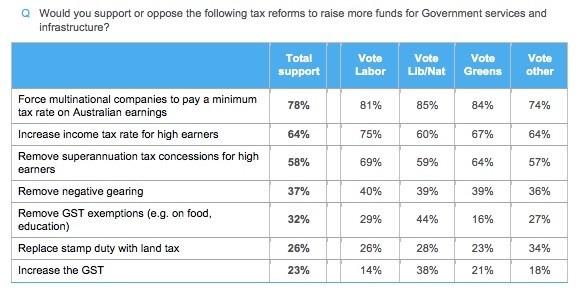 An increase to the GST has little support, and mainly from Coalition voters, but when voters are asked if they support a GST rise if income taxes are lowered at the same time, support increases to 38%, while opposition falls to 40%, suggesting the government might have had a chance of winning voters over if it had stuck with its GST plans. Even 31% of Labor voters were prepared to back a GST rise if income taxes were reduced at the same time.

However, voters overall prefer income taxes to rise over increasing the GST: lifting income taxes is supported by 29%, compared to 22% who back a higher GST and 12% who back a GST extended currently exempt products like food, health and education.

On voting intention, the Coalition has dropped a point on its primary vote to 43%; Labor and the Greens remain on 35% and 11% respectively, for an unchanged two-party preferred outcome of 51% to 49% in favour of the Coalition.

Why not replace the company tax with a levy on all withdrawals made from a bank account where the account owner has an ABN number. I’m sure the banks have the technology to make these calculations and remit the levy amount to the ATO.
This way, it won’t matter if Google Australia transfers inordinate amounts of fees to Google Singapore, the ATO will receive the levy when the transfer when it is made at the bank.
Companies based in Australia will all contribute to the ATO based on their activity.
Would this be a solution?

51-49-2PP and Shortens popularity is at about the same levels as Abbotts when he got the nod from the electorate..makes you wonder.. Supamal seems to be de-glossing at rate of knots..

Jaybuoy…I agree.
It looks like Talcum Malcum’s PPM polling is NOT transferring into votes for the LNP government.
If this poll is correct, we won’t know who will win the next election until the campaign proper gets underway later this year.
51-49% 2PP is a winnable situation for Labor!

AS so often though, our election will come down to the “rusted on”s and those with the WD40 of reality.
Trouble is, Reality is Another Country, they do things dumbly there.

No discussion about taxation can be productive (in the national interest) until those trying to deliberately deceive the public come clean about how money works and what taxation is for in a sovereign currency-issuing nation like Australia.