The Herald Sun may have editorialised a smidge on dole bludgers. Plus other media tidbits of the day.

Hun slapped down by APC. The Australian Press Council has found the Herald Sun in breach of its Standards of Practice over the publication of an article on July 6 last year headed “Welfare reforms ‘needed’”.

The council concluded that the publication had breached general principles 1 and 3, which say that reasonable steps be taken to “[e]nsure that factual material in news reports and elsewhere is accurate and not misleading”, “is presented with reasonable fairness and balance”, and “that writers’ expressions of opinion are not based on … omission of key facts”.

The original article, writing by a Daily Tele reporter but republished in the Herald Sun, reported on the Commonwealth government’s welfare policy, with focus on then-social services minister Scott Morrison’s concern over “long term dole dependence” and his argument for reform based on official data contained in the story.

Additionally, the APC also found the claim that all 70% of dole recipients were “milking the taxpayer” was not attributed to any government minister and could appear to be the opinion of Daniel Meers, the journalist who wrote the article, particularly as it had no balancing explanatory comment. The article was not intended as an opinion piece, but as news, which the APC found potentially misleading to readers.

The Herald Sun maintains it was a “fair and accurate report” of government facts. The adjudication is in today’s paper. — Crikey intern April Dudgeon

Bad News. News Corp shares hit record lows overnight Friday in the US as investors gave the weak second-quarter results the thumbs down. That means the shares will be sold off again in Australia today after they dipped 3.7% on the ASX on Friday to A$17.34 (around US$12.50). But on Friday night on Wall Street, the shares plunged 10% at one stage to a new all-time low of US$11.51 (that’s since the split in the Murdoch empire in June 2013). They closed down more than 6.7% at US$11.92, or around A$16.55.

The shares are down close to 15% in 2016 alone as investors avoid the company and its sinking newspapers in Australia and the UK (in particular) and the US. They have ignored the move deeper into digital real estate in the US and Asia in the past 15 months, plus expansion of digital media businesses such as Storyful. Even the accounts-cleaning sale and write-downs on the Amplify digital education business (to staunch hundreds of million of dollars and losses) has been ignored by questioning investors.

Revenue fell 4% to US$2.16 billion in the three months to December from a year earlier as advertising sales declined, and the stronger US dollar added to the financial pain. News reported a 56% fall in net earnings for the quarter to US$63 million, from US$143 million. Revenue in its news division (its biggest business by far, accounting for 61% of revenue) fell 8% to US$1.4 billion. Earnings before interest, tax, depreciation amortisation across News Corp slumped 20% in the three months ended December 31, to US$280 million from US$352 million the year earlier.

In the six months to December, revenues in the News and Information Services segment fell US$284 million, or 10%, from the first half of 2014-15. Circulation and subscription revenues for the six months ended December 31 fell US$60 million as compared to the corresponding period of fiscal 2015 as a result of currency fluctuations. Said News in its filing:

News said in the filing that segment earnings before interest, tax, depreciation and amortisation at the News and Information Services segment fell US$80 million, or 25%, for the six months ended December 31, 2015, compared to the first half of 2014-15.

Front page of the day. But what will Queensland children do for fun if there are no cane toads to hunt? 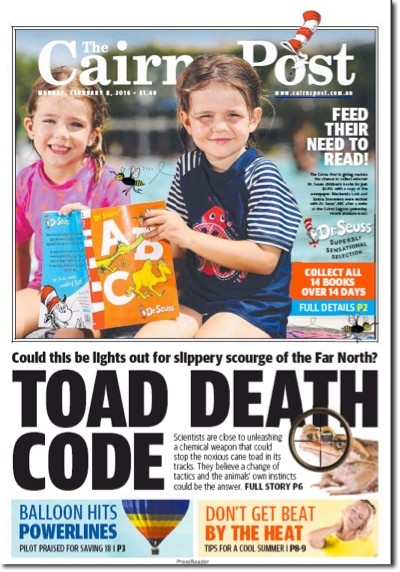 If News Corp published accurate, evidence based News instead of Government Propaganda their readership might improve.

Pity they don’t have a go at the big banks and their employees, just go for the easier targets.

All that bad news for the NewsCrap organisation is just good news for many Australians, make no mistake.

Crocs for the NT Times, cane toads for the Cairns Post, mudorc is in his muck and all is foul with the world.