Speeding Saudis ... Pliberseks at war ... GetUp gets it wrong

Diplomatic lead foots. The Saudi Arabian embassy has once again been revealed as the mission most likely to ignore Australia’s road rules. In a series of documents from the Department of Foreign Affairs and Trade released under freedom of information, one member of the Saudi Arabian mission, whose identity is redacted, was fined for returning a blood-alcohol limit of more than double the legal limit, and others were fined for speeding more than 30 kilometres above the limit.

Under the Vienna Convention on Diplomatic Relations, diplomats in Australia are required to “respect the laws and regulations of the receiving state,” and the Department of Foreign Affairs and Trade expects that they should pay fines associated with traffic infringements, even if demerit points are not enforced and licences aren’t suspended.

In May last year a member of the Saudi embassy recorded a blood-alcohol reading of 0.115 and was warned of the serious nature of driving under the influence of alcohol, but because of his diplomatic immunity did not face court over the incident, which carries a maximum penalty of a $1400 fine or six months in prison for a first-time offender. According to internal DFAT emails, the son of a member of the Saudi mission was caught speeding at 126 kilometres per hour in an 80 km/hr zone, and when the driver was asked why he was speeding, he said it was because he needed to go to the toilet. A member of the Saudi mission was also caught 63 kilometres above the speed limit and told police it was because he needed to take his antibiotics. In a separate incident in the same three-month period as the other offences, a car believed to be attached to the Saudi embassy was clocked by police doing 107 km/hr in an 80/km zone, but failed to pull over when signalled to do so by police, who did not to pursue the vehicle.

The letters from DFAT chief of protocol Chris Cannan to the Saudis become increasingly pointed, writing in July “it is concerning that less than a year into his posting I have to write to you about repeated traffic infringements”.

“I note that this is the seventh letter I have written to you since January this year about repeat traffic infringements by Saudi diplomats. The embassy has by a very large margin the highest number of unpaid fines of the diplomatic missions in Canberra.”

Cannan also wrote that he would no longer support requests for visa extensions for a member of the Saudi mission because of his infringements.

According to the documents, which cover correspondence between January 1 and October last year, members of the United Arab Emirates, Egypt, Russia, Mexico, Turkey, the United States and others received letters warning them about speeding, using a mobile phone while driving and failing to stop at red lights, but the letters to the Saudi Arabian embassy overwhelms the release with 82 offences over 10 months.

Bishop’s choice? We reported recently that former prime minister Kevin Rudd’s bid for secretary general of the United Nations was going quite well, even though he continues to deny that he is a candidate. Since then it has been reported that Rudd’s possible candidacy has exposed even more fault lines within the government. It’s also been revealed this week that former prime minister Tony Abbott had given his personal assurance that Australia would support the candidacy bid of New Zealand’s Helen Clark — a former PM and now Administrator of the United Nations Development Program. Apparently Foreign Minister Julie Bishop wasn’t so keen on being left out of that decision, so we can’t help wondering what the conversation was like when this happy snap was taken. Julie Bishop posted the photo with Clark to Instagram overnight, saying that the two were “discussing scale of global development challenges” — they are both in London at the Syrian donors conference. 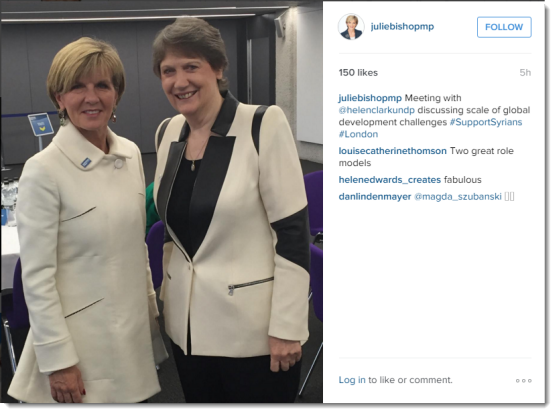 GetUp gets it wrong. Activist group GetUp was full of congratulations for the French government this week, posting a photo saying that the French upper house had just ruled that all hospitals and schools should make sure that 40% of food served was organic, sustainable and locally sourced.

The only problem is, the French upper house hasn’t passed it into law at all. According to the French Parliament’s website, it’s only at the first reading in the Senate, and is a long way from being law. 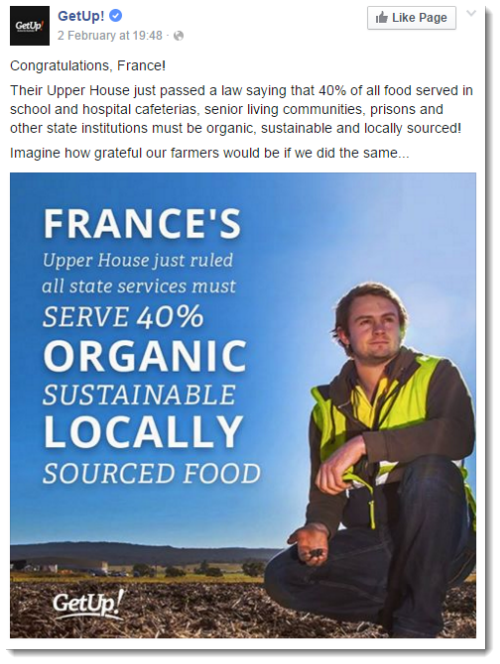 Friendly competition. This week is vendor week at street press The Big Issue, with famous faces joining homeless and disadvantaged vendors to spruik the magazine. New South Wales Premier Mike Baird wrote a touching Facebook post about his experience, while Anthony Albanese and Christopher Pyne cemented their friendship on the streets. Also participating is deputy Labor leader Tanya Plibersek, and her husband Michael Coutts-Trotter. Plibersek and Coutts-Trotter are in competition together, with some underhanded techniques revealed on social media: 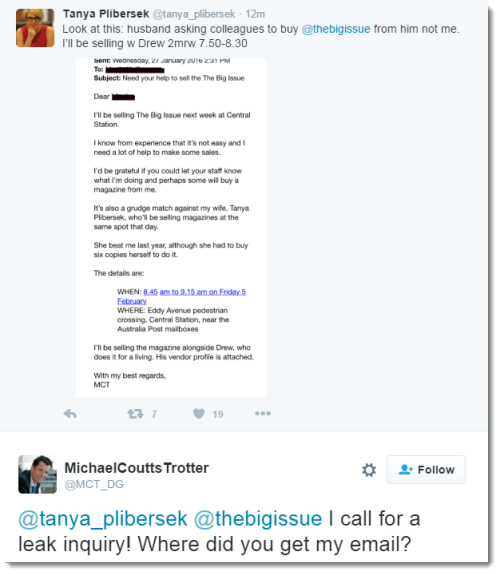 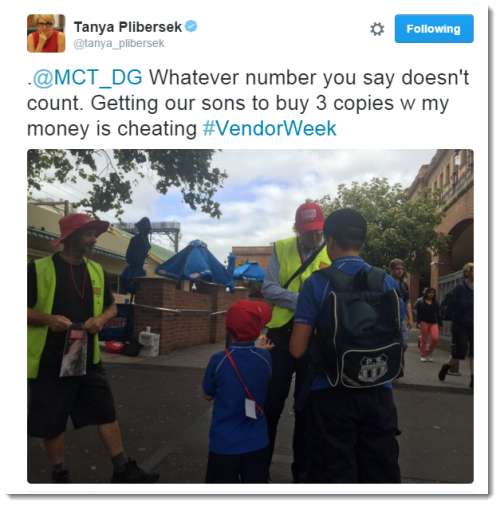 Labor: from blood donor to bleeding out?

Please Julie Bishop put the greater national interest first for a change? Don’t open the gate into that sand-pit for L’il Kev?