News and information at News Corp? Nah, let's talk about real estate. And other media tidbits of the day.

No news at News. News Corp CEO Robert Thomson’s start to the post-quarterly results teleconference told the real story of the weak result for the second-ranking company in the Murdoch clan’s global media empire. Instead of starting as usual with the largest business, the news and information operation (which accounts for the majority of revenues and assets), he started with the performance in News’ new love child – digital real estate in the US and Australia, and shortly Asia.

He was upbeat, describing News as the “world’s biggest player’ in digital real estate, telling analysts how wonderful the improvement in performance in Move (acquired in late 2014 for US$1 billion) and how REA Group in Australia dominated the local business and was expanding offshore. News and information, once the rationale for News Corp’s existence, was relegated down the pecking order in the cEO’s presentation, although he later produced a stirring defence of the worth of the papers masteheads as “powerful platforms”.

News reported profit of US$63 million, down from US$143 million a year ago. Revenue fell to US$2.16 billion from US$2.26 billion a year earlier as revenue dropped 8% at the news and information services segment, which accounts for two-thirds of News Corp’s total revenue. Digital real-estate business reported a 35% jump in revenue.

News finance chief Bedi Singh talked up the cost-cutting move within the Australian business at the end of the September quarter and how it would produce a “5% fixed cost reduction” from the second half of this financial year and into 2017. Singh said that ad revenues at News Australia’s papers fell 26% in the quarter and 11% in local currency terms. Circulation revenues edged up 1% in local currency sales because of higher digital subs revenues and cover price increases. Print sales continued to fall in the quarter.

In answer to a question from an analysts from Macquarie about the future of the print business and media reforms and “consolidation” in Australia, Thomson admitted that the Australian mastheads had had a “difficult quarter in advertising”. He pointed to the 5% fixed cost cutting program and how that would benefit the group, and then exclaimed that News was “not being defeatist“ about the power of print platforms like the Australian newspapers. While he said News would continue to investment in digital, “print has a future as a powerful platform”. He said the Australian mastheads were powerful platforms (as were all the group’s papers). But not one Australian paper was mentioned for praise in the briefing. — Glenn Dyer

Bad news for Foxtel. News said Foxtel had a tough December quarter thanks to the high dollar and rising costs. Subscriber numbers rose (they include subscribers to the Presto streaming service, which is co-owned with Seven West Media). News owns 50% of Foxtel (Telstra owns the other half). News said that satellite and cable subscribers rose 7%, but we don’t know from what to what as the churn fell.

Foxtel’s earnings before interest, tax, depreciation and amortisation fell US$43 million to US$155 million from US$198 million. And in local currency terms, EBITDA also fell, down 7% “due to planned increases in programming costs to support subscriber growth, costs associated with higher sales volumes, the public launch of Triple Play and continued investment in Presto”.

News said that Fox Sports — 100% owned — was also hit by the stronger US dollar, but had a solid quarter in local currency terms. Fox Sports revenues fell US$6 million, or 5%, compared to the previous year.  — Glenn Dyer

NYT journos under the gun. Despite a sharp rebound in fourth-quarter earnings and paywall revenues, but not advertising inflows, The New York Times is going to look at a wholesale revamp of the way its huge newsroom and website works, opening up the prospect for another round of job cuts. The NYT last cut 100 jobs in late 2014 by paying out journalists contracts, but the latest review seems to be a larger affair.

Operating profit for the fourth quarter jumped to US$87.7 million from US$62.4 million in the same period of 2014, driven solely by cost savings. The company said the paper added 53,000 new digital subscribers in the quarter and over the year paywall subscribers jumped 20% to 1.094 million, the highest ever. However, revenue in the latest quarter of US$444.69 million hardly budged from the US$444.68 million in the final quarter of 2014.

For the first quarter of 2016, the company says it is expecting weak revenue growth and a small rise in costs — pointing to renewed pressure on profits. Perhaps that is why the review of the newsroom and website is underway, led by Dean Baquet, the newspaper’s executive editor. A statement from the company and Baquet indicated the review would be looking for “further areas of cost reductions”.

“The simple fact is that to secure economic success and the viability of our journalism in the long term, the company has to look for judicious savings everywhere, and that includes the newsroom,” Baquet said. — Glenn Dyer

Video of the day. Poor Jeb Bush. We don’t even have the heart to mock him for begging an audience to clap for him. 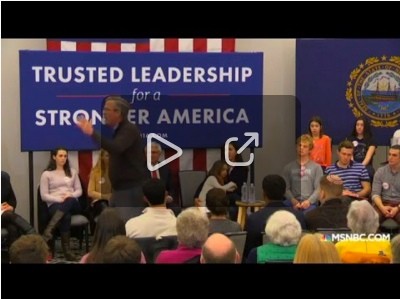 Front page of the day. Salim Mehajer is the gift that keeps on giving for tabloids … 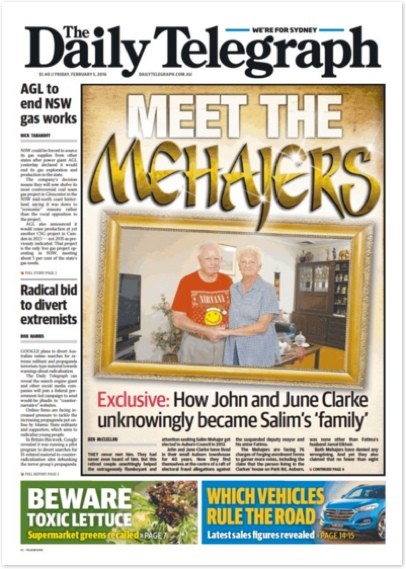 If Mehajer did not exist, it would a crime against decency, and Nature, to invent him.