‘An embarrassment or a disaster?’: journos weigh in on the gladiatorial interview

Kerry O'Brien says journalists these days are going for shock tactics, rather than eliciting information. But is that a bad thing?

“You’re a politician in federal Parliament these days,” Today host Lisa Wilkinson said to Clive Palmer on live TV this morning. “Is it fair to say your stint has been at best an embarrassment and at worst a disaster?”

“You fall asleep in Parliament. You often don’t bother to turn up. Your so-called Palmer United Party has imploded. You betrayed the faith of everyone who believed in you. What do you think the average Australian voter thinks of you right now?”

“I know you’re being supported by Rupert Murdoch, but let me answer the question,” Palmer responded. News Corp is not an investor in Nine.

The confrontation was promptly written up and given top billing on the websites of Australia’s major media outlets, with a focus more on Wilkinson’s attack than on Palmer’s answer (which responded to the question by speaking about his role in opposing unpopular government policies) … 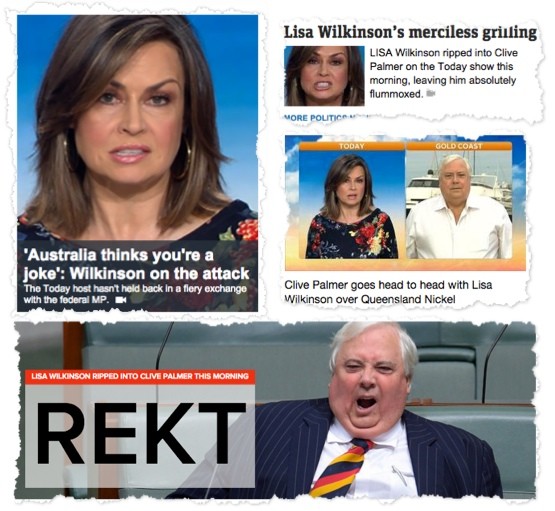 These kind of confrontations, arguably more explosive than illuminating, are a staple of the way some media outlets approach political interviewing. But has it always been thus, and is it a bad thing?

The highly adversarial nature of some political interviewing has been much remarked on in recent months. Last year, Malcolm Turnbull went on The Bolt Report to say that he prefers a “less aggressive” and “more forensic” style of interviewing, for example. It’s easy to shrug off a prime minister telling journalists how to do their jobs, but this week, the criticism came from one of journalism’s own.

“I think it’s too much the case. I think some people regard gladiatorial interviewing as good interviewing, and I never did,” he said. “It’s the nature of political interviewing now, certainly with those so-called ‘gotcha moments’.

“I never really consciously went for gotcha moments, but when you did occasionally get one it was, I thought, for the right reasons.”

The comments have prompted some reaction. Writing on ABC’s The Drum this morning, Monica Attard wrote it was “probably the most unoriginal insult to have been hurled at those who engage in that art”.

On Twitter, the political editor of News Corp’s Sunday papers, Samantha Maiden, was similarly sceptical. When Crikey approached her to explain her position yesterday, she told us times had changed from when Kerry O’Brien had more than 10 minutes to interview a politician on Lateline.

“My observation is that political interviews in particular tend to be shorter these days than they were in the past,” Maiden said. “Kerry O’Brien had the opportunity to do long-form interviews on Lateline in particular. When he did it, it was a totally different show.”

Others Crikey spoke to said the rise of media training was the biggest new hurdle for interviewers. Former ABC reporter and host Jim Middleton, now on Sky News, says if anything, the rise of “robo-comment” is what makes interviews adversarial.

“I think what’s changed if anything is that the politicians are increasingly determined to use interviews as an opportunity to recite the chosen brief rather than to engage in genuine conversation. I think that’s really changed …

“John Howard was quite ready to try to advance his argument, but he was not frightened of going on the 7.30 Report …

“Now, and this goes back to Kevin Rudd, Brendan Nelson and beyond, we’ve really got people who simply seem to be going through the motions so they can say they’ve been there, rather than any attempt to use as an opportunity for engagement.”

Candour, Middleton says, is in relatively short supply these days.

On the other hand, all those Crikey spoke to were able to recite dozens of highly “gladiatorial” political interviews from yesteryear, many of them involving Kerry O’Brien himself.

And the trend is going the other way too, says Jill Singer, who spent decades doing political news both at the commercial networks and the ABC. “I don’t think political interviews are necessarily becoming more gladiatorial,” she said. “It’s a very hard thing to measure, and no one has comprehensively done it.

“In a sense, there are more soft ‘humanising’ political interviews now, thanks to the rise of breakfast TV news [and] shows such as The Project, and of course Kitchen Cabinet.”

Tough interviewing certainly helps the marketing, Singer adds. The ABC wants key hosts, like Leigh Sales, to look tough on politicians, and will play up those aspects in promotions.

The whole atmosphere around the reporting of political interviews might give the impression there’s more adversarial interviewing than there is. As this morning’s reaction to the Lisa Wilkinson/Clive Palmer interview shows, other outlets will lap up conflict when writing up an interview. You don’t even need to get the marketing department involved.

I reckon “news” is more about the politics and egos of the prima donna media hacks, using their positions to edit and present it.

I would place Mike Willesee (from his current affairs show on Nine years ago), Laurie Oakes & Kerry O’Brien high on the list of premium political interviewers – none are gladiatorial.

Perhaps that’s because their focus is/was on their subject rather than presenting themselves as the star performer.

Wilkinson is just another hack, whose journalism credentials are mundane to say the least.

Her aggro toward Palmer was amateurish, and clearly ratings orientated.

Sales is another lack lustre hack, whose interviewing style appears to be driven via her earpiece.

Proving that I don’t judge interviewers by their genitalia, Australia’s el primo live segment interviewer is Sarah Ferguson, who deftly manages to pin the talent down with facts, not sensationalism. Her dismantling of the very capable Christopher Pyne’s media disposition on the 7.30 Report a while back, was masterful. At the interview’s end, Pyne looked like a rabbit confronted by a cobra…and Ferguson had done nothing more than refuse to accept his talking points.

Hi Klewso. You might be interested to know Jill did give me some comments about how some pollies got off lighter than others. I felt they didn’t fit the flow of the story.