War on punctuation. The government has announced that its biannual party of red tape reduction is no more, with assistant minister for productivity Peter Hendy saying that most of the work has already been done in repealing laws with unnecessary red tape. Labor finance spokesman Tony Burke used the announcement to send out a press release saying that hyphens and semi-colons have been given a reprieve:

“On the first Repeal Day, the Defence Act 1904, which related to the definition of naval officers and state navies, was repealed.

The states haven’t had navies since 1913, but just in case Queensland or Western Australia got any ideas, this Government was on to them.

Owners of mules and bullocks were also given a reprieve, with the repeal of laws requiring the animals be registered for military purposes.

The Government has also claimed red tape reductions in the updating of spelling, grammar and punctuation on the statute books.

Such pressing updates include changing the word ‘e-mail’ to ’email’ and ‘facsimile’ to ‘fax’ across numerous pieces of legislation.

In a series of Statute Law Revision bills, the Government removed 40 hyphens, one comma and one inverted comma; changed two full stops to semi-colons, one semi-colon to a full stop; and inserted two commas, one full stop, one colon and one hyphen.”

So now the war against red tape is over, we hope the red tape that goes with it is also done.

Coming down the stairs. The ABC held its annual Canberra showcase last night, filling Parliament House with its best and brightest, giving pollies the chance to mingle with the famous faces and voices of the national broadcaster. While the likes of Fran Kelly, Myf Warhurst and Mark Scott were there to give pollies a brush with fame, the real stars of the night were the Bananas in Pyjamas, with many MPs uploading their pics with the children’s television icons. 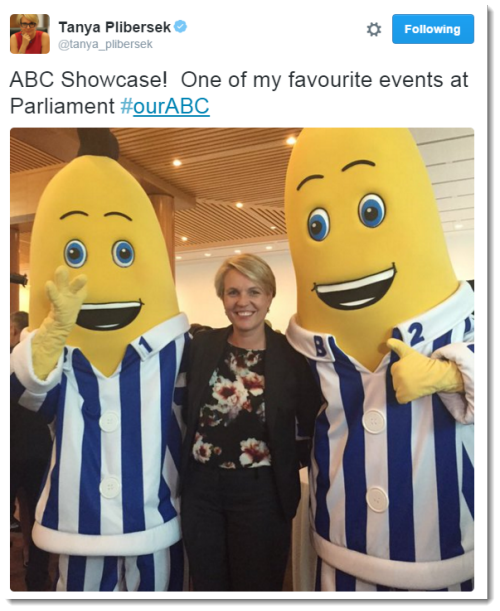 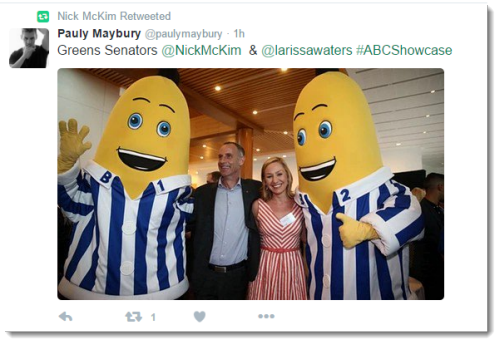 And it wasn’t even Tuesday, but it looks like Anthony Albanese and Annabel Crabb were caught unawares by this banana: 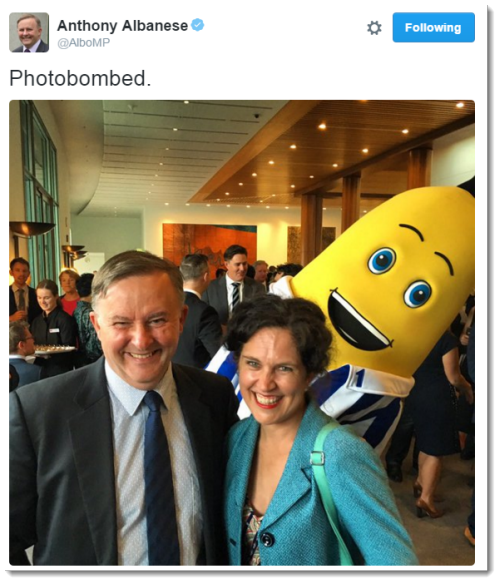 The lobbying drinks for Commercial Radio Australia were also in Canberra last night, but Hamish and Andy, Alan Jones and the like weren’t brought out to impress the MPs. Ms Tips hears that the cocktail event came a definite second to the ABC event, and the most famous face there was MC Ray Hadley (we wonder if he found that bible for Scott Morrison?). The attendees were mostly government ministers, who Hadley encouraged to mingle with the execs in the room — but that just can’t compete with Aunty’s stars.

“Dear Members of the Alliance —

After a lengthy process of engaging with the Department of Health, the Alliance learnt late yesterday afternoon that it was not successful in its application for ongoing funding within the Department’s Peak Health and Advisory Body program.

This decision is a disappointing one for the only National Health organisation working across the LGBTI health sector, as the grant enabled a far greater cohesion of issues across a diverse range of policy areas where we would otherwise be working in only those projects that we are funded to deliver. It enabled members to engage in a national policy space where they would not have otherwise been able to and it is of deep concern that we now need to look at a reduction in our ability to engage on issues that are not part of funded projects.

The Alliance made a commitment to ensure that all staff roles would be continued at their current level to the end of the 15-16 Financial Year with the view and advice from the Department and the Health Minister that other funding opportunities would be established in 2016 as a part of the consolidation of Health’s Flexible Funds. The Alliance and its team will continue to work on seeking new funding sources to continue its important work in the national policy health space.

I thank you for your ongoing commitment to working for the health and wellbeing of LGBTI people throughout Australia.”

Crikey understands that it had been expected that the government would move away from core funding to project funding in grants, and the Alliance was $87,297 in deficit at the end of the last financial year. Watch this space.

Ten-hut! The militarisation of the Immigration Department and its new name Border Force has already led to events like Operation Fortitude, where officers were supposed to be stopping people in the streets asking for their papers. We heard from a tipster that this pattern had continued, with employees required to salute Border Force senior officers at level EL1 and above — but, after enquiries, Border Force quashed the rumour. Now we worry we’ve given them ideas.

Hold the front page. The Labor Herald sent out its weekly newsletter to supporters last night, promising the “weekly news round-up of the latest news in Australian politics”. But the biggest story of the day, and the week, was ignored — no mention of the High Court case that ruled that it is legal for the Australian government to keep asylum seekers on Nauru. Maybe the news is limited then.

You said what? Yesterday in the Senate, independent Senator Jacqui Lambie railed against the government’s proposed changes to pathology services funding, arguing that the changes would force pathologists to start charging for Pap smears — or smap smears, as she called them, but she got it right the first time: 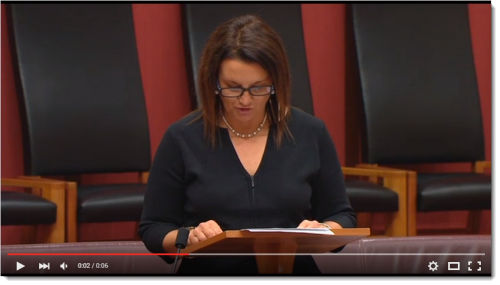 Play it again, Sam. And at The Sydney Morning Herald this morning, a story so good they wrote it twice:

Ahhh “Peter Hendy”? Remember Children Overboard and his part in that classic piece of political mendacity?

Who actually came up with the name, Border Force?
Sounds a bit silly and over the top.

Anyone notice how much B1 and B2 look like Turnbull?

[email protected] – probably the same martinet moron who thought that it would supa-keen to give them black SS type uniforms & insignia.
They’ve already given out $3M in active service medals, for exemplary service abusing on water matters presumably.