Australia's most expensive paper just got more expensive. And other media tidbits of the day.

The only mention of the price rise was on page 2 of Monday’s paper, without any justification, and exempting subscribers. The paper now costs more than an espresso or standard-sized flat white or latte at my local coffee shop. — Glenn Dyer

Fox’s Saudi prince sells out. A year to the day after all but selling out of his stake in News Corp, Saudi Prince Alwaleed Bin Talal Bin Abdulaziz Alsaud has surprised with the sale of 25% of his holding of B-class voting shares in the Murdoch clan’s main company, 21st Century Fox.

In a filing with the US Securities and Exchange Commission this morning our time, Fox revealed that the Prince had sold 13 million B-class shares, cutting his stake to 4.98% from 6.6%, which was the second-largest holding in Fox after the Murdoch clan’s 39.1%. But the new, smaller holding puts him third behind the US hedge fund investor ValueAct, which has around 5.9% of the B-class voting shares.

No reason was given for the Prince’s sale, but in the past month, his shareholding in Fox, and indirectly in Fox News, has become a source of controversy in the US presidential campaign, with conservatives questioning his involvement because he is a Saudi Muslim. Donald Trump pointed out the involvement of the Prince in Fox and Fox News last week when he was fighting with Fox over participating in last week’s Republican candidates debate.

“Most people don’t know that the co-owner of Fox News is Prince Al-Waleed of Saudi Arabia here with his sister and with host Mygan [sic] Kelly,” Trump tweeted.

The SEC filing don’t show when the shares were sold. The reduction of the size of the stake of 4.98% is also intriguing because it is below the 5% level that is generally assumed in the US to allow the shareholder some influence over the affairs of a company (especially as they are the key B-class voting shares). Certainly it seems an attempt to reduce the impact of the claims of Arab involvement and influence on Fox and Fox News.

ValueAct and its principal, Jeffrey Ubben, seems to be more acceptable. No one has questioned his shareholding in Fox or the fact that he was taken onto the Fox board.

While Al Waleed’s sale looks like an attempt to reduce his profile in Fox, there could be another reason for the sale — the SEC filing came a year to the day after the Prince’s sale of most of his holding in the other Murdoch clan company, News Corp, was revealed. His investment firm, Kingdom Holdings (which holds the Fox stake), announced to the Saudi stock exchange that it had cut its ownership in News Corp from 6.6% (or 13 million shares) to about 1% (around 2 million shares), netting some US$190 million  Like in Fox, Al Waleed had the second-largest holding of voting stock in News Corp after the Murdoch family.

He supported the Murdochs during the UK phone-hacking scandal by backing the family’s continued running of the company at company meetings. He also strongly supported the split of the Murdoch empire in 2013 into Fox and the new News Corp and held 6.6% of both companies, making him the second biggest holding of voting shares in the empire, after the family. But the Murdoch’s control of News came perilously close to being overturned as the Prince firstly abstained in 2014, and then wasn’t around to support the clan at the 2015 annual meeting last November. A year ago Al Waleed said in his statement said that the Fox investment “constitutes a solid foundation for our long standing relationship that we expect will endure”. It seems to be no longer such an enduring relationship. — Glenn Dyer

Live news battle gets dirty. Yesterday, hundreds of Australian Twitter users chortled at a penis joke at the expense of News 24 (read the strap below), but the mirth didn’t last long. 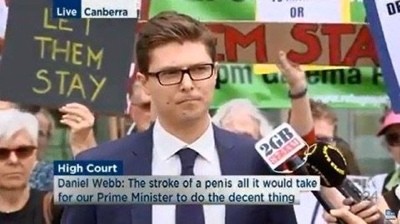 By 3pm, the ABC was telling anyone who’d listen that the strap had been digitally altered (note the larger-than-usual space after the offending word), and that what aired actually did have a space between the ‘pen’ and ‘is’. 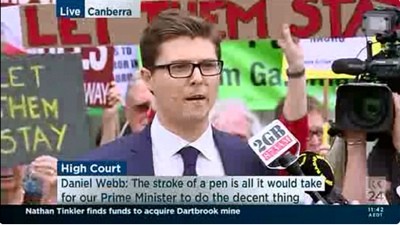 The most popular Tweeter of the image, earning hundreds of retweets, was News Corp’s Peter van Onselen, who also spends hours every day talking live on Sky News. Sky News is ABC News 24’s only real competitor in live rolling TV news. Do we smell a conspiracy? Who knows? We’re just pointing out the facts. — Myriam Robin

How Kerry O’Brien got rejected by News Corp . The fourth season of Julia Zamiro’s Home Delivery kicked off on the ABC last night, and first to show the host around his childhood haunts was Kerry O’Brien, most recently of Four Corners.

The veteran ABC reporter and six-time Walkley winner’s comments on gladiatorial interviewing, the superficiality of TV journalism and the pressures of the job have already been covered. But O’Brien also told of how, upon leaving school, he was rejected from a cadetship at The Courier-Mail. Afterwards, he said, he “ambled around” for three years before Channel Nine offered him a job in 1965.

Later, O’Brien almost became a News Corp journo. After a while at Nine, he was offered a job at The Australian, then a very young paper. But before he could begin, the paper announced its first round of redundancies. As this Sydney Morning Herald profile put it, the “young would-be newspaper reporter had lost his job before he had begun”. Luckily, Nine took him back. — Myriam Robin

Correction: After publication, Crikey was informed News Corp didn’t purchase the Courier-Mail until 1987. The media brief above has been amended to reflect this. 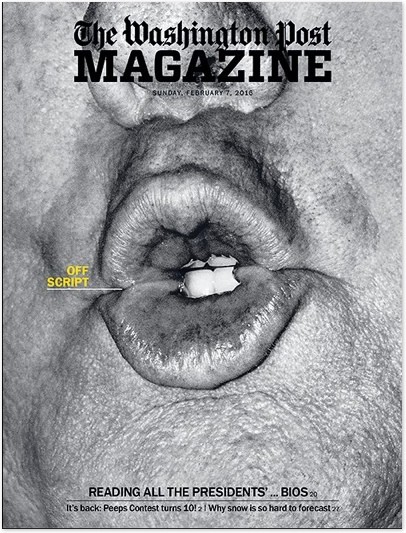 Perhaps someone reminded Al Waleed that lying down with dogs puts one at risk of catching fleas.