Turnbull on the tram. Once again Prime Minister Malcolm Turnbull took to public transport to prove just how normal he is, hopping on a tram while visiting Melbourne last week. Some expected that once Turnbull made himself at home in the Lodge, he wouldn’t be so free to mix with the general public on trams, trains and ferries, but according to Senate documents, Turnbull can keep his Myki and Opal cards topped up. Senator Catryna Bilyk asked the Department of Prime Minister and Cabinet if any “special arrangements” had been made for the PM to use public transport — would they be cleaned before Turnbull touched on? Does he get his own carriage or are the public allowed to sit next to him? In reply, PM&C says no special arrangements are in place for Turnbull to take public transport — so if there’s a pool of vomit in the back of the carriage or a crowd of rowdy schoolkids, our leader is stuck with them like the rest of us. By the look of this photo tweeted by Channel Nine’s Charles Croucher last week, no one cares enough when the PM is on the platform for any special arrangements to be made: 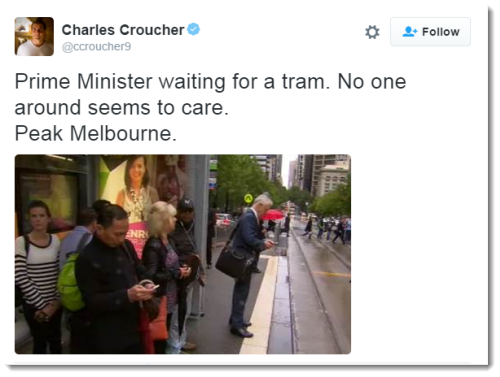 Is Credlin part of Abbott’s package? Does Peta Credlin’s job have a use-by date? Since her boss Tony Abbott was deposed in September, Credlin has stayed on with Abbott, although she commands a much smaller team than before. According to Senate documents, since Abbott is now the former prime minister he has a “package of entitlements” while he remains in Parliament. This includes the ability to employ two additional staff members on top of the normal entitlement of an electorate officer and four staff. The extra staff are “a Senior Advisor for no longer than 12 months and an Assistant Adviser to support him in his role as a former Prime Minister”. Abbott isn’t the only one from the old guard to be allocated extra staff; former leader of the government in the Senate Eric Abetz has been allocated an extra assistant adviser.

Calling Border Force. A group of men that advocates the legalisation of rape and labels themselves “neomasculimist” is due to have meetups in cities around the world on Saturday, including in Australian cities. The outrage engendered in Australia prompted the leader of Return of Kings Daryush Valizadeh to decide he was hopping on a plane to Australia to join the men here and stir up even more controversy. When told he would need a visa and would probably struggle to get one, he said he would arrive by boat (and hasn’t he heard what Australia does with maritime arrivals?), tweeting that the north-west of Australia was a weak point. It’s not often that we compliment Australian Border Force Commander Roman Quaedvlieg, but he this tweet shows the appropriate  concern about Valizadeh’s threats: 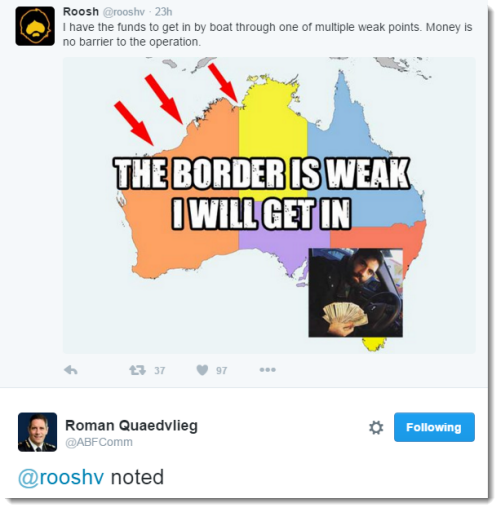 AGNSW drama doubles down. It’s a new year, but the disquiet over management at the Art Gallery of New South Wales continues, we hear from a tipster:

“Schools planning visits this year to the iconic Art Gallery of New South Wales in Sydney’s Domain are in for a shock. They’re being asked to pay.

“After repeated denials and evasions, gallery management came clean this week on the policy change on its official website.

“Volunteer guides who have hosted free school tours since the 1970s are furious. The only free option they are now allowed to offer is a cursory 20-minute introduction. Schools wanting a more thorough guided visit will now be charged for the services of commercially hired ‘artist educators’, starting at $165 an hour for groups of up to 15.

“A school class of 30 will have to pay $330 for an hour’s tour — fine for the wealthy private schools on fat government subsidies, but out of range for many public schools.

“The AGNSW’s recently published annual report revealed a huge blowout in executive salaries, with director Michael Brand on some $450,000 plus expenses and the number of senior executive positions up from two, in former director Edmund Capon’s time, to eight.

“’We’re a passionate bunch when it comes to art and education,’ proclaims the gallery’s website. But only, it seems, if you can pay.”

We asked the gallery if it was correct that schools would now have to pay and were told that while there have been changes to the offering, volunteers aren’t being sidelined:

“It is incorrect that ‘the only free option with a guide is a short introduction to the gallery’.  It is also incorrect that ‘the artist educator tours are new to the gallery’.  The primary school education programs at the Art Gallery of New South Wales are led by either volunteer children’s guides, artist educators or a combination of both.  For many years artist educator and professional educator-led programs were only available to secondary schools visiting the Gallery.  In 2016 these programs are an enhanced offering to primary schools.  All education programs types are being booked heavily by teachers planning their year.”

Lovin’ it. In case you haven’t caught the flood of advertising and product placement warning us that Valentine’s Day is on its way, consider this a friendly reminder. If you’re stuck for ideas to treat your special someone, McDonald’s in Warilla has got you covered with two- and three-course options. Because nothing says romance like a McFlurry: 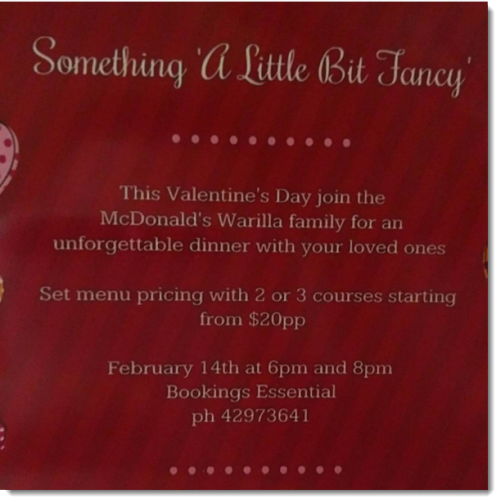 As a Gallery visitor since before W.W. II, I’m not overly worried about the Crikey Commissariat’s disapproval of the 2016 Programmes, in part because I’d hardly see the Commissariat as a meaningful Guardian of ANY of the better aspects of Western Democracies Cultural Heritage.