Mark Latham's got a new column ... in the Tele. And other media tidbits of the day.

Then and now. Yesterday, Mark Latham’s long-awaited column — the one that never made it to The Age — was printed, right opposite Peter Costello’s, in The Daily Telegraph. It’s vintage Latham — an examination of how Labor’s capitulation to inner-city elites on both economic and social policies has hurt the party electorally.

But your correspondent was most intrigued by the thought of Latham appearing in the Tele at all. You see, the Lair of Liverpool has a long history with the paper, and while things look chummy now (the Oz’s media diary informed us on Monday the paper had been after him for years, even when he was at the Fin), they haven’t always been so.

“In Australia, the broken culture manifests itself in the politics of smear. Political targets are chosen and then relentlessly attacked through invented claims and innuendo. Hiding behind a guise of journalistic independence, News Corp functions as a narcissistic propoganda machine, working its way through an enemies list longer than Richard Nixon’s …”

“Bob Brown knew what he was talking about when he called them the ‘hate media’.”

Latham has a long history with the Tele itself.

Former Tele editor David Penberthy on Saturday used his Advertiser column (which is generally critical of Latham’s attacks against Rosie Batty) to rehash some of it:

“A year after exiting politics, Latham was bumming around Campbelltown, in suburban Sydney, living happily on the proceeds of the very parliamentary superannuation scheme he had denounced as a rort.

“The newspaper I was then editing, The Daily Telegraph, sent a photographer to chronicle his taxpayer-funded life on the couch. While a simple ‘Get stuffed’ would have sufficed, Latham tried to attack the photographer, called him a paedophile, stole the camera, drove home, put it in a vice in his shed and smashed it into 21 pieces.

“This same Nikon 150 had returned intact from assignments in Iraq and East Timor but didn’t survive an afternoon in Mark Latham’s shed … When you look at what’s left of that camera, it says more about this guy’s psyche than any newspaper column ever could.”

On that case, Latham said he became angry when his children where photographed, which the magistrate said was understandable and that the photographer was “out of line”. But, the court ruled, that didn’t excuse Latham’s subsequent behaviour; Latham was given a two-year good behaviour bond. The incident took place in 2006, only two years after Latham’s federal election loss, which he, in many forums, blamed on News Corp.

Frankly, it’s all very awkward, and perhaps helps put in context why Latham’s arrangement for a regular column was, at first, with The Age, the inner-city arty paper that it is.

Still, it doesn’t appear the Tele‘s current management is holding a grudge. From Media Diary on Monday:

“The paper believes Latham is one of the most honest, fearless and confronting voices on topics such as poverty, disadvantage, health and education.

The politician turned columnist, the article continued, was “a natural fit for the paper’s audience in western Sydney”. Which is all pretty laughable, given Latham was telling Crikey as recently as 2014 that the Daily Tele‘s concern for Western Sydney “stops at Annandale”, five kilometres or so from the CBD. — Myriam Robin

Turd will only speak to ‘bangable’ reporters. If you enjoy the sight of journalists flagellating themselves, take a look at the tweets of Roosh V, who’s been responding to numerous tweeted requests for interviews with Australian journalists with nothing but abuse and graphic misogyny.

V (not his real name) heads up Return of the Kings, an organisation that advocates “neo-masculinity”, which largely seems to revolve around the legalisation of rape. The group is planning a gathering of supporters on Australia soil, which has prompted a flurry of media interest in recent days. Australian journalists have been doing the usual thing, which is contacting V to request interviews. It really hasn’t been going well. Though that’s entirely to be expected, given this is the contact request form on the group’s website …

Job cuts at Fox. A week out from reporting its December quarter and half-year financials, 21st Century Fox has revealed plans to chop staff and cut costs by a quarter of a billion dollars. The Murdoch clan master company is not looking to make deep cuts, just trim surplus staff (there have been a number of internal operational mergers in cable and TV businesses that have yet to result in surplus jobs being cut).

Fox is the latest of a growing list of broadcast media companies looking to cut costs as they confront rising competition from streaming businesses such as Netflix, weak production schedules or poor ratings. Time Warner, Viacom and ESPN have recently cut hundreds of jobs and close to $1 billion in costs.

“This restructuring is coming at a time when all of our businesses are hitting new heights, which I know may be confusing,” Fox networks CEO Peter Rice wrote in a memo. “It is important, however, that we organize ourselves for tomorrow rather than resting on the laurels of today, and the best time to do that is when we are in a position of strength.”

“I never really consciously went for gotcha moments, but when you did occasionally get one it was, I thought, for the right reasons.”

Front page of the week. All going back to Nauru … 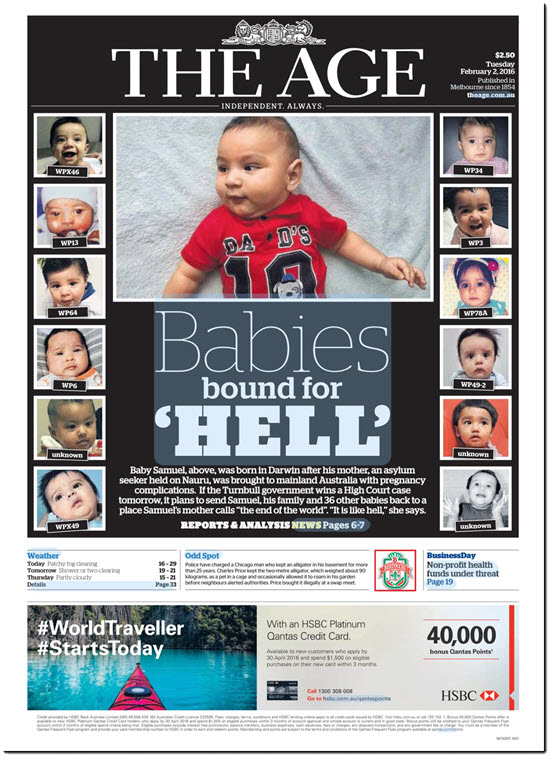 It’s pleasing to find that everything worth evaluating in this article had already been evaluated by Crikey subscribers.

Jesus, Norman, that’s cryptic even by your standards.