Isentia Index: GST or not to GST, that’s still the question

As the first week of parliament for the year continues, the Turnbull government’s talking points were leaked to media before it started, encouraging backbenchers to focus on innovation, jobs and economic growth and including a social media image about union donations to the Labor Party. Prime Minister Malcolm Turnbull hinted to the party room that […]

As the first week of parliament for the year continues, the Turnbull government’s talking points were leaked to media before it started, encouraging backbenchers to focus on innovation, jobs and economic growth and including a social media image about union donations to the Labor Party. Prime Minister Malcolm Turnbull hinted to the party room that he will call the federal election in August, with election day to be in September, and this week told MPs a double dissolution could be a “live option” if the Senate blocks key construction industry watchdog legislation.

Opposition Leader Bill Shorten continues to push for a plebiscite on same-sex marriage, despite some government MPs including Eric Abetz saying they would ignore the public’s wish to legalise it, and announced four new policy measures to protect workers’ rights on Sunday. New South Wales Premier Mike Baird, in fourth place, and South Australia Premier Jay Weatherill, in seventh, both told the ABC’s 7.30 they supported a GST increase to fund health care and education.

Minister for Employment Michaelia Cash, entering our index in eighth place this week, has been criticised for only allowing a member each from the Greens and Labor to view a confidential volume of the royal commission into trade union corruption. Cash said the re-establishment of the Australian Building and Construction Commission is a priority for the first Parliament sitting of the year.

Minister for Immigration Peter Dutton will decide whether to let Roosh Valizadeh into the country, a man who advocates for legal rape on private property and says a woman’s worth is in her fertility and beauty, while a man’s is in his intellect. Valizadeh has told his Twitter audience that our borders are weak in the “north-west region”, and that he doesn’t need a visa if he comes by yacht … meanwhile, the High Court this morning ruled the federal government has power under the constitution to detain people in Australian-funded detention centres at Nauru and Manus Island.

Minister for Health and Sports Sussan Ley announced federal funding to sporting bodies will be given on the condition that male and female athletes have the same travel standards as they compete or attend major international sporting events. 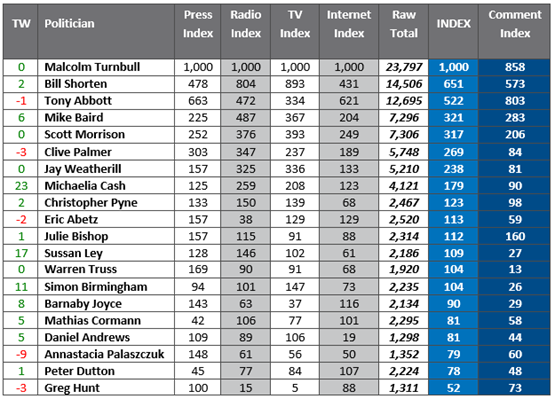 Former PM Tony Abbott is nowhere near his heights of social media comments, but still enough to beat every other politician. Love lingers long a Twitterati.

Tony Abbott’s non-meeting with the US President got some traction on talkback radio, after reports it was a private dinner were corrected to a lunch attended by hundreds of people.

Former ricketer and former controversial charity-runner Shane Warne was announced as part of the line-up for Channel 10’s I’m a Celebrity, Get Me Out of Here, denying reports of a $2 million pay cheque. The Shane Warne Foundation announced last week that it would cease operations.

Minister for Employment Michaelia Cash’s finesse in granting both Labor and Green (only one rep each and not to tell anyone anything) access to “confidential volume of the royal commission into trade union corruption” surely warrants acknowledgment?

Is this not the time to ‘terminate’ Minister Dutton’s tenure, and on the back of his disastrous launch of his blackshirts Border Force, reward Cash with a highly desirable ‘Blonde in Black’ uniform?