Prime ministerial parade tease. It was an interesting spectacle at Midsumma’s LGBTI Pride March in Melbourne on Sunday. Up until yesterday morning, the Liberals were set to be far back in the order for the march, somewhere around the 144th spot in the parade. Miraculously however, the Liberals were suddenly moved up to spot No. 3, coinciding with a rumour spread on the ground that the Prime Minister Malcolm Turnbull was set to make an appearance and march in the parade.

Despite Turnbull’s office insisting before the event that he wouldn’t be there, the rumour persisted. At one point a journalist even told Opposition Leader Bill Shorten during his press conference at the parade that the Prime Minister was there. From the transcript:

“JOURNALIST: Mr Shorten, the Prime Minister has answered your call and just rocked up.

SHORTEN: Well there you go, that’s fantastic, good-o  and lets have the vote this week, this month — let’s not spend $160 million of taxpayers’ money. Let’s actually let the MPs get on and do their day job.”

Given the increasing divide in his party over the issue of holding an expensive plebiscite on same-sex marriage, it is not that surprising that Turnbull was nowhere to be seen. Liberals, including Small Business Minister Kelly O’Dwyer,  did end up marching third in the parade behind two groups including Shorten, Victorian Premier Daniel Andrews, Greens leader Richard Di Natale and Melbourne MP Adam Bandt.

Can’t see the truth for the trees. The controversial culling of 100-year-old fig trees along Anzac Parade in Sydney is attracting not just the ire of environmentalists who oppose the loss of the trees, but also police officers who have been deployed to guard the work cutting down the trees, day and night. A tipster approached one of the police officers last week, and the cop agreed that the loss of the trees was unfortunate. “It’s pretty bad, isn’t it? Wait until you see what’s coming, it’s not over yet.” What isn’t over yet? Hundreds of trees will be cut down to make way for the new light rail, but the NSW government has been cagey with locals who have asked exactly which trees will have to go. Is this a game of smoke and mirrors?

I’m a charity, get me out of here. Channel Ten kicked off the ratings season last night with the first episode of I’m a Celebrity, Get Me out of Here, a reality TV offering in which the word “celebrity” is loosely applied to a group of people sent to live in the jungle. The show’s big drawcard will arrive on screens tonight, however — the one and only Shane Warne. The champion cricketer has been emboiled in a new controversy in recent weeks over the conduct of his charity the Shane Warne Foundation.

Before hopping on a plane to the jungle, Warne announced that his eponymous foundation would be closing down, and that operations had already ceased. But the show is based on the premise that the winning celebrity will donate their $100,000 prize money to the charity of their choice. The  charities are already listed on the website and both Warne and former footballer Brendan Fevola say that if they win, they’ll be donating the cash to the now defunct kids’ charity:

Even if Warne doesn’t win the competition, appearing on the program will still be a win for his bank balance. The Herald Sun is reporting that he has a “gentleman’s agreement” with Channel Ten worth $60,000 for every day he spends in the jungle. If he makes it to the end of the show he could end up with up to $3 million.

Spotted. A tipster in Melbourne tells us they saw this bromance blossoming on Friday morning:

“Bizarrely saw Paul Howes and Michael Kroger laughing their heads off and chatting away outside the KPMG offices in Melbourne — that’s a strange relationship.”

The fight for a dollar. With the Iowa caucuses beginning today in the US, candidates from both parties are ramping up their push for donations, but none are quite so insistent as Republican Ted Cruz. In a series of emails, tweeted by Jason Wilson, Cruz sounds increasingly like he is asking for a ransom, not a donation: 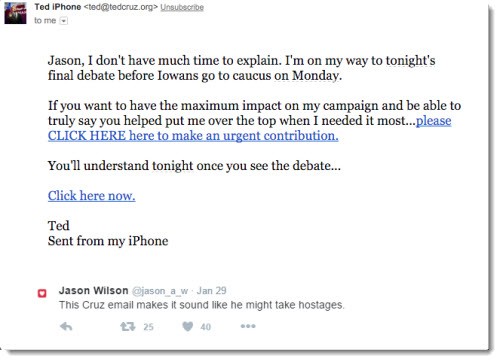 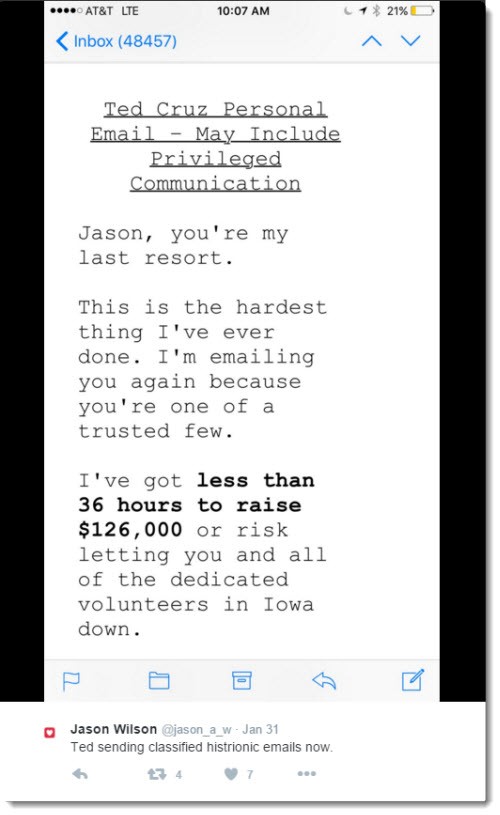 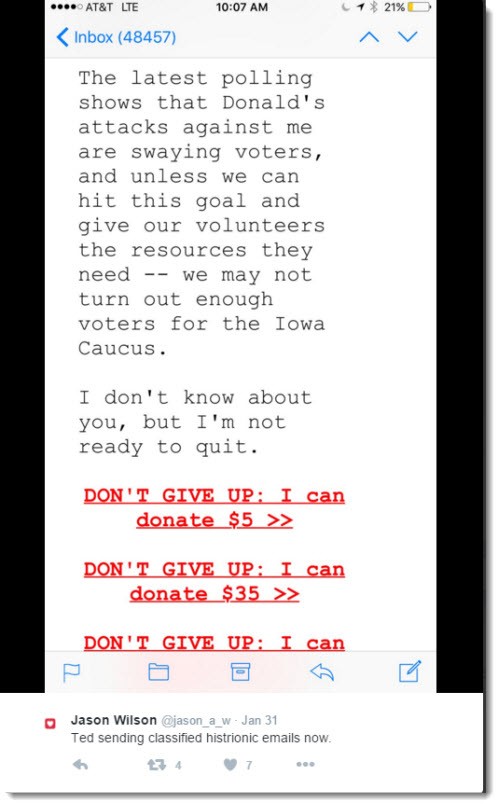 No wine for Pyne. The Australian reported today that Christopher Pyne is assisting the Australian Federal Police with their inquiries over the alleged illegal copying of Peter Slipper’s diary, along with Mal Brough and Wyatt Roy. While he may feel like a drink to take the edge off as he returns to Parliament, Pyne will have to abstain this month as he takes part in Febfast. The Innovation Minister will have to stick to it, too — less than a day in and he’s already reached his donation target of $400.

I could see the argument for a Dead Poets; Society, but one for an Almost Dead Trees Society doesn’t (even by Crikey’s abysmal standards) would appear to be a severe case of barking (mad) up the wrong tree, wouldn’t it.