Media briefs: Scientologists on Scientology … The Parrot donates to Libs … News UK back on top …

The Church of Scientology has released a "media guide". And other media tidbits of the day.

Scientologists launch new media strategy. No, Scientologists don’t believe people are descended from aliens, and if you’ve got any other questions, they’re here to help.

At least, that’s what an email sent to journos across Australia’s largest media organisations on Friday afternoon said. The Australian Church of Scientology, as it has in the past, emailed journos a “Media Guide to Scientology”, which outlines the church’s history, beliefs, and charitable work, while telling journos that the organisation “values dialogue”.

“We also appreciate balance in any stories about Scientology, especially when purported rumours become ‘fact’ because of a missed opportunity to respond. We are available for comment at any time for fact checking and this can be either by phone or email — our contact details are listed below.

“We are always very happy to answer questions and debunk the often ludicrous allegations that circulate but invariably, have no factual basis.”

Scientology has been the subject of intense media interest in recent years, partly due to the public claims of abuse and intense control made by some of its former adherents, as well as controversy over whether it is entitled to its not-for-profit religious status. Also earning the distaste of many parts of the media has been the Church of Scientology’s willingness to use the courts to sue for defamation.

The Scientology media guide doesn’t make direct rebuttals to much of this criticism. But it does refer to it, if obliquely. It’s last page has a section on “media controversy”, the guide states “Scientologists work to protect and maintain freedom of speech world over”.

“That being said, the Church’s view of the press is in accord with that held by the general public, who, by survey, find press reportage inaccurate, biased and too often shaped by special interests.

“Now and again, less than responsible journalists have wilfully misinformed the public about Scientology. As a new religion, there has been mystery, misunderstanding and a share of controversy that invariably accompanies the new and the different. This is not unique to Scientology. But to spin a sensational tale and so fuel religious bigotry is unconscionable”.

The church, the guide states, has met with the editors of major media organisations to discuss its concerns.

On aliens, in case you were curious, the guide says a belief in descent from aliens, the details of which critics of the church say are revealed only to very senior Scientologists, is “simply not true”.

“Some of the information one finds on the internet regarding Scientology religious beliefs is a mixture of misstatements, distortions and outright lies designed to twist Scientology theology. These scurrilous statements, issued by the ‘internet fringe’, are not only patently untrue, they are intentionally designed to ridicule Scientologists and denigrate their actual religious beliefs.”

The guide also goes through the reasoning behind Scientology’s objection to psychology (because its tests are subjective and “often influenced by the pharmaceutical industry”) and the justifications for why the church “disconnects” from those deemed antagonistic or “suppressive” to Scientology (because a right to choose not to communicate with someone is “one of the most fundamental rights of every individual”). — Myriam Robin

Jones, Seven donate to the Libs. Before his recent battles against the government over coal seam gas projects, today’s annual donation dump by the AEC revealed that 2GB talkback host Alan Jones’ production company Belford Productions donated $15,000 to the Liberal Party in December 2014.

Jones’ ties to the Liberals do run back a lifetime. Jones had tried and failed to win state seats for the Liberals twice, and failed to win preselection a number of times, including in the seat of the now-prime minister Malcolm Turnbull. Given Jones’ lengthy and public meltdown when Turnbull took the leadership of the Liberal Party in September last year, it will be interesting to see if he makes any donations this financial year in the lead-up to the election.

Other donations from the media came from Seven West Group, which donated $12,950 to the Liberals between February and May 2015. — Josh Taylor and Myriam Robin

Q&A is live nationally once more. The ABC’s Q&A appears to have bowed to criticism from those outside the Eastern States, who’ve complained about not being able to view Q&A live on News 24, as the ABC’s Lateline would air in the slot, leaving viewers to watch Q&A on ABC 1, which airs shows according to local time-zones and not at the same time nationally. This hampered the ability of some viewers to participate in the live conversation through tweets and the like.

But this year, Q&A, now part of the News Division, will be simulcast on News 24, which means it’ll air at 9pm in SA, 8.30pm in Queensland, 8pm in the NT and 6.30pm in WA. “As a result of the change, on Monday nights viewers in those states will no longer see Lateline on News 24,” a release from the ABC states. “They can catch the program in its later timeslot on ABC TV.” — Myriam Robin

Normal transmission resumes. UK Chancellor, George Osborne, and Prime Minister, David Cameron, were the star turns at Rupert’s Christmas party in London in December, along with a number of other cabinet members. It was another overt sign that the Murdoch clan is back in the saddle in Britain and the phone-hacking scandal at the News of the World is, well, an unfortunate example of old news.

Rupert Murdoch’s raised visibility in UK tells us normal service has been resumed, especially where Conservative politics meets rampant self-interest. The re-hiring last September of Rebekah Brooks as CEO of News’ UK operations several months after she was acquitted over phone-hacking charges was the first public sign that the Murdochs had regained their nerve and their standing with the UK Conservative establishment.

Then came the announcement in the Times in London of 84 year old Rupert’s engagement to the 59 year old actor, Jerry Hall. That could have been announced in the Murdoch newspapers in US or in Australia, but Murdoch chose to make it in his most successful newspaper, The Times, which has moved back into profit. The announcement was made in London even though the 84 year old geezer lives in New York. Ms Hall is based in London.

Now James Murdoch – the Murdoch who was in charge of the UK when the hacking became an issue and quit and fled the UK for a corner office on 6th Avenue in Manhattan – is back in London, returning as chairman of Sky, the 39.6% owned associate of the clan’s 21st Century Fox. His return generated a lot of hot air in London at the weekend about what it could mean, but the bottom line is that no one knows what it means, except the sons and dad who shows more signs of ageing by the week.

Dad redistributed responsibilities last year — Lachlan was made co-executive chair of Fox and co-chair of News. James was made CEO of Fox. Now James is back at Sky as chair and completely rehabilitated. Fox reports its December quarter results a week tomorrow morning, Sydney time, from the US and James Murdoch will be centre stage. On Friday morning, Sydney time, News Corp produces its December quarter figures, and there won’t be a Murdoch in sight at the briefing unless Rupert or Lachlan (the co-chairs) makes an unexpected appearance. — Glenn Dyer

Front page of the day. Goodbye summer, it’s been a blast … 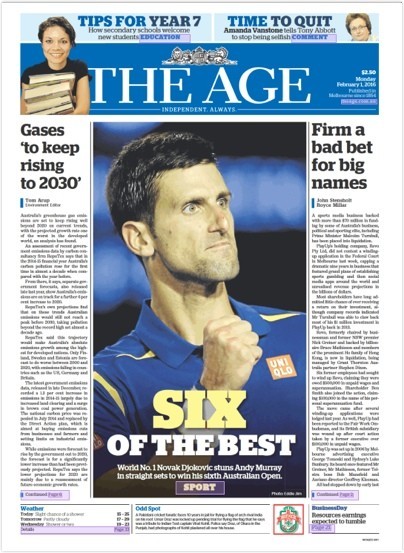 As has been pointed out many times, Scientology didn’t become a ‘religion’ until long after its beginnings when they decided to seek the cover of religion to protect their activities from the Law. In Australia we had ‘religions’ such as The House of David, but none ever made it the art form Scientology did.

Living in the NT, I’d love Radio “National” to be truly national (never watched Q&A, and not only because I don’t have a tv).
I don’t just mean getting rid of the inner-Sydney mentality, but actually playing live programs live. When there’s big news being covered live on The World Today or PM, it’d be great not to hear the breathless updates 1 ½ hours late, when the latest (local) news bulletin has just provided more up to date coverage, not to mention the internet …