Battle of Wills. It’s getting to the pointy end of the Labor preselection for the seat of Wills and all signs point towards dirt being thrown in one direction — towards Peter Khalil, supported by Opposition Leader Bill Shorten and seen as the leader in the race. A pamphlet sent to Labor members in the electorate yesterday detailed his role as director of national security policy for the Coalition Provisional Authority in Iraq in 2003, and quoted his views on the Israel/Palestine conflict. Featuring a picture of Khalil on a background of dripping blood, the brochure is entitled “The Truth”, but no one has owned up to being the distributor of the sheet.

While the dirt sheet on Khalil has focused on his work in the Iraq war, little attention has been paid by his rivals to his more recent employment history. Until mid-last year Khalil was the corporate affairs director at SBS. One of the organisation’s biggest fish, who frequently represented the broadcaster in Senate estimates and the like, Khalil left the organisation quietly after SBS’ ad averaging push failed in July 2015. He’d been one of its biggest proponents, but it was shot down in the Senate, with the Labor Party voting against it.

The battle to take over from Labor stalwart Kelvin Thomson has been mired in accusations of backroom deals between factional heavies, but there are some connections that haven’t been as obvious. Also working in the corporate affairs team at SBS under Khalil was Katerina Theophanous, daughter of former Victorian MP Theo Theophanous. While Khalil has no shortage of  people in his corner — including Shorten and David Feeney — we understand that Theophanous Senior’s influence has been important for Khalil. While it was expected that factional bosses would bring in the numbers for Mehmet Tillem, we hear that his lack of outreach to members has put many offside in the electorate.

“We are the friends of the ABC, but real friends, who wish for the best for the ABC … but also demand that it lives up to the ABC Charter, and exposes abuses of power and rights, and the reduction of our freedoms. The words of renowned Australian journalist John Pilger are relevant here: “It is not enough for journalists to see themselves as mere messengers without understanding the hidden agenda of the message and the myths that surround them.”

The group demands “proper reporting” of the “hostage crisis” on Manus and Nauru, of indigenous affairs, of East Timor and West Papua, and of climate change.

“We ask for democratisation of the ABC. Why are letters to the ABC not answered? Where is Australia Talks Back? Where is Perspective? Were is the ABC’s connection to civil society and its many environmental and anti-war groups?”

The group also supports more conventional causes, such as a restoration of the ABC’s funding, safeguards against political interference, and a lack of advertising.

Indi so excited. Can you feel the excitement? It’s been more than four months since Malcolm Turnbull became the most excitable Prime Minister we’ve ever had, and the more he says “it’s never been a more exciting time to be an Australian”, the more we wonder if we might burst with excitement. But Turnbull and the Liberals don’t have a monopoly on excitement, and in Victoria’s North East, there is about to be an excitement battle between the candidates. Marty Corboy, the Nationals candidate taking on both popular independent Cathy McGowan and and former Liberal MP Sophie Mirabella, is spruiking the Nationals revamped regional development policy with the line “It is an exciting time to be a regional Australian where we are poised to take advantage of the opportunities of the future” featuring in multiple releases. Mirabella and McGowan are yet to get on the excitement train, but surely it’s only a matter of time.

Getting techy. While 2013 was seen as the Twitter election, many news organisations are seeing 2016 as the year for more live video to reach audiences on their phones instead of on their TVs. The ABC’s new US correspondent Zoe Daniel has been mixing it up, by live streaming rallies from US presidential candidates in Iowa. The function, which means that Daniels’ videos pop up in users’ newsfeeds without them having to search for her profile or that of the ABC, gives an insight into what we can expect from Australian journos in the lead up to our own poll later this year. 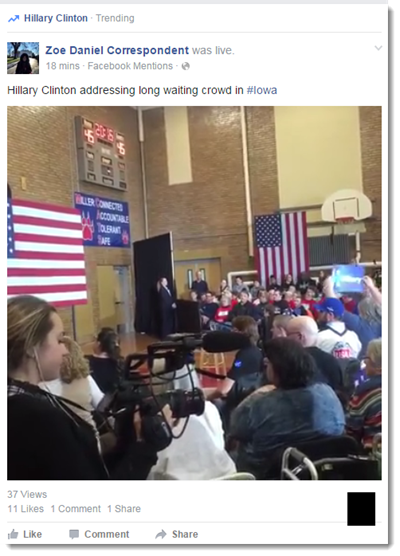 Indi so excited … This is the one to watch. Is there ANYONE who wants to see the appalling Sophie back in parliament, laying waste to all about her?

It’s interesting to find Crikey suggesting it’s somehow improper for opponents to point out Khalil’s views on the Israel/Palestine conflict. I can accept their fear most Australian Citizens don’t share their prejudices on that issue, but we’re not yet in a Soviet style Government are we. It’s a tad hypocritical of course for Crikey, welcoming home to any anonymous sniping ratbag, to criticise others about that subject.
That they think in terms of their own prejudices is shown by the complaint the material didn’t mention his job as the corporate affairs director at SBS. They genuinely don’t seem to understand how far their prejudices are from the views of Australian Citizens.
On another topic, those of us who knew how the first bogus Friend of the ABC was established can have a quiet chuckle about the conflict now taking place to find out who can be deemed the ‘purest’ Defender of the Faith.

LeeT – Sophie?
Ms Tips – I’m not sure that accurate details of his Iraq involvement is a dirt sheet on Khalil.
I think that his more recent activities at SBS are a cause for concern, another careerist in Parliament, just what we (don’t) need.
BTW, did you really mean “the most excitable Prime Minister”? he usually seems to have been munching on Mogadon sandwiches.

AR – Mirabella. I think I spelt that right. Or Crikey and I are both wrong, which I guess is not impossible (-: