Media briefs: money’s not that good … all your shares are belong to us … seeing double …

Another red-letter exclusive that isn't. And other media tidbits of the day.

The money’s not that good. Firstly, a correction. Yesterday Crikey published an article on Channel Seven spoiling the Nine/News Corp exclusive on the Mitchell Pearce saga. We wrote that News Corp’s Daily Telegraph paid $40,000 for the footage, a figure we now realise was rather overstated.

We’re now told News Corp paid a four-figure sum well under $10,000 for the footage. It’s worth noting that News Corp’s rights to the video were second-publication rights, hence why it uploaded its video at 7.30pm while Nine’s A Current Affair aired the story at 7pm. This should have tipped us off to the fact that News Corp was unlikely to pay more than Nine for the footage.

For what it’s worth, the SMH ran an article yesterday also stating the $40,000 figure, which reporter Andrew Webster later wrote had been suggested by the Roosters. Crikey had a separate source for our claim, but it seems ours was labouring under the same misapprehension. Fairfax’s article also stated it paid a small sum for use of the video, which it didn’t reveal. — Myriam Robin

Exclusive watch. The preselection for Wills is getting nasty, with a four-page “dirt sheet” on front-runner Peter Khalil being distributed to Labor members in the seat. So says the Oz in a red-letter exclusive this morning … 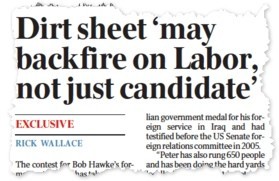 Mind you, it’s not the only one with the story. This from this morning’s Age …

While Ten boasted that it lifted its revenue share by 13% to $359.7 million, it was from a low base and a near death experience that only ended when it was bailed out by Foxtel and the Murdoch clan taking virtual control of the broadcaster. Seeing there was a small, 1.7% fall in the half year in overall revenues, Nine and Seven gave up revenue to Ten. The three commercial networks are fighting over a contracting pool of money.

The $1.97 billion for total ad revenues for the three networks in metro and regional markets for the six months to December 2015 was the lowest in six years. Since 2007, only the GFC-hit years of 2008 and 2009 saw lower figures for the July-December period (the sector’s peak ad revenue period because of Christmas and most of the ratings season falls in the period). — Glenn Dyer

Seeing double. Speaking of television, here was Mark Day’s column as it appeared in the Oz’s media section this Monday, January 25 … 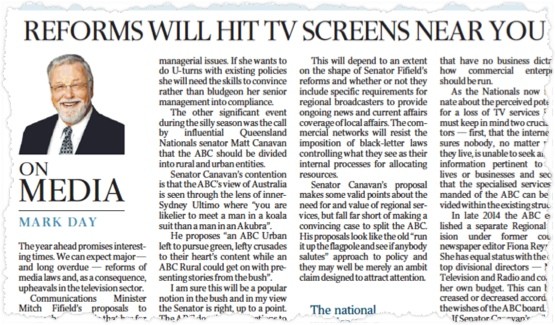 And here’s the exact same column, as it appeared on January 18 … 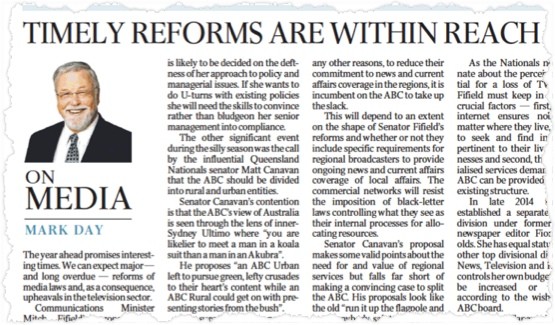 UK paper downturn continues. The owners of the Daily Mail have blinked and the cost of the Monday-to-Friday daily paper is set to rise 8% to 65 pence, from 60 pence, starting next Monday, February 1, in the first price rise for the paper in three years. The price rise comes as the Daily Mail and General Trust (DMGT) reported that the right-leaning Mail and its Sunday paper were hit hard by the downturn in UK advertising (as was the Mail’s intellectual opponent, the left-leaning Guardian). And the company says conditions haven’t improved in January with revenues continuing to slide in print. — Glenn Dyer

All your shares are belong to Mashable. Yesterday at the Melbourne Press Club, three of Australia’s most dominant digital invaders (The Guardian, BuzzFeed and Mashable) talked about how they’d found a niche in Australia.

Perhaps one of the most interesting things revealed was from Mashable‘s Jenni Ryall, who described the way the global tech site uses a tool called Velocity to predict how many shares articles published across the Australian web are likely to earn.

“I can tell that a story someone wrote on The Age can get 5000 shares. I might want to jump on that story, get my own angle,” Ryall told the room. “We’ve got predictive tools that make it a lot easier for us. It makes us very lean.” 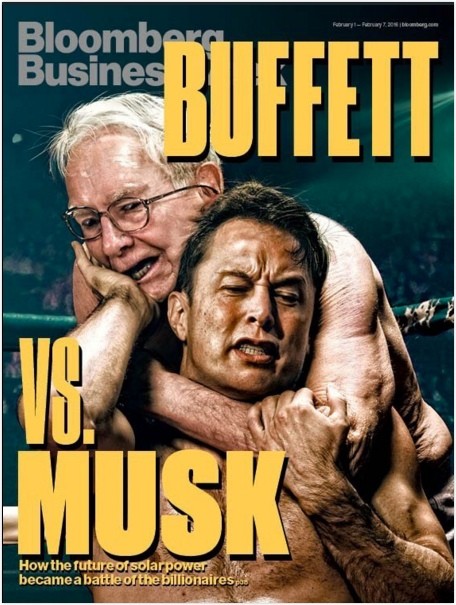