Craig Kelly is falskt. Sydney Liberal MP Craig Kelly has drawn the ire of the Swedish media, over comments he made about wind turbines in the Scandinavian country. In a Facebook post last week, Kelly wrote “human stupidity knows no limits”, before having a go at some frozen wind turbines that had to be defrosted by a helicopter. According to Kelly:

“The aviation fuel, the diesel for the truck, and the oil burned to heat the water, could produce more electricity (at the right time to meet demand) than the unfrozen wind turbine could ever produce. (Before it freezes up again).” 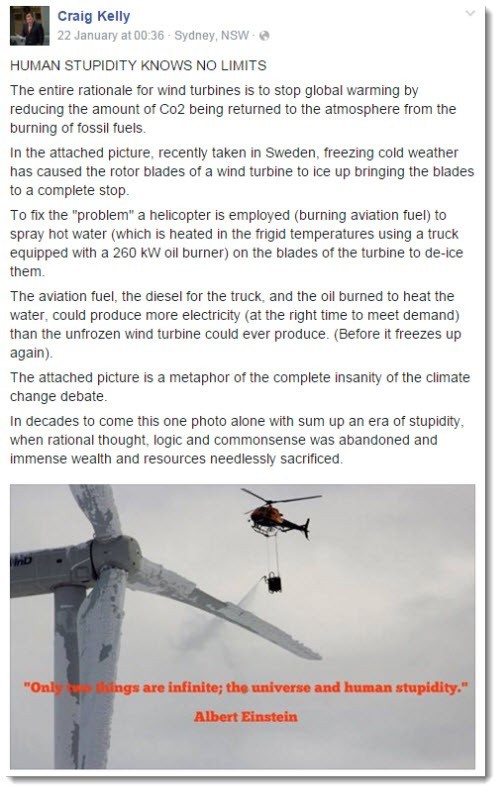 According to Swedish news website Metro (translated here), however, it’s still better for the environment to use the wind turbines and unfreeze them when necessary. Lars Andersson, head of the Wind Power Unit at the Swedish Energy Agency, labelled Kelly’s claim “rather absurd”, and that power companies weigh up the benefits of defrosting the turbines before using the helicopters. One thing the article didn’t cover is how unlikely it would be for Australian wind turbines to require defrosting in such a way. 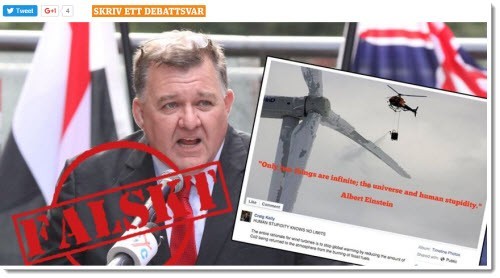 The column is dead, long live the column. Ms Tips is a huge supporter of gossip columns, and so it was with great sadness that she learned that The Australian‘s Margin Call business goss column is on its last legs. Her understanding is that Will Glasgow’s new business column in The Australian will be its replacement. It’s due to start as soon as The Australian Financial Review lets him go from its own Rear Window column. Presumably, Margin Call’s Ben Butler and Christine Lacy will move on to other duties within the Oz business section.

‘Inappropriate’ for cyber security centre to talk about cyber security. ABC’s 7:30 program this week reported that notorious spy software FinFisher had been found on a proxy server in the Global Switch data centre in Sydney, and was allegedly being used by Indonesian government agencies. You would think this would be the perfect case for the Australian Cyber Security Centre, set up by the government in November 2014 to investigate so-called cyber threats, to weigh in on. Sadly not. After taking more than a day to respond to a request for comment, Crikey was told that no questions on the use of FinFisher would be answered, and it would be “inappropriate” for ACSC to comment on the ABC’s report.

Here we go again. We never get tired of bad news about our $18 billion flying heap of crap, the F-35 — which is a good thing because the bad news never stops. The latest: one of the purported advantages of the F-35 is its heavy reliance on software, and it will fly (assuming its engines don’t catch fire) with millions more lines of code than any other military aircraft. Naturally that makes it vulnerable both to ordinary software bugs and to cyber threats. According to a Pentagon official in documents obtained by Jane’s, the F-35’s manufacturer, Lockheed, “continues to struggle in development with … a complex architecture with likely (but largely untested) cyber deficiencies,” and that proper testing of the plane’s deficiencies might cause further delays (the plane is already seven years behind schedule). Perhaps the Pentagon can ask the Chinese, who are alleged to have stolen the plane’s blueprints in 2009, to help expedite the testing.

What do you mean? While an increasing number of conservative senators have revealed that a same-sex marriage plebiscite was really just a stalling tactic that they plan to ignore anyway, the subs at The Sydney Morning Herald were getting confused. It looks like they were deciding between writing “gay marriage” and “same sex marriage” and ended up with “gay sex marriage”, which probably reveals what the senators really have a problem with.

It seems the Crikey Commissariat doesn’t understand the difference between plebiscites & referenda and/or it’s being deliberately obtuse to mislead readers.

I was going to say, re ‘gay sex marriage’ that PC had finally disappeared up its own cloaca.
But i didn’t, coz that might be indelicate.

‘We never get tired of bad news about our $18 billion flying heap of crap, the F-35’

How do we know that cost overruns are not used as a cover for diverting funding to black projects?
https://en.wikipedia.org/wiki/Black_project

Isn’t Craig Kelly the same guy whose re-election campaign centred around spreading (ultimately) vexacious claims about his eminently more intelligent and credentialed Labor competitor? And, much to the shame of the voters of the electorate, to be returned as the sitting member? Is this the same idiot we’re reading about here?

colin skene, why don’t you spell out precisely WHAT statements you believe were untrue? In the meantime, your vague comments certainly don’t cause objective readers to simply accept your prejudices about the “intelligence” of any candidate, do they.