We knew Sky News liked to do things cheaply, but we didn't expect this.

Pyne v Marles. We knew Sky News liked to do things cheaply, but we didn’t expect this.

Premiering February 6 (at 8.30am), Sky News will air a new live panel show hosted by minister Christopher Pyne and shadow minister Richard Marles. They’ll host alone, with no impartial host to crimp their style. Neither politician, the release states, will be paid, which really makes it perfect for Sky, who are always keen to keep a lid on costs — the budget for the program is presumably virtually nothing beyond a producer and studio time.

Angelos Frangopoulos, Sky’s CEO, described the program as “an innovative way of looking at the big issues of the week, through the eyes of two senior politicians”. “It’s their program and their call on the discussions that they see shaping the national debate.”

If any politician can pull a show like that off, we think it’s probably Pyne. — Myriam Robin

Trump v Fox News. For no rhyme or reason, except the bombast of Donald Trump, Fox News is now the flag bearer of journalistic independence and integrity (yes, I know, that is very unusual). Fox has refused to bow to Trump’s demand that journalist Megyn Kelly be removed from the up-coming debate between the top eight Republican candidates. Trump threatened not to appear on the debate, and then said he would not attend when Fox refused to buckle to his demand.

Kelly is a no-nonsense TV reporter who had the temerity to ask some tough questions of Trump in the first debate months ago (this argument has rumbled on since the middle of last year between the candidate and the Murdoch-owned network).

In an unusual appearance on Kelly’s Fox show, leftist filmmaker Michael Moore said she had “done something that Jeb Bush, Chris Christie, [Marco] Rubio, [Ted] Cruz, none of them have been able to do … which is to essentially frighten him, make him run, shut him down. Everybody has been trying to do this for months. But you did it.”

The Financial Times points out that while Fox News is taking a justifiable stand on the issue in its argument with Trump, it has not done anyone any harm:

“With an audience that skews heavily Republican — about 60 per cent of its viewers are self-described conservatives, according to a 2012 survey by the Pew Research Centre — it would have once been unthinkable that a candidate could win the GOP presidential nomination while waging a feud with the network.

“But in a campaign that has upended conventional wisdom, normal rules no longer apply. The spat — dating back to August — does not seem to be hurting the Trump campaign — or Fox News itself, which has scored bumper ratings with its coverage of the primary race.”

Keeping the bastards honest. It’s unclear how much attention the Australian public pays to the ABC’s Fact Check, but an analysis of its first three years by Pontyer has found one group who definitely is paying close attention: politicians.

Suicide report too detailed: Press Council. The Press Council has issued a finding against the Pakenham Gazette after ruling an article on the suicide of a 15-year-old invaded the family’s privacy.

The article relied on an interview with the step-mother of the teen. But, the Press Council ruled, “the reporting of the circumstances of the suicide in the degree of detail that was included amounted to an unreasonable intrusion on his mother’s reasonable expectation of privacy”.

“The level of detail specifically relating to the suicide and the lack of consultation has understandably contributed to the distress of the young man’s mother, grandmother and other family members.”

Reporting on suicide required informed consent before publication, the Press Council stated, which ordinarily “would require both parents or legal guardians to be contacted”.

Video of the day. What American outlets are calling the “most Australian interview ever” … 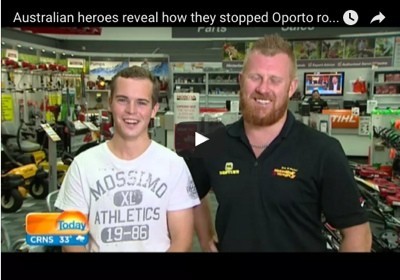 Congratulations to the Today Show for airing some honest TV. This is reality TV, folks, not contrived scenarios with house renovators, The Bachelor, Big Brother et al.

Candid characters, unscripted, no agenda & – that absolute rarity – nothing to flog. Although, bearing it mind it’s commercial TV, the big fella James managed a couple of impromptu plugs.

Possibly the most entertaining thing we’ll see on commercial TV in 2016. A pity it’s peaked so early.

And again I am forced to ask, why is there no Green representation on that pollies-only show? Systemic partisan unfairness.