It's been a battle of patriotic wills and political ambition this week, as Australia Day brought up the idea of a republic again.

Prime Minister Malcolm Turnbull spent his first night in The Lodge on Saturday, the first PM to do so since Kevin Rudd after years of renovations that reportedly cost $9 million. Turnbull announced retired army chief David Morrison as the 2016 Australian of the Year on Monday night. Morrison received global coverage after a speech calling on soldiers who could not accept women in the military to “get out” racked up nearly 2 million views on YouTube. Morrison said he would focus on Australia becoming a republic, to which Turnbull said there are more urgent issues confronting the country, despite every state leader — with the exception of WA Premier Colin Barnett — signing a declaration calling for an Australian head of state.

Former PM Tony Abbott — back up into second place this week – has been criticised for another controversial speaking gig in the United States, addressing a conservative Christian lobby group, and announced he would re-contest his New South Wales seat of Warringah in the upcoming election. Former Employment Minister Eric Abetz, entering the top 20 in seventh place, said “Tony Abbott is absolutely no Kevin Rudd”, and once again called for him to be in the ministry.

Businessman Dick Smith says he will stand against former Speaker Bronwyn Bishop in the next election, while Innovation Minister Christopher Pyne and SA Premier Jay Weatherill have supported legalising same-sex marriage following the death of a British traveller in South Australia, who did not have his marriage recognised on his death certificate. NSW Health Minister Jillian Skinner, entering the index in 14th place, announced a security audit for hospitals after a near-fatal emergency department shooting. 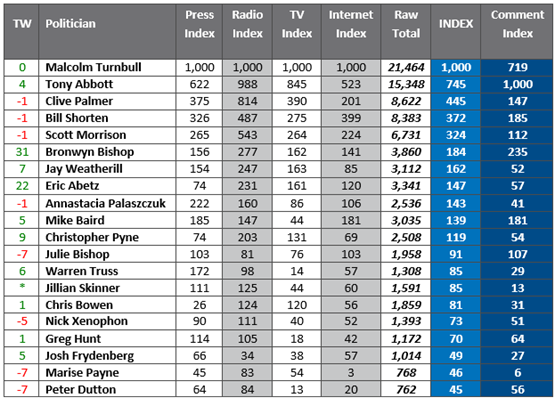 Social media jumped onto Tony Abbott’s announcement he would re-contest his seat, and speak at a religious group’s event in the US, with double the mentions over current PM Malcolm Turnbull.

Former army chief David Morrison is our Australian of the Year for 2016, and says he will focus on domestic violence, diversity, the gender pay gap, and the republican movement over the next year. Does anyone else want to see him on The Verdict against Mark Latham, or is that just me?