The government has overwhelmingly favoured Coalition electorates in its program to improve mobile coverage in regional and remote areas of Australia.

One of the Coalition’s 2013 election promises was for $100 million in funding for telecommunications companies to improve mobile phone reception across Australia, aiming to fill gaps in coverage, particularly around town centres and roadways. After seeking public comment and taking proposals from the three network operators in June last year, then-communications minister Malcolm Turnbull announced funding for almost 500 new or upgraded sites across Australia, consisting of 429 Telstra base stations, and 70 Vodafone stations.

At the time, Turnbull said that the locations were chosen based on a “competitive selection process” with Telstra and Vodafone nominating sites they would like to build or upgrade aligning with the thousands of requests for improved coverage taken from the public.

MPs were also invited to nominate up to three priority locations in their electorate for towers, too, but only those MPs where less than 50% of their electorate is defined as a “major urban centre” with 100,000 people or more living there, or an area designated as “inner metropolitan”.

According to information provided by the Department of Communications in response to questions from the last round of Senate estimates hearings, there were 75 eligible electorates under this definition, and, in total, the close-to 500 towers to be built or upgraded using federal funding were in 57 electorates across the country.

The document reveals that of the 57 electorates to receive funding, 30 are held by Liberal MPs, while 14 are held by Nationals MPs, 10 are held by Labor MPs, with the remaining three held by independents. 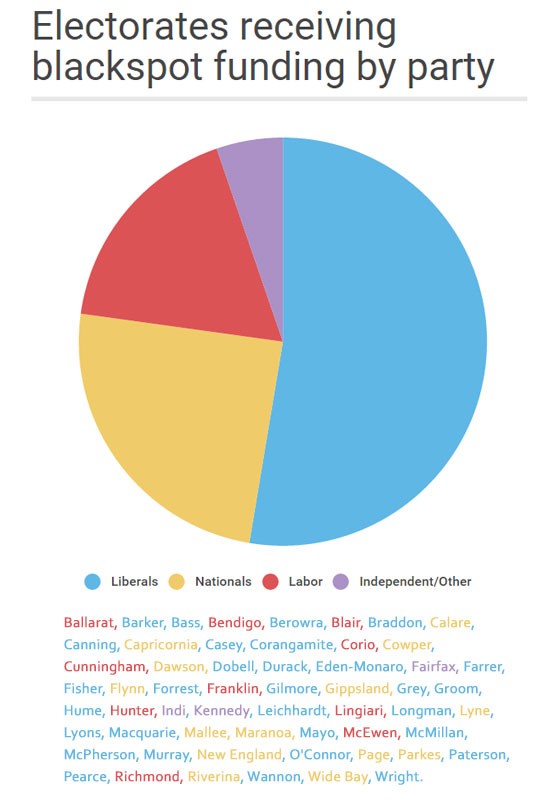 Two regional marginal electorates held by independents — Cathy McGowan in Indi, and Clive Palmer in Fairfax — were also included on the list. A Galaxy Poll earlier this week suggested Palmer would lose his seat to the LNP at the next election, while McGowan is being challenged by the former member for Indi, Sophie Mirabella, at the next election.

A spokesperson for Communications Minister Mitch Fifield said that “empty claims of political bias” had no supporting evidence, with the ratio of electorates receiving funding “broadly consistent” with the spread of Coalition and Labor seats in regional and remote electorates.

Some Labor electorates would also benefit from towers not directly in their electorate, the spokesperson said.

“For example, the Labor electorate of Gorton did not receive funding, but 10 of the 12 black spots nominated in Gorton will receive coverage from base stations in neighbouring electorates. This is the case in both Coalition and Labor-held electorates,” she said.

The decision on which towers were ultimately funded was made by the then-communications minister Turnbull, the spokesperson said, but the approved list was identical to the ranked list provided to Turnbull by the Department of Communications.

In September last year, Labor’s then-shadow assistant minister for communications Michelle Rowland asked the Australian National Audit Office to investigate why just 7% of the towers were in Labor electorates, while over 80% were in Coalition electorates. The ANAO is now conducting a review into the effectiveness of the Department of Communications’ assessment and selection of tower locations in the first round of funding, and is due to report to government in winter this year.

Labor has been critical of the government for offering to Coalition MPs secret “electorate briefings” on the NBN rollout in their respective electorates, but not offering the same briefings to Labor MPs. In a response to a question on notice this week, the Department of Communications said Fifield would be “happy” to brief any MPs from any party who want to know about the NBN rollout in their electorate.

A second round of the mobile blackspots program was announced last year, with another $60 million in funding allocated for the second phase.

I recall an Abbott comment about not wanting to fund lifestyle choices for those that live in the bush.

Does that not apply to mobile phone coverage?

The electorate of Calare has an area‎ of ‎30,526 km2, bigger than Belgium, and I have never have Vodafone outside the regional cities.

“Is the Coalition pork barrelling in rural electorates?”
Is the Pope a Catholic?

It was smart of you to add a question mark to your headline because even you know the thrust of the article is complete rubbish.

The bush is mostly conservative. Therefore efforts to improve mobile phone coverage in the bush will mostly occur in Coalition held electorates and Tanya Plibersek’s seat misses out. Give her a comforting hug for me will you? This is not pork barrelling if you stepped out of your inner urban bunker in Fitzroy and had a look.

The “bush” is mostly angry at the Coalition government allowing mining and CSG to poison their electorates and are likely to be looking “greenward” for representation. Pork barrelling is exactly what it is.