For someone whose company scored an $800 million tax win over a lazy Australian Tax Office a few years ago, and whose company the tax office revealed was atop its watch-list of local companies, Rupert Murdoch was being pretty cheeky in taking the UK government to task over its 138 million pound (nearly A$300 million) tax deal with Google. Murdoch took to Twitter to voice complaints and make some (now usual) outrageous claims. 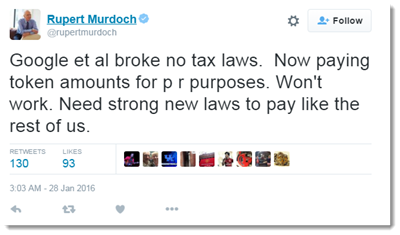 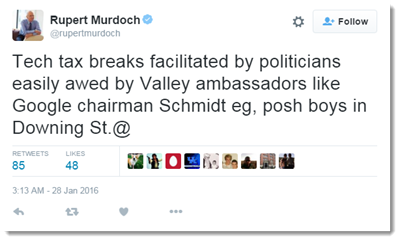 That’s a bit rich coming from Murdoch after the disclosure last month that his minions had met multiple times with Cameron government ministers, especially Chancellor of the Exchequer George Osborne and PM David Cameron. As rt.com reported:

“Executives from Rupert Murdoch’s News Corporation met with government ministers 10 times in the year leading up to March 2015, with the media mogul personally attending eight of those meetings.

“The execs held three meetings with Chancellor George Osborne, three with then-Culture Secretary Sajid Javid and two with then-Education Secretary Michael Gove, according to an analysis of ministerial meetings published by the Media Reform Coalition on Tuesday.

“‘Far more than any other media group, News Corporation executives met with government ministers,’ the coalition wrote in a blog.”

Besides running up against the taxman in Australia, Murdoch and News Corp have had similar troubles in the UK. The Economist reported in 1999 that News Corp had paid tax of around 6% over the four previous years, and no net tax at all in the UK on 1.4 billion pounds in profits made since 1987.

Murdoch should include his own players among the media “posh boys” seen at Downing Street. 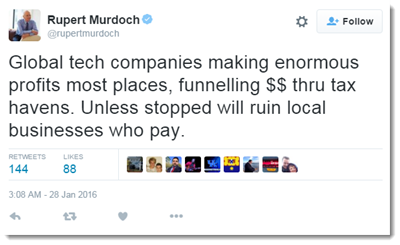 Bloomberg reported this morning that Murdoch’s “company has 23 tax haven subsidiaries, according to a 2015 report by Citizens For Tax Justice, including three in the Cayman Islands, six in Hong Kong and four in Luxembourg”.

But it should be pointed out that consistency in arguments has never been a strong suit of Murdoch’s. Same goes for his sons and their newspapers; they cut the facts to fit their side of any argument or lobbying push. 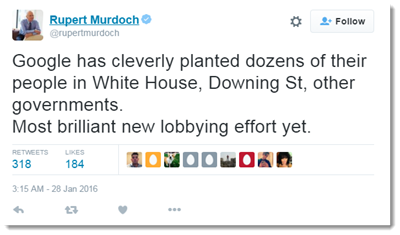 But what about former News Corp people who ended up in government? Former News of the World editor Andy Coulson comes to mind. Coulson resigned from News to become Prime Minister David Cameron’s chief flack before the phone-hacking scandal brought him down. As usual with the Murdochs, it’s “one rule for us” and nothing for anyone else.

How about a Rupert tweet on Sir Rod’s surprise gong?

The Crikey Commissariat accusing anothert Capitalist Media Company of hypocrisy. Are you trying for a comedy Oscar?

Well done Glenn what a hypocrite and a very jealous person. How dare other companies have superior tactics to him Those plants will get the sack in coming weeks

This is laughable but I can’t.

Am now trying to visualise Murdoch attempting to thread a camel through the eye of a needle.

Zut – that old saw made me see, horribly, the exact reverse on his marital bed.