Briggs speaks. Disgraced ex-cities minister Jamie Briggs has broken his silence over the incident in a Hong Kong bar that left him out of a ministerial job, blaming alcohol and time away from home for kissing a female staffer on the cheek (or neck) and telling her she had piercing eyes. In an exclusive interview with his local paper, the Mount Barker Courier, Briggs and his wife, Estee, say that media coverage of the issue was “ridiculously over the top”. 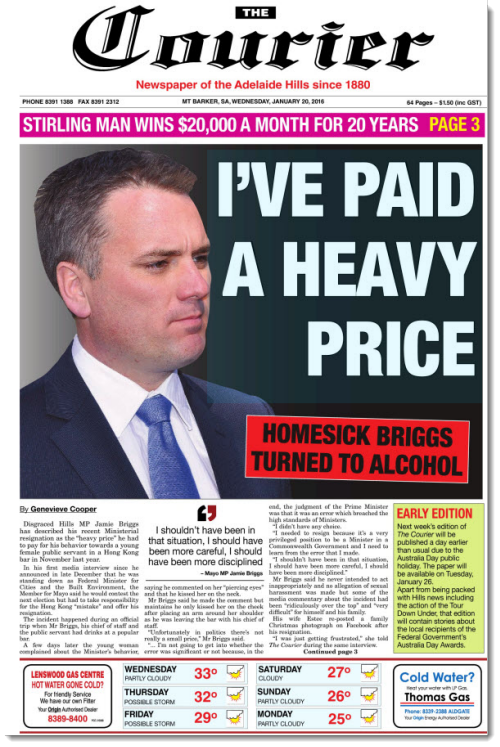 In last week’s edition of the Courier, Briggs said that he had paid a heavy price for his behaviour in Hong Kong in November last year, and that he had to take responsibility for the “mistake” he had made.

“Unfortunately in politics there’s not really a small price ….

“I’m not going to get into whether the error was significant or not because, in the end, the judgment of the Prime Minister was that it was an error which breached the high standards of Ministers.

“I didn’t have any choice.

“I needed to resign because it’s a very privileged position to be a Minister in a Commonwealth Government and I need to learn from the error that I made.

Briggs also said that Prime Minister Malcolm Turnbull had given him hope of a return to cabinet:  “I still think I’ve got a lot to contribute.” The readers of the Courier aren’t so keen, and the editorial, headlined “Kiss of Death“, notes that while Briggs is keen to run again, his seat is under threat from a Nick Xenophon Team candidate, and warns him not to take the safe seat for granted.

MITA and guns. The MITA immigration detention centre in Broadmeadows has recently installed a gun safe at its entrance, a move that has surprised asylum seeker advocates. The safe and the device next to it for safely loading and unloading firearms are not for use by Border Force officials, but for Victoria Police, Border Force told Crikey. While Border Force maintained that the device had been at the centre for quite some time, Pamela Curr from the Asylum Seeker Resource Centre told Crikey that it was a relatively new addition. 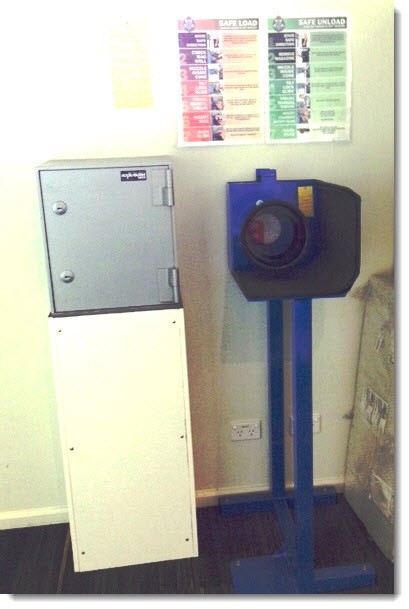 Turnbull and Realism. The Labor Party candidate for the seat of Wentworth has launched a blistering attack on the art world and on his political rival Prime Minsiter Malcolm Turnbull, in a post on art website The Art Newspaper yesterday. Hughes, son of Sydney gallery owner Ray Hughes, wrote about the decision to close his father’s gallery, that the art world has “been taken over by dickheads” and this anecdote about a young Malcolm Turnbull:

“I will be running for office this year at the forthcoming Federal election for the Australian Labor Party in the blue-ribbon, harbourside Sydney electorate of Wentworth. The seat is currently held by the most popular conservative prime minister in recent Australian history, Malcolm Turnbull, whose family I have sold paintings to. In the 1990s, when Malcolm was still a merchant banker, the Turnbull family commissioned one of my father’s artists, Lewis Miller, to paint a portrait of Malcolm. Unhappy with the work, Turnbull confronted my father at a function and exclaimed: ‘That artist of yours is no good; he’s made me look like a big, fat, greedy cunt’, to which my father replied, ‘He is a realist painter, you know’.”

Celebrate what’s great. Our politicians all have their own way of celebrating Australia Day. George Christensen used the day to tell us that our national anthem’s second verse isn’t actually about sharing our boundless plains with those who’ve come across the seas, but for keeping our enemies out: 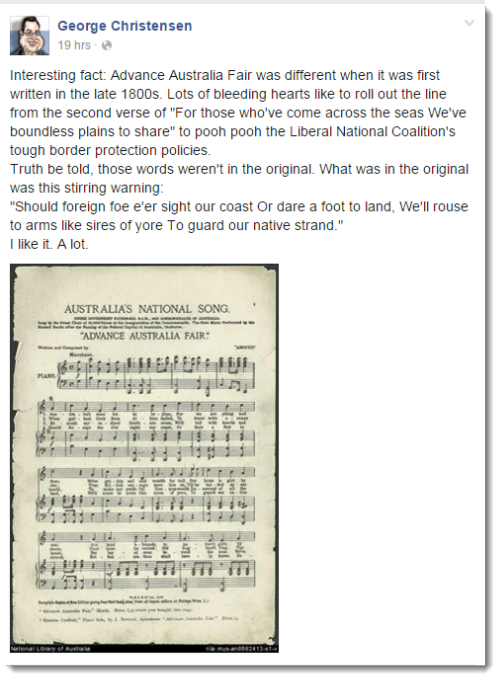 Tasmanian Senator Jacqui Lambie showed us the Australian flag could be worn as a sequinned top and said we should all say the Oath of Allegiance — except instead she said the Citizen’s Pledge, which is recited by new citizens of Australia: 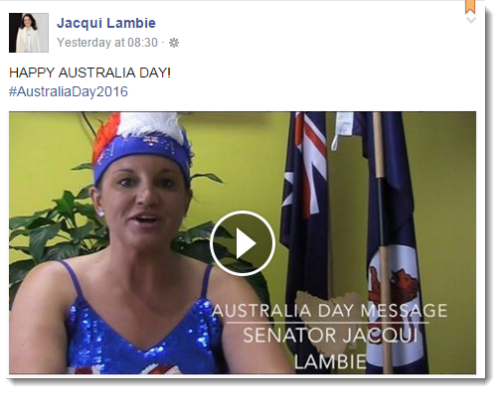 The best Australia Day advice comes from Queensland Senator James McGrath, who is keen on cuddles and says “things are about to get as exciting as a frog in a sock” (the Queensland version of “never been a more exciting time …”?). We also love the idea of “Bill Shorten Memorial Lettuce”: 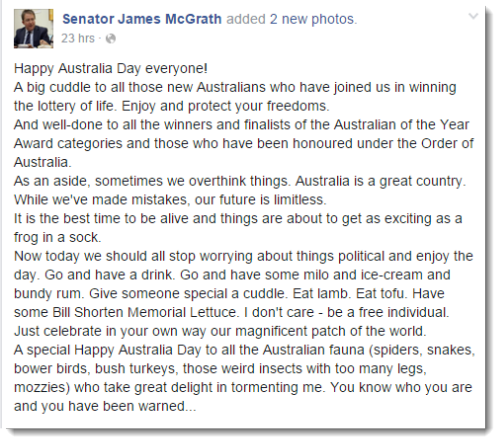 … and what’s not. They do things a little differently on the central coast of NSW, where the local paper has reported on Australia Day celebration that seem to show an indigenous Australian put in the stocks: 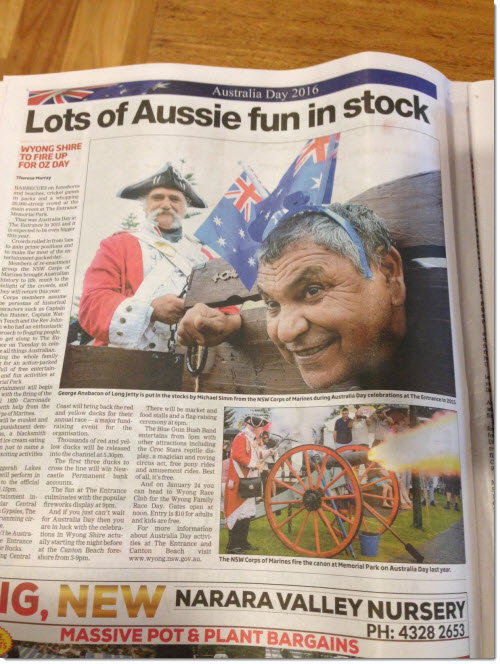 George Christensen is quoting an ancient version of Advance Australia Fair. That verse was omitted in the 1901 Federation version, when it was replaced by what is now the second verse. But a National being over a century behind the times is nothing unusual. Most of them are still back in the 12th century.

Poor Jamie Briggs, he was so homesick he had to get pissed and try to get it on with a staffer. At least now he can drink in the privacy of his own home and get it it on with his wife. Some people just shouldn’t be allowed out.

Was Briggs homesick when he got pissed and danced on Abbott’s office coffee table and did his leg in?

Or is he just much too fond of a drink or ten?

He’s not even looking at the right verse.
The original line that is now ‘for those who’ve come…” etc was “for loyal sons across the seas” – it’s even visible in his photo

Crikey certainly knows how to commemorate Australia Day with its usual trivia, doesn’t it.