How the New York Daily News Became Twitter’s Tabloid. And other media tidbits of the day.

It’s aboot revenue. It’s been a rough start to 2016 for the Canadian media: two daily newspapers closed; another confirms it is switching to an all-tablet life; and hundreds of jobs lost at the country’s biggest media group, on top of more than 110 going in newspapers (in the closures). The Canadian media is an even bigger basket case than other media in major English-speaking markets such as Australia, the UK and US.

The two Canadian dailies closing are little-known outside where they circulate: the Guelph Mercury in Ontario and the Nanaimo Daily News on Vancouver Island. Both announced on Monday that they will publish their final newsprint issues on Friday. The decisions were driven by falling sales and ad revenues. The Mercury’s ultimate owner, the giant Torstar Corporation, said it could no longer justify the cost of publication — now 26 full- and part-time jobs will be lost. The number of jobs lost in the other closure is not known. The Mercury had been in existence since 1867, the Daily News for 141 years. An online version of the Mercury will continue, as will the twice-weekly Guelph Tribune.

Last week, Canada’s largest newspaper chain, Postmedia Network, said it would sack 90 staff (most of them journalists). And earlier this month, the Montreal-based paper La Presse stopped printing analogue weekday editions in favour of a digital edition on a tablet. The largest job losses in the current round were announced on Monday by Rogers Communications, the country’s largest media group. Rogers said it would be cutting 200 jobs in TV, radio, publishing and administration. — Glenn Dyer

“Last year, the Daily News’ longtime owner, Mortimer Zuckerman, shopped the paper around but by August gave up, unable to find an acceptable buyer for it. And there were more layoffs … Its charismatic editor Colin Myler left, to be replaced by his deputy, [James] Rich. He doubled down on Myler’s emphasis, in the last few years, of publishing to the new digital beat: faster, more national, and increasingly fueled by a certain populist partisan glee.

“The latest and most visible manifestation of that new strategic direction is a reinvention of the paper’s “wood” — newsman-speak for page one — for an era of hyperpartisan social sharing. Just as tabloid covers used to amuse, inform, and outrage passersby on the sidewalk, enticing them to pick them up and read all about it, the Daily News has arguably been the most aggressive and successful newspaper brand at turning the old-school institution of a front page into an  irresistibly “like”-able image on Facebook — at least for people who don’t care for the right-wing politics of the New York Post.”

Front page of the day. Influential conservative magazine the National Review has turned on Donald Trump. The New Republic has already accused it of hypocrisy over its stance: 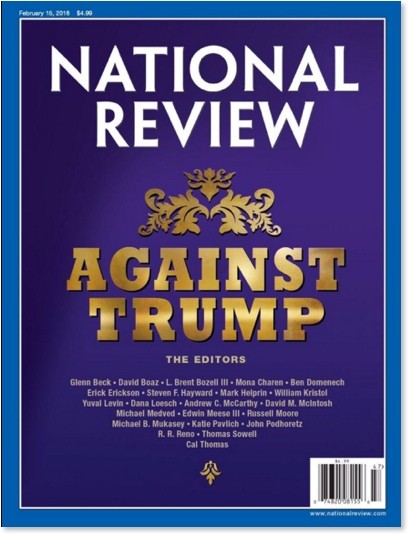 Front page of the day: ‘His hands were empty’