All the way with the IPA. The Institute for Public Affairs, known for its valuable and objective research, is quoted in the Herald Sun today saying that Australia is fine just as it is, and that we don’t need to change at all. According to deputy executive director and wannabe senator James Patterson:

We’d love to see new polling on what Australians think of our flag, national anthem, and whether or not we should be sorry for the atrocities that happened in our country’s short history. The problem is, the IPA’s poll of 1003 people, conducted by Research Now earlier this month, didn’t ask about any of those things. The questions it did ask and the results are here. Asking people if they agree with the statement “I am proud to be an Australian”, “Australia Day is a day for celebration” and “Do you think Australia is better or worse than other countries?” gives insight into the patriotism of Australians and their views on Australia Day, but not on the flag or the anthem.

Joke’s on you. The United Patriots Front, one of the major groups behind protests against mosques in various towns and cities across Australia, was left red-faced yesterday when it posted a link to an article claiming that Islamic groups and Aboriginal groups had designed a flag that represents “Australian minorities first, white Australians second”. This of course got the blood boiling at UPF HQ, where they posted a link to the article with the caption “You’ll have to kill us first 🙂 Good luck!” 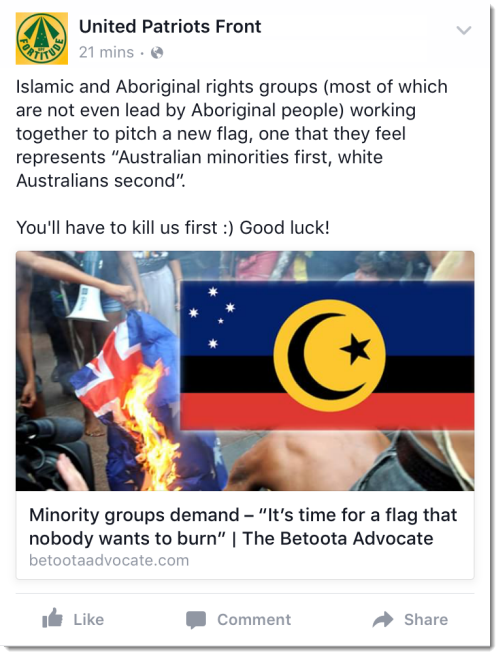 The article however, comes from Australian satirical news website The Betoota Advocate, which is written in a similar style to The Onion. The UPF isn’t the first group to get caught my the site; Media Watch has pointed out when Nine’s Today show also struggled to spot the joke. The post has now been removed from the UPF Facebook page, after repeated comments warning that the site was not actually a news source.

Bruno’s back. Bruno Bouchet was sacked from his role as producer for The Kyle and Jackie O Show back in 2012, after a series of tweets about a massacre at a cinema in 2012, but it appears that he is back with the program on its new network KIIS. Crikey readers may remember Bouchet, as his personal blog, brunolovesboobs.com was taken offline after its contents were revealed by Crikey earlier in 2012. The guest and talent producer lost his gig on the show as it was embroiled in controversy over Kyle Sandilands’ rants about a female journalist. Bouchet is back on social media, with his Twitter account that lists him as “Creative Content Manager — The Kyle and Jackie O Show”. While Sandilands has continued to broadcast despite his many questionable incidents, it looks like Bouchet has served his three years in the radio wilderness and is back on board. 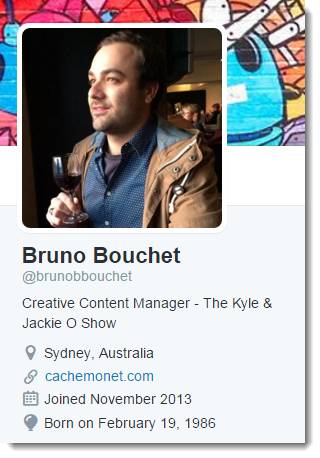 *Cough cough*. If you’re reading Crikey from your desk today, we commend you for turning up to work on a day when it’s estimated 200,000 people have pulled a sickie to get a four-day weekend. According to Australian Chamber of Commerce the cost of sickies is going to cost employers around $62 million, with a press release saying that workers should plan ahead and use their annual leave to get the benefit of a long weekend. Unions NSW sent out a press release last night saying we shouldn’t guilt trip those who take a day of annual leave today — though there isn’t any evidence anyone was doing that.

Full disclosure. The Sydney Morning Herald reported this weekend that the government had appointed two ex-judges as the public interest advocates to represent journalists sources under new data retention laws, but a tipster found the choice of reporter on the story interesting. The yarn was written by Hannah Ryan, a young journo who also serves as one of the vice presidents at the NSW Council for Civil Liberties, an organisation that has campaigned against the data retention policy. This wasn’t disclosed in the piece.

“The Institute for Public Affairs, known for its valuable and objective research.”

Dammit Crikey, you just blew up my irony detection device.

Did anyone ask them how they arrived at that figure? The ACCI puts out this rubbish every public holiday that doesn’t fall on a weekend. Last year, when Anzac day fell on a Saturday, business got a $532 billion benefit for nothing (my incredibly rigorous figure!)

And this year, the companies who pay by the calendar month will get a free day of work for nothing, and every person will miss out on the annual leave accrued for one day, when this leap year sees an extra day in February, amounting to a $957 squintillion benefit to business (my calculations again, very rigorous)

Sydney is a comparative ghost town today by the way. 99.9% of employees who took the day off used existing leave credits, not sick leave, as that would require a medical certificate issued on the day. (again, my rigorous analysis)

Gotta lurve IPA’s attention to detail & grammar with Q#3
“Australia as a history to be proud of.”
Perhaps it was meant to be ‘Australia HAS a history of which to be proud‘?
And they omitted Q#6 – “Are you an entirely wonderful, intelligent person who should have more free hot pies?’

The Betoota Advocate! It sounds great, maybe better than newsthump. The racists are certainly pretty dumb but they give us a good laugh. I enjoy baiting them in facebook, they get down and dirty pretty fast though.