A big coup for The Australian. Plus other media tidbits of the day.

Can a press release really be on background? The staff of a prominent Australian politician this morning sent around a rather anodyne press release about Australia Day. But what raised eyebrows in the Crikey bunker was the very top line, which contained a brief and not very important line given to journalists “on background”.

Background briefings can help make the work of journalists more informed and help steer them clear of obvious errors. But information given “on background” can also be a way to avoid accountability, with a journalist left to stake his or her reputation on the truthfulness of a claim without being able to be transparent about its source. A press release given on background is highly unusual — and not very helpful. — Myriam Robin

Rear Window scribe to Oz. Only a few weeks back News Corp was making journalists redundant, but there’s still money in the chest for battling Fairfax. The Australian has conducted yet another raid on Fairfax’s business section, luring across Rear Window writer Will Glasgow (courtesy of a rather hefty pay packet) to write “a new business column”, according to Saturday’s paper. Crikey understands the Oz has been trying to lure him over for some time, with negotiations started under former editor-in-chief Chris Mitchell (unlike his partner-in-crime Joe Aston, Glasgow managed to maintain a good relationship with Mitchell — while Aston was ripping Mitchell a new one late last year Glasgow got a nice little exclusive from Mitchell about the outgoing editor’s book contracts).

Glasgow’s only the latest in a string of poachings, which seem to have kicked off ever since The Australian hired Eric Johnston a year and a half ago. The paper is keen to take on the supremacy of the Australian Financial Review for business readers, a plan that seems to be kicking along under new editor-in-chief Paul Whittaker. Mind you, the Oz still hasn’t managed to lure over Gold Walkley winner Adele Ferguson, despite trying. And Aston is still at the Fin. Which is unsurprising, judging by the staggering failure of the last set of negotiations. — Myriam Robin

Latham to The Age? Mere months after its spectacular implosion, Mark Latham’s career seems to be blooming. First came a Triple M podcast, and, if The Australian is to be believed, he’s shortly to be signed up as a new columnist for The Age. The paper’s editor wasn’t saying much this morning, so we’ll have to wait and see on that one.

Meanwhile, to our piece on Friday that suggested the meeting didn’t provide proof for one of Ross’ central claims (that he was gagged on writing on the NBN by the ABC), New Matilda editor Chris Graham responded thusly:

“A story filed by Crikey argues that what New Matilda has published so far does not substantiate the claims by Nick Ross that he was gagged. While we respectfully disagree, that story wasn’t intended to prove Ross was gagged. It was intended to reveal the conduct of Belsham.”

Much of Graham’s piece looked at how other outlets hadn’t picked up the story (as well as expanding on New Matilda’s reasons for revealing the existence of the tape despite the legal risks). But as of this morning some have touched it, in their own way. In the Oz, Chris Kenny asked why the ABC didn’t rein in all its other journalists the same way it had done Ross:

“Despite his campaign against the ABC, the insight we get from Ross’s experience is not concern that his superiors attempted to exert some sort of editorial direction and restraint. On the contrary, it tends to raise questions about why such editorial oversight is notably absent in so many other contentious areas.

“If it was wrong for Ross to use the ABC for his campaign, where are the ABC editorial leaders restraining ABC journalists who campaign for a carbon price or on climate alarmism? Where are the interventions to constrain journalists campaigning against offshore processing or in favour of gay marriage? And who, pray tell, is counselling ABC presenters about protesting the felling of trees?”

And on his Daily Telegraph blog, Tim Blair reckons the illegal recording is the most important aspect of the story. He wrote a blog post saying as much on Friday, to which New Matilda responded by offering to send Blair the transcript of the tape, asking that he read it and see if he really thought there wasn’t public interest in writing about it. Blair’s curt response, put up on his blog, told Graham he was “trading in illegally-obtained material”.

Meanwhile, former ABC (staff-elected) board member Quentin Dempster, now at Fairfax, has this to say:

Why Bauer is doing so badly in Australia. From the Weekend Financial Review:

“Trevor Kennedy, the man who, with legendary editor Dawn Swain, presided over the AWW‘s highly successful move from a weekly to a monthly in January 1983, doubts whether “those Bauer people ever understood this market here. They tried to believe it was similar to the European markets”, where high circulation magazines, filled with cheap, mediocre content and little advertising, returned a good profit because they operated in much bigger population centres.

“But the relative demographics, which play such a large part in determining magazine budgets, are not interchangeable. Germany, for example, has 82 million people compared with Australia’s 24 million. Moreover, the 28-member European Union has a population of 500 million.

“This clash of magazine cultures, and the destructive effect of the brave new digital world on traditional print media, form the backdrop to McCabe’s resignation as the Weekly‘s editor-in-chief after six-and-a-half years in the job. The details of [AWW editor Helen] McCabe’s resignation, the unique position of the magazine she ran, and the struggle of executives at Bauer Media to operate 16,000 kilometres away from their Heimat, or homeland, make this an emblematic story for an industry in turmoil.”

On the independence of Chinese-language media in Australia. From the Lowy Institute’s Interpreter blog:

“The Australian Government allows the content of the Chinese language media in Australia to be heavily influenced and increasingly controlled by agencies of the People’s Republic of China (PRC). In turn this enables a foreign government to shape the outlook of Chinese language media consumers in Australia on global issues and, particularly, those relating to the PRC. As China’s role in global affairs increases, the scope of issues on which the PRC has an interest will only grow.”

Front page of the day. What a difference a new PM makes? Republic fever ahead of Australia Day. 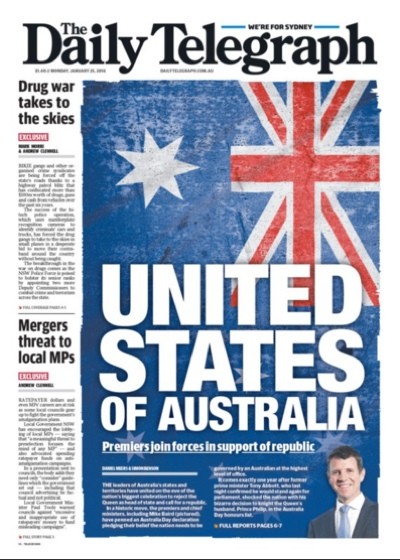