The census will keep your data ... shuffling the deck chairs at News ... Australian Open's sponsor not welcome ...

All your names are belong to us. In a little-reported announcement late last year, the Australian Bureau of Statistics announced it would retain, indefinitely, the names and addresses from the 2016 census. It says that the retention of addresses can “enable more efficient survey operations, reducing the cost to taxpayers and the burden on Australian households.”.

The ABS claims it will keep the data secure and will remove names and addresses from other personal and household information it is collecting, with the names and addresses stored separately and securely. No one who is working with the census data will be able to view name and address information at the same time as the other census data. It has conducted a privacy impact assessment with the Australian Privacy Commissioner before making its decision.

It isn’t the first time the company has attempted to keep a hold of all our names and addresses. The Australian Privacy Foundation notes people were given the option to have their data kept by the National Archives of Australia in 2001, and 54.4% opted for it. Then before the 2006 census, the ABS then tried to keep the data indefinitely, but after public outcry announced it would only attempt to make changes again “if it was acceptable to the Australian community”.

Has consensus on the census been reached?

Moving the deck chairs at News Corp. The Sydney-based tag team in charge of News Corp Australia, Michael Miller and Peter Tonagh, have come up with another joint announcement, this time shuffling the editorial ranks inside the Victorian newspaper division.

Crikey understands the changes were driven by the ambitions of Geelong Advertiser editor Nick Papps to return to Southbank in a senior role at the Herald Sun.

Popular veteran Jill Baker has therefore vacated the editor’s chair at the Sunday Herald Sun to make way for Papps. Baker’s new title is “executive editor, Sundays”, where she will oversee investigations and features supplements at a national level.

One Herald Sun insider asked the question: “In an era of redundancies, staff are wondering why a new position has been created for Jill Baker?”

Colourful Geelong mayor Darren Lyons will no doubt be happy to see the back of Papps, but is unlikely to get an easier run from his hard-charging replacement Liam Houlihan, who is the current news editor of the Herald Sun.

The changes are relatively low level, which begs the question why a three-page press release from the top brass in Sydney was necessary.

All the above mentioned will report to long-time Herald Sun editorial supremo Peter Blunden, who probably should have put the press release out himself, rather than going through the bureaucracy that comes with having two chiefs in Sydney.

Death warrant. A Sydney councillor has been accused of being insensitive towards the death of Sydney deputy mayor Robyn Kemmis on Twitter: 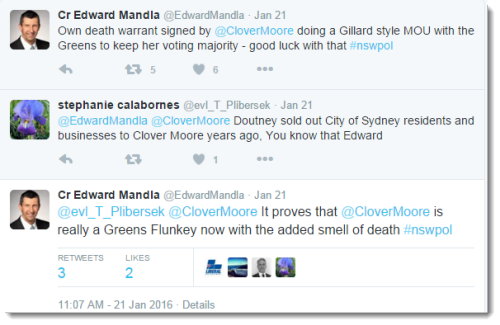 In a series of tweets, Liberal councillor Edward Mandla wrote that Moore had “signed her own death warrant” by signing a memorandum of understanding with Greens councillor Irene Doutney, and that Moore was a “Greens Flunkey now with the added smell of death”. While his comments also have a stench, it seems that Mandla has forgotten that this isn’t the first time that Moore has signed an MOU — she was also part of one with the NSW Liberal Greiner government in 1991.

Sponsor not welcome. Tennis Australia had had a cracker of a week, starting on Monday when the kick off of the Australian Open was marred by a BuzzFeed/BBC investigation into match fixing across tennis. Yesterday Andy Murray labelled the move to appoint William Hill as the official betting partner of the tournament “hypocritical” in light of the match-fixing claims. We find it odd access to the William Hill website is banned by the Open’s free wi-fi, specifically because it is a gambling site: 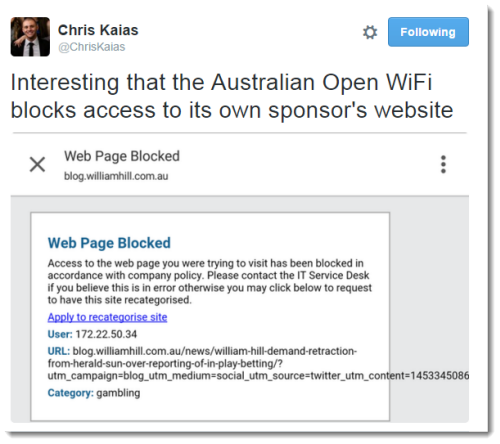 NRA shoots, misses. The National Rifle Association in the US has taken aim at Australia again, claiming that our gun policies amount to banning and confiscation. Along with dramatic music, the advert uses lines from the government’s campaign on the issue in 1996 to prove that our gun control is terrible and support for it is worse … 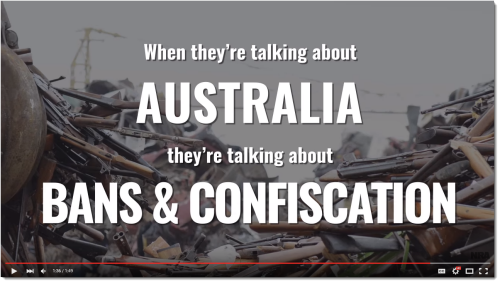 Your opening ‘sentence’ about, “All your names are belong to us” was apt, in that much of what followed it was about as good as the opening’s grammar; but we shouldn’t expect too much from Crikey, should we.
Apart of course from the Crikey Commissariat Censorship Team, which is almost always busy at doing what it doesn’t do well.

Not all your input is up to scratch either Norman, people in glass houses and all that.

I’ve often asked for people of your ilk, bushby jane, to provide an example of mine which is worse than whatever I’ve criticised on that thread; but the opening is still there for you to be the first, so carpe diem.
John Newton, it’s quite possible YOU would have such a problem, but even among the Crikey acolytes there aren’t many who’d find it as difficult as you apparently do, so carpe diem probably isn’t the term to apply to you, is it.

“All your base are belong to us” is popular culture quote lifted from a video game circa 1991.
Rather dates you, Norman… 😉