The power and the passion of Peter Garrett

Peter Garrett has lived a very interesting life, but his memoir does not include what we need to know: how someone speaking truth to power deals with finding himself in power.

What point is it at which the production of memoirs by Australian politicians occasions some form of intervention by the police to break the whole thing up?

There have been many provocations to date — Rob Oakeshott’s The Independent Member for Lyne, Christopher Pyne’s pieties, and everything by Chris Bowen. But Peter Garrett’s Big Blue Sky might be the one that does it.

That’s not because Garrett’s life and career are without interest. Quite the opposite. I mean, duh. Iconic singer in a legendary band who passed through activism to lead the country’s largest conservation body, and then into Parliament, for Labor rather than the Greens. Garrett has had three interesting and important lifetimes, where many political memoirists have barely had one.

So why does Big Blue Sky read more like one of those Dictionary of Biography volumes (Northern Approaches: Memoirs of Queensland’s Longest Serving Minister for Aviation Support) than the ripsnorter it should be?

Why does one feel, as one does with other memoirs, than you’re not so much reading as prospecting, looking for flecks of gold amid the flow of mud?

The fault lies in the genre itself, and the whole way in which the political memoir process has become a production line. Pollie does his career, exits in triumph or ignominy or both, big publisher gives him a contract, and he comes back X months or years later with a manuscript, which lands on the gift-for-dad market.

The childhoods are pretty much the same, coming in at about four basic types, but you have to wade through them in case, when he was 12, the author killed a guy.

Peter Garrett, innovative as he and Midnight Oil were in reshaping musical form, does not buck the trend. Growing up in Pymble, he recalls the sights, sounds, etc, of post-war Sydney, fibro suburbs, long evenings in the streets, days at the beach in the Holden, uni in Canberra and on and on and on.

The book begins to grip when, during his 20s, Garrett’s mother is killed in a fire at their family home — a fire that Garrett himself survives, with the added weight of guilt and loss.

But we’re all really waiting for the moment when the music starts to take over, and Farm, the early ’70s rock/blues/proto-punk band Garrett has joined, morphs into the Oils, and something really new starts to happen.

Midnight Oil, like them or loathe them, were important nationally, even globally. They took a range of influences — surf music, pub rock, sound collage — and put them together with lyrics that expressed in plain language the suspicion and sense of alienation of Fraser-era Australian politics.

The book starts to get really good when this starts to take off and the band acquires a passionate following up the NSW coast, and then nationally. They channelled an anger that a lot of people were beginning to feel at the lost promise of the Australian fair go, the real one, which seemed possible in the ’70s.

As it failed to materialise in the ’80s, and as it became clear that Australia was to be a carve-up between mates with clout, the Oils expanded their musical and lyrical range, with multi-layered dystopian mini-operas such as The Power and The Passion.

They never did much for me, but they cast a near incantatory power over people who grew up with their music. When three Melbourne hackers, one of whom might have been Julian Assange, released the “wankworm” virus onto the internet in the late ’80s — a program designed to jam up US military computers — the first page of the worm included a quote from a Midnight Oil song (“You talk of times of peace for all and then prepare for war”).

Garrett’s writing is a record of those years, and the way in which the band became the go-to benefit headliner, made links with indigenous peoples and groups such as Warumpi. But a lot of it is inevitably unshaped, a record of goings back and forth, loading and unloading, with a lot of story, but lacking a certain viscerality.

What did it feel like, the reader wants to know, to be this sort of band on the road? What did things look like, what were the arguments, the conflicts, the, well, power and the passion?

Ditto with the years in the Australian Conservation Foundation. I remember stories of Garrett being a fearsome meeting chair, determined to put some order into an organisation that still bore traces of a looser earlier era — and thus simultaneously doing much good and causing much hurt. The book bought those stories back to mind, but it would be good to have them in it.

We could do with more of such material; of others we could do with less. In older political memoirs, personal life scarcely appears at all, an omission. In these chuck-it-all-in books momentous struggles get equal time, and equal emphasis with doing up the house at Mittagong, etc. The prose breaks down to the quality of pub yarn and yak. There’s too much of it, and fore- and background get lost.

There may be a degree of special pleading here, for the final section, of Garrett’s years as a cabinet minister, have something important to address, and that’s squaring the angry, beat-driven argument that Midnight Oil made about power and deceit with the compromises necessary to being part of a government laced into the US alliance and run by Kevin Rudd, a back-corridors man with a taste for governing by announceables.

This was a pretty important issue to address. After all, Midnight Oil weren’t singing passionate anthems to gradual reform within the perceived possible frameworks; they were summoning rejection of the usual hypocrisies, and counterposing “power” to “passion”.

I’m not sure Garrett is fully aware of how disappointed how many people felt — many now in their 40s and 50s — at the way in which a standard bearer of the voice of the “others” slid so easily into the frontbenches.

No one went to a Oils concert for the harmonies after all (Garrett relates how, to improve his voice, he went to a singing teacher, who sacked him as irredeemable), and umpteen bands rocked as hard.

It was the fusion of words and music, the sense of an urgent truth-to-tell that gave the Oils their edge. Garrett’s prevarications about matters such as Pine Gap, a place some of his fans spent much of the ’70s and ’80s trying to close down — and against which he ran as Senate candidate for the Nuclear Disarmament Party in 1984 — don’t begin to fully address the issue of how one thinks about the changing nature of politics, the matter of age, or the bitter business of life.

Life is what Garrett has had, and from it, a more intense and moving memoir might have been made. But that would require a degree of thinking about what such memoirs are for, and the different ways there might be of writing them, varied for the life concerned.

If nothing else, a co-written memoir/autobiography would eliminate some of the terrible writing that lurks among the many compelling passages. When Garrett gets hold of a bad metaphor he doesn’t let it go. ANU is a “buzzing kaleidoscope”; young love is a “ship of fools that eventually rights itself and goes in search of the One, as it has since the first of never”. And so on.

Such phrases are reminiscent of Oils lyrics, which often sounded as if they were written on the back cover of a school exercise book, and from whence came much of their power. They’re less welcome between hard covers.

Nevertheless, among the 400 sprawling pages there’s a lot of great passages, and the inside story of a man who set the agenda for many — many of whom now 40-something public servants — who will buy it as much for insights into recent policy formation as for the hits and memories. The passion, then the power.

Big Blue Sky is published by Allen and Unwin. This article was originally published at Daily Review.

Peter Garrett and the best of both worlds 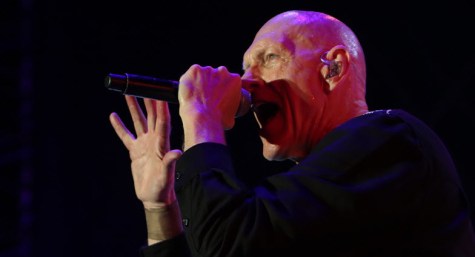 Burning the midnight … what!?