Media Watch stands by its story about then-ABC tech journo Nick Ross. Plus other media tidbits of the day.

Media Watch v Nick Ross. The ABC’s Media Watch says it stands by its story from 2013, in which host Jonathan Holmes said he thought it appropriate that then-ABC technology journalist Nick Ross had been spoken to about the advocacy of his work.

In a recent AMA on Reddit, Ross said the ABC had never contacted him about the episode (it contacted his manager), despite focusing almost exclusively on his work. It took Ross calling Media Watch before its reporter spoke to him, at which point, he wrote, he was told it was too late to change the script. He also says Media Watch cherry-picked quotes from his work over two years to make him seem like a biased journalist.

In a statement, Media Watch said it was standard procedure to approach “the journalist and the person ultimately responsible for the publication” for comment.

“The person who ultimately replies depends on the organisation. In this case, Nick’s editor replied, and those responses were included in the story.”

“Media Watch did speak directly with Nick and the central points of the story were relayed to him. Media Watch disagrees with Nick’s characterisation that it was planning a ‘hit piece’ or that he was not contacted. We also reject the suggestion that Nick was told it was too late to make changes to the script.

“Media Watch stands by the story and the research methods used.”

After the episode, Ross says, he was ostracised within the ABC. He was no longer used as talent on many ABC programs in the way he had been in the past, and many ABC websites removed links to the technology portal he ran, and so the traffic to his articles plummeted. — Myriam Robin

Union turns to the people. The ABC is in negotiations for its triennial funding round. The final outcome will be unveiled in the budget, but in the meanwhile, the Media Arts and Entertainment Alliance is calling on citizens to email their local MP to ask for an ABC funding increase.

“After the savage funding and job cuts under the Liberal-National Coalition government, this is the best chance to fix the ABC and set it on a sustainable path as the national broadcaster for all of Australia — both urban and regional — in the digital age,” Paul Murphy says.

So far 600 emails have been sent through the MEAA portal created for the purpose. — Myriam Robin

Today in radio news. Miranda Devine quits her 2GB show, but Mark Latham starts up on Triple M. You win some, you lose some.

Cleo‘s last centrefold. Lisa Wilkinson got rid of Cleo’s Mate of the Month feature when she was editor. Canning the popular feature was controversial, but, she felt, an important step with the times. As she wrote in The Huffington Post this week, she justified the decision to a sceptical Kerry Packer thus:

“As far as I was concerned, getting rid of the centrefold was the best statement I could make that this magazine, so linked to its ’70s birthplace, had moved on, into the go-ahead ’80s. We got the joke: blokes had their Playboys, we girls could do it too. But we had done it. We’d delivered the punchline. For 13 years now. It was time to move on.”

Wilkinson replaced the centrefold with the Cleo Bachelor of the year. But before that, she did publish one centrefold, which Crikey found in the archives. It’s of Mel Gibson, wearing, well, everything … 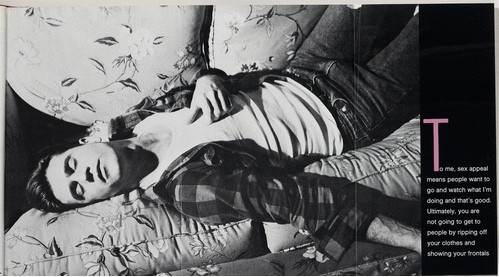 Front page of the day. Lleyton’s swan song comes to a close … 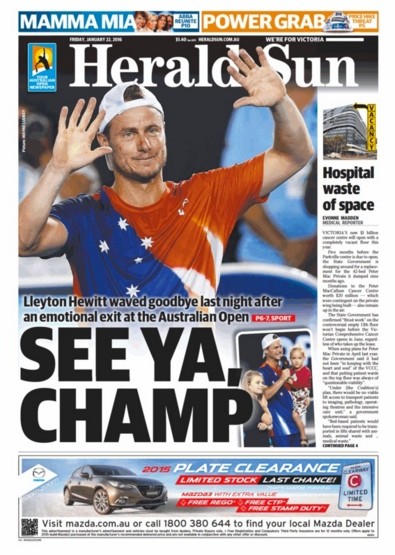 Media briefs: Cleo folds … truth is out there … Palmer under fire …