At least it was’t lumbersexual. The Macquarie Dictionary has named its Word of The Year, and even though it’s technically a phrase, Ms Tips approves. According to the committee, the word that best represents 2015 is “captain’s call”. The term, which former Prime Minister Tony Abbott used to describe the decision to award Prince Philip a knighthood, is defined by the dictionary as:

“noun a decision made by a political or business leader without consultation with colleagues.” 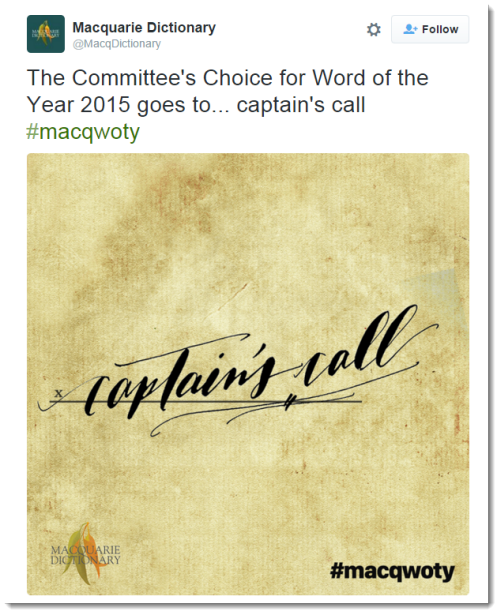 The committee, which is made up of academics, journalists and the editor of the Macquarie Dictionary, said:

“Captain’s call perfectly encapsulates what happened in Australia over the past year. There has been an interesting change in usage; an infrequent item of the jargon of cricket makes the leap into politics and is now being used generally with an ironic tinge to it that is very Australian.”

The committee gave honourable mentions to “lumbersexual” and “deso”. Voting is now open for the People’s Choice Award, where people can vote for their favourite word in a number of sections. Options include “sharing economy”, “bae”, “listicle” and “fur baby”. If you’re unsure on how to use any of these words, here’s a sentence we prepared for you:

“The lumbersexual ignored his bae and made a captain’s call on the name for their fur baby.”

“Gina inherited a company that was mired in debt and business difficulties. As a widowed mother of four she worked to turn around the company to become the incredible success it is today.

“In the last year, she has finalised the world’s largest private company mine financing to create the Roy Hill mine. In the process, she generated thousands of jobs and tens of billions of dollars of future wealth for our nation.

“Yes, the Roy Hill shareholders will also share in those billions but so they should. They have taken enormous risk to produce an incredible result and none of it would have happened without Gina Rinehart’s efforts and determination.

“Along the way, media reports suggest that her company has paid over $2.3 billion in taxes over the past four years. On top of that, Gina Rinehart provides many more tens of millions in donations to worthy causes. Unlike some other noted philanthropists, this giving is often done with little fanfare or media attention.”

That is only the start of Bernardi’s love letter to Rinehart. He goes on for 400 words, ending with: “It’s probably not politically correct to nominate a person like Gina Rinehart for Australian of the Year, but in my mind she deserves the honour.”

Is Rinehart running a campaign to be Australian of the Year?

Treasury insight. Want a preview into what Treasury has planned for 2016? Next Thursday will be the first appearance of Joe Hockey and Tony Abbott’s favourite Treasury secretary in John Fraser, the former UBS banker and mentoree of John Stone when he ran Treasury in the early 1980s. Fraser will speak at Gerard and Anne Henderson’s Sydney Institute, but the invite doesn’t say what the address will be about. We’re on the edge of our seats.

Brandis transparency greatest hits. Following the news yesterday that Brandis had appealed an Administrative Appeals Tribunal ruling that his office would have to process a freedom of information request for his diary for his first eight months in office, a tipster told us to check back on what Brandis had been saying in opposition about transparency. As the tipster wrote: “Hansard has it all … And it is very different from what he is saying now.”

Brandis in 2013, on Labor’s failure to make FOI more expansive in government:

“Operation Sunlight, you might recall, was the much vaunted policy that the Labor Party took to the 2007 election that was designed to promote transparency in the field of both whistleblower protection and freedom of information laws. It has produced this result: information is more restricted today than it was then and whistleblower protection has been delayed through the life of two entire parliaments.”

Brandis in 2012 on the Coalition agreeing to exempt the Parliamentary Budget Office from FOI:

“We in the opposition of course take a more expansive view of freedom-of-information laws than the government; nevertheless, we are persuaded that, in certain circumstances, the protection of confidentiality in a process such as this is a more important policy consideration than freedom of information.”

Brandis in 2010 when the Rudd government greatly expanded the FOI Act and introduced the Australian Information Commisioner that Brandis is now trying to shut down:

“Freedom of information laws operate on the assumption that, unless cause is shown by government why information ought to be withheld from a citizen, the information should be available to the citizen.”

It is worth noting that the Office of the Australian Information Commissioner was handed another three-month lifeline yesterday as the government still struggles to get legislation through the Senate that would shut the office down. An interesting point from the passage of the 2010 amendments to the FOI Act is that it was Brandis who forced the government to reverse the onus of proof when someone challenges a refused FOI request in the AAT from the person seeking the documents to the government. That certainly backfired on him.

Nailing down Palin. Yesterday we asked if someone could translate a section of Sarah Palin’s Donald Trump endorsement speech. Luckily one of our loyal readers has provided this transcription:

“How about the rest of us, right? … Right-wingin’, bitter, clingin’ [I first thought she meant beer-clingin’, which I’m for], clingers of our guns, our God’s in our heart, our religion’s — in our Constitution, tell us – “

He also provided the following context — turns out it makes more sense (in a Palin kind of way), than we first thought:

“The first reference is to President Obama’s Kinsley gaffe in 2008 about white working-class males who vote for the same people who have spent decades destroying their standard of living: ‘They get bitter, they cling to guns or religion or antipathy to people who aren’t like them or anti-immigrant sentiment or anti-trade sentiment as a way to explain their frustrations.’

“The second reference is — hold on, shocker on the way — Palin remembering something in the US Constitution that isn’t actually there. As you know, Christian rightwingers (including Ted Cruz and Marco Rubio) don’t believe that a heap of atheists, deists and humanists got together in 1787 and wrote a Constitution that created a secular republic dedicated to the separation of religion and the state (it’s only in the first of ten amendments). People like Palin ignore these minor facts and seek to undo the Constitution by creating religious tests for public office and manufacturing a ‘war on Christmas‘ while calling themselves constitutional ‘originalists’ and glossing over the fact that the Constitution famously references the deity just once, in the very last sentence, where the year is described as the ‘Year of our Lord.”

Thank you for that, it’s clear as mud now.

Australian inventions. A Reddit user has uploaded a video to YouTube using a Masterfoods tomato sauce packet, with the caption “Australia has beautiful people, a beautiful country, and these magical fucking sauce dispensers”. Turns out the humble sauce packet is more special than we thought: 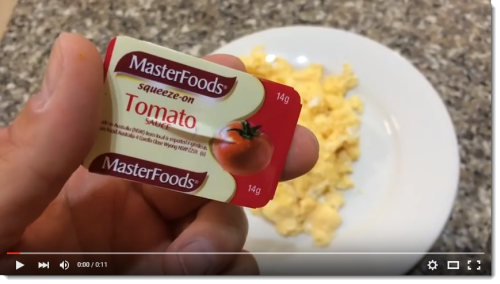 What a great way to degrade “Australian of the Year” contests?

“Nailin’ Palin”? Isn’t there documentary on that?

For an even more detailed version of “Nailin Palin”, you need look no further than this excellent account from one of Crikey’s own former stars.
Amber Jamieson in The Guardian http://is.gd/Atr85I

Could Borey Carnadi be angling for Rhinohide’s endorsement, via Blot as the next Dull White Dope, the Abbottrocity being no longer useful?

It seems no one on the committee was aware of the far earlier use of captain’s call in sport, back in the days before the theatre which nowadays passes for sport.